But lest you think that non-falsifiability is a good thing, it's not. For an idea to be considered scientific, it should be falsifiable.
The idea that "dark matter is the number 9" is not a good hypothesis just because i don't know how to falsify it.

If you think your idea is useful in some way, it's up to you to describe how it can be useful and I haven't seen you do that. I gave you the example of Garrett Lisi who said his model predicts certain particles with certain properties and if the LHC finds them, it's a useful model. Since the LHC didn't find those particles, then the model is falsified, so it was clearly falsifiable by not finding the particles he predicted.

What would falsify say, the WIMP model would be to search the parameter space they are predicted to be in, along with around the edges too... Once the model becomes highly untenable or problematic to further fit into the observed evidence for Dark Matter, we can conclusively say "What ever it is, it is not WIMPs"

That was already done with other models for Dark Matter such as MACHOs (MAssive Compact Halo Objects) such as neutron stars, blackhole clusters etc that could occupy a halo like structure in a sphere throughout the galaxy (not compressed down into the spiral arms) And searches showed that, its a highly ruled out solution and such the model is falsified.

As pointed out, pattern finding can indeed be useful, though that pattern is almost born out of the model, rather than building a pattern to give rise to a model as an emergent property. The usefulness comes in its predictive nature and its observables. If it predicts a dark matter candidate, then what kind of particle is it? what should be its mass range and interaction strength.

I don't even understand it.

Then it is up to me to help not only you to understand. But anyone else who reads my theory.

Abstract: The Higgs Mechanism is not completely observed or understood.

My model will explain some aspects of the mechanism which is in itself a quark emergent mechanism.

I will explain it in an alternative way. I won't be naming any particles (except for quarks and the gluon (matter particle)). But, instead. By way of charges and colours using a simple form of geometry.

This model will explain some aspects of the Higgs Mechanism in an alternative manner, using charges and colours.

There are some interesting aspects to this model. And, I do not offer all the answers. But will point out some of my observations of this model.

Some of these interesting aspects include. A re naming of the quarks to give their names a function and meaning, a possible candidate for D/M D/E, an explanation for gluons and a wave function maths to explain the D/S experiment.

The maths used may be useful in other applications not yet known.

This model will offer new information of a different kind. Which i hope will help to find some answers by offering this new model.

This is an alternative view using waveform maths instead of a single photon.

The waveform is made of 3 points. (-1) (0) (+1). They propagate as a parabola or equilateral triangle where, (0) sits at the front of the wave. It is implied and manifests as real. And, is returned to the system it was implied from upon annihilation
at the wall. Leaving the (-1) and (+1) charges to reach the slits in the wall.

The waves have their own sets of axis'. And, when they pass through the slits. The 2 waves propagate towards the detector screen. They cause an interference pattern where each intersection point implies (0) to manifest as real. And, an entangled area is instantly created by the building of a framework made by the 2 source waves at up to the speed of light c.

Entanglement is a shared relationship between charges (-1) and (+1) from within 2 sources (waves) at distance.

This maths behind this quark emergent mechanism are connections of charges in a geometric pattern.

Using only colours and the charge connections from tables arrived at while having to explain 3 points to represent a wave in my D/S exp explanation.

I realised i would need 3 axis' with the 6 ends. These axis' are A, B and C. And, the ends are obvious. It is a function. Directions.

As i had been gifted a combination which would develop into a set of charges and their connections. The combination being 3 x 6. I explored the other combinations of how to reach 18.

These charges do not include the central position 0 at the intersection of the A, B and C axis'

These charges are the first energies to emerge from the mechanism.

I believe they should be considered as candidates in the search for DM/DE.

Although i don't know their exact location. They seem to encircle the mechanism. Every other action after this action will be inside the effects of this action.

The tables are colour and charge connections.

The next table is the 6 x 3 connections.

These contain a 0. Which is the central position of the intersecting axis' A, B and C. And they pass through the 0 from and to their connections.

The image of this table looks exactly the same as diagram 4 above.

There is a difference though.

The lines don't pass through the central 0. But, seem to be bounced/repelled off the 0.

There are 2 same patterns overlapping with this and the above diagram. I have no suggestions.

The 18 x 1 table is connections of all individual charges.

They form a cube shape. Where each corner of the cube is held together by a (0). Which is the matter particle. There are 8 corners. 8 gluons.

The anti quarks. Which have opposite charge to quarks are shown as an example in diagram 6 below.

The final diagram 7 is all diagrams in one.

Except for the diagram 3 action. Which i have placed around the outside. Otherwise. It would obscure the charges.

All particles are represented as charges and their colours. And although i cannot offer more information on my model. I hope it will prove helpful by the different information it contains. Especially the possibility of candidates for DM/DE.

Thanks to every person who ever made a difference.

With special thanks to Arbitrageur. Who i regard as equally responsible for this model. And, without his dogged persistence and endless supply of knowledge. I would never have been able to achieve my model. You are an inspiration.

And. Although i realise that i actually know nothing. I hope i am now a little less ignorant. Thank you.

Do you have any suggestions?

That seems as if you understand it.


originally posted by: blackcrowe
With special thanks to Arbitrageur. Who i regard as equally responsible for this model. And, without his dogged persistence and endless supply of knowledge. I would never have been able to achieve my model. You are an inspiration.

That's shocking since I think I've been clear that I don't understand your model. This is clear, right?


originally posted by: Arbitrageur
I don't even understand it...

So I don't think I deserve any credit for something I don't understand, but thanks for trying to explain it further. I followed what you said in your latest explanation up to this point:

I keep beating you over the head with Garrett Lisi but I bring him up again to hopefully illustrate why I can follow his line of thinking, but not yours.

The idea of plotting a charge space from -1 to +1 with 0 in the middle on a single axis makes perfect sense. Garrett Lisi does that at 6:35 in his talk, and shows this diagram, with some familiar particles clearly labeled. Note the quarks have fractional charges so in addition to the -1, +1, and 0, he also has points on the axis for +1/3, +2/3 -1/3 and -2/3 so he can label the quarks: 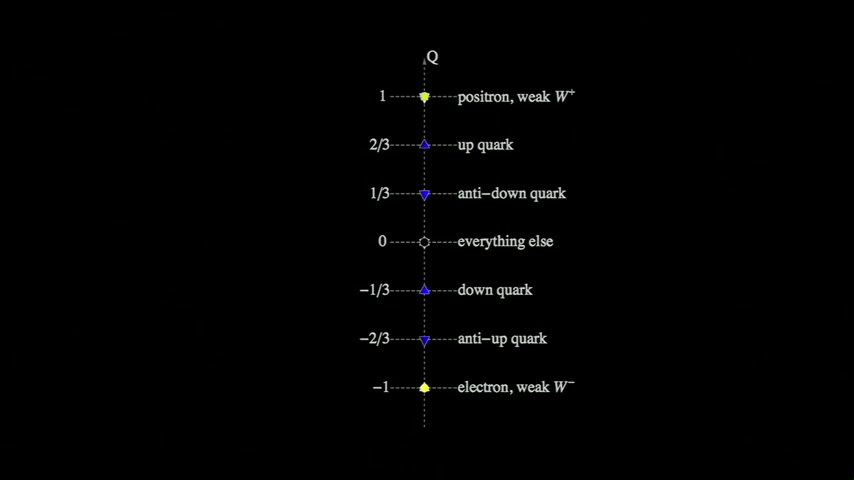 So far I understand exactly what he means by his charge space as the particles are labeled, it's very clear. He then keeps the charge scale on the vertical axis and shows the charge components like weak hypercharge according the the electroweak unification model: 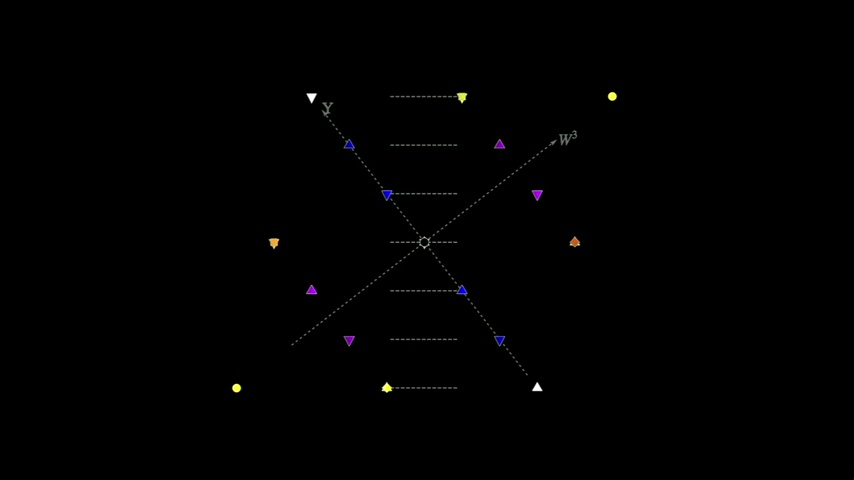 Again this looks very familiar to me, it looks like a slightly rotated variant of the electroweak figure on wikipedia: 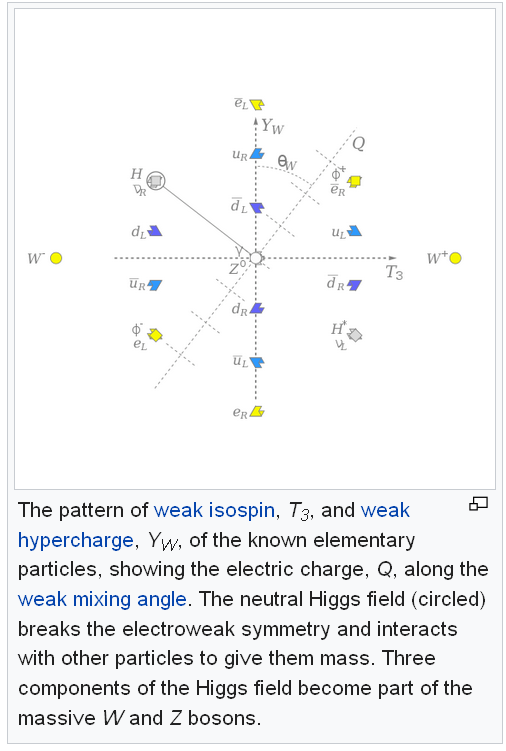 There were several Nobel prizes awarded for that electroweak unification work so that speaks highly of the research.

As he then works in higher and higher dimensions what he shows becomes less familiar but I understand these foundations of his model so I have some idea of what he is doing even if I don't understand all the details.

But when I get to your explanation of "The (0) is implied. And, manifests as real.", that reads a lot to me like "Dark matter is the number 9", which as I said before I don't know what that means either. A number by itself like 0 or 9 doesn't mean anything to me unless it's put in some context of some experiments. "manifests as real", manifests as what, exactly? That's where I got completely lost and I went on to try to understand what you're saying about the double slit experiment but I don't follow that either. I also looked at all of your diagrams but I don't understand what any of them mean, so, I'm still totally lost in trying to understand your explanations. I see a bunch of (+) and (-) signs and a lot of geometric diagrams but I don't have the faintest clue how any of those relate to, say, the electron, with charge -1, or the neutrino, with no charge or charge 0.

Regarding this statement: "This maths behind this quark emergent mechanism are connections of charges in a geometric pattern.", what "quark emergent mechanism"? You introduce that expression without defining it, are you talking about the strong force? The strong force operates completely differently than electromagnetism based on charges. And I see you reference "the maths behind" without actually showing any maths that I can see. So hopefully this explains why I'm totally not understanding your model.

edit on 2019419 by Arbitrageur because: clarification

Unfortunately. I cannot explain my model any better than i have.

I do appreciate all your points.

Thanks for looking at it.