You need to go and have a lie down mate, i voted out but I am unsure as to what you are insinuating other than violence "stuff the consequences, do what needs to be done". What will YOU be doing about it , or will you just be hoping to inspire some clown to do something on your behalf 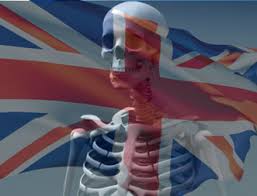 I wonder what the history books will say about the British nation in a hundred years and more - the good , the bad and the ugly will hopefully be remembered, but also the glory of the achievements. Hopefully the nation will be remembered for the Magna Carta and people will some day yearn for such again.

I wonder will the EU allow us to keep the name of our country as a token gesture?

posted on Apr, 11 2019 @ 05:41 AM
link
May + others are collaborating with the EU to keep us shackled for all Eternity, whilst publicly proclaiming she/they are for the 'leave' side.

Never trust a tory. At all. Ever.


Never trust a tory. At all. Ever.

and becoming takers and never makers of any rules.

Why does Theresa May need to be strung up? It is the MP's that need stringing up, not the PM. Every possible deal that has been put before Parliament has been defeated, including last weeks farce when 9 differing options, including no deal, were rejected in one night.

When the deal has by law to be signed off by Parliament and that same Parliament cannot agree on any options at all, what exactly is the PM supposed to do?

I fully realise and accept that she hasn't covered herself in any glory (far from it) but to blame May seems to rather be missing the point.

If you wish for someone to blame, maybe try starting with all of those MP's that promised to honour the Referendum and have since consistently blocked any attempts to get a deal through Parliament.

I am a Leave voter, I want to get that in their first just so people don't have to guess. Now on the delay part of all this I'm surprised its only up to October, I was truly expecting them to "offer" a much longer term so there's that I really though they wanted to try and force us to new agreement for their next budget increasing our contribution to their budget but I've also come to the realisation that we're never getting out. We are literally never going to get out with the current crop of politicians we have in parliament, there are over 400 MPs who are remain and 160 (roughly) who are leavers and in the end I think this is how it'll go down:

Sometime in the next two months May will announce binding votes in parliament for where to go next, he will say that the MPs will get to vote on a few different options again and this time it'll be binding. She will give them a new referendum, her deal or revoke and a new vote will win, yes not revoke, most MPs are hoping the people have changed their minds so they wont revoke but instead will give it back to the people and most leave voters will just not bother to vote this time around because they believe our voices won't be heard and remain will win out and we will stay while being humiliated o the world stage because our politicians are yellow bellied and on that day democracy will die in the UK.


Yeah that's more or less exactly what is happening. They should have prepared for this years ago and I doubt that they prepared anything at all.

I actually dinnae care about brexit any more , I know its just to steal our wealth and our rights !

In my opinion anyone who supports the government now is the enemy of the people !

its Us the people of the UK vs them , the politicians , thieves and bandits that they are!

that's just my opinion on Brexit and our government , as for you , well you come off as a bigot
you basically sound like a whining petulant child , notice how you made out all the groups of people you hate as being politically opposed to your own opinion !

I'm sure there are some leavers who are SJW , Gay , Feminist , Gender fluid and vegan !
But its cool just band them all together as opposed to your stance on Brexit !

and to be perfectly honest who'd want to side with you since you hate so much !

I’m not a fan of any type of “call to arms” and I’m not sayings that’s what your doing, but it can be interpreted as such so with that said...

You’re saying it’s “time to rise up” but you yourself are not rising up, you are on a forum stating such. Where are the brexiters on the street? I guarantee you, should brexiters take to the street, should their be riots, there would ABSOLUTELY be a quick deal reached.

You know why here in America they haven’t taken our guns? Because every time they try, in whatever state of the union from liberal to conservative, actual Americans take to the streets. We believe in our rights and we take them very seriously, so they try to trickle it in “maybe just the criminals shouldn’t have guns... maybe you don’t need automatic guns” etc etc. it’s similar to what’s going on with Brexit now...

“Maybe we’ll leave in two years... just give us another week... ok now until October” I’m 90% sure unless the populace rises up, it’ll continue to be delayed until your next election when surprisingly all the candidates will “run on remain” so when elected it will be used as a de facto referendum. “Well they voted in the _____ party so that means they want to remain now”

Sad times looking from afar... I hope you guys figure it out.
edit on 4/11/2019 by PsychoEmperor because: Typos

I blame all of the Parliamentary remoaners but May has stuck to her "it's my deal or No Brexit" mantra , her deal is signed off by the EU because it suits the EU , she is a remainer and as far as I can see she holds much of the blame for the stalemate we are in.
I don't think anybody should be strung up but metaphorical heads do need to roll , May has failed so she should be removed now , we are about to spend upwards of £100 Million on EU elections even though we were supposed to have left by now.

what about the fact they have wasted millions , shouldnt they be banned from being politicians or sitting on any kind of government !

They have failed drastically
they should all be fired !

Christine Lagarde showed the world that you can be less than competent with money and get away with it , she was convicted of financial improprieties with public finances yet kept he job at the IMF.

No doubt May and her cohorts will get their reward when they're dumped from office.
edit on 11-4-2019 by gortex because: spelling

You know I think the Queen would be laughing a hundred years ago we fought wars over this kind of thing !
ensuring that the crown was one religion or a another and sovereignty didnt fall into the wrong hands !

I bet she is tickled and doesnt care !

Now its governments who deal with the way the country falls , and right now we are in the hands of the EU

Im sure there are a few already in the tory party who have lost a few million already over brexit mistakes and they just fire them into the back bench and hide them away !

what about the tories who secured the ferry deal , havent they already lost millions !

posted on Apr, 11 2019 @ 11:42 AM
link
a reply to: Flyingclaydisk
Let me give you a quick history lesson. A couple of centuries ago we had civil war, like you. The king then Charles the first wouldn't play the game so we chopped his head off.
Then after a couple of years we invited his son to become king, that was Charles the second. He was made king on the understanding that from then on the monarchy would not interfere in the politics of the country. Only doing a few ceremonial rolls with NO POWER.
This still exists to this day, bbbuuuttt, when the Queens son inherits the role he will be Charles the third and he can't keep his gob shut and sooner rather than later he will cause some nasty conflicts in British government.
I hope that helped.

I think he was seriously let down when Mueller came up with nothing.