B-21 Raider: Next step, First flight! 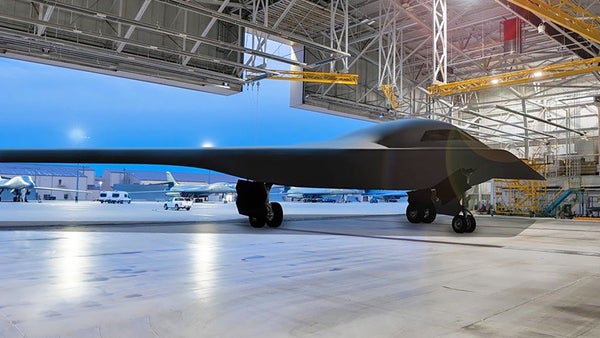 Now you got me wondering about that one thread where there was that supposed B-2 photo that we didn't think was a B-2. Could that of been a mock-up of a B-21? I was reading that they have a non flying iron bird that they use for development and to test integration of systems.

I think they may be suggesting there may be a built ‘model’ but my experience of ‘iron bird’ were test rigs that were not requiring a mock up of an aircraft. In fact they did not even physically represent the aircraft.

I went in the Nimrod mockup which was used for designing the crew station’s and from the outside it did look like they had cut a fuselage off an aircraft, but it was inside a hangar inside a wooden scaffolding.
edit on 15 8 2020 by Forensick because: (no reason given)


originally posted by: RadioRobert
I would be stunned if they actually have even a preproduction model "near completion" five months out from CDR...


Just more evidence that the program was always further along than they let on. I still think they basically had near prototype aircrafts flying during the competition, not just some cobbled up tech demos.

First flight pushed back a few months into 2022...

first flight of the LRIP bird ...

posted on Jan, 15 2021 @ 06:13 PM
link
Rollout is now expected early next year, with first flight around mid-2022. A second airframe, which sounds like the static test bird, has begun production.

"workers figuring out “how to build the airplane,” which is more than just “how the drawing tells you to put it together.”

No matter, the experience with previous designs, no matter the advances in computer simulations, it's still the good old fashioned way of actually doing something, then thinking "Well, it could be a bit better if we do it like this..."

posted on Jan, 21 2021 @ 05:14 PM
link
Do not scale this drawing....Always a useful note on an engineering drawing..These days a lot of the drawings are digital and fed into a CNC or 3D printer.

if it is the static test bed than what would they need to add?

i assume that everything would be ready to go?

Need to add for what?

powerplants maybe? i would assume all the bells and whistles as far as electrical/hydraulic/man and sub computer systems installed, other than MAYBE powerplants what is there to build.

seems like a waste, with all the flights of the F117's plus other ways to test systems exist rather than pushing something till it breaks, we can do that in computers now.

what do you think the loser in this 'race' is doing these days? chopped up and put into the sand?

i find that hard to believe, it would be interesting to see it adopted into the family.

Computers aren't always accurate. Computer modeling on a recent commercial test said the wing would reach 150%+ but when they did the actual test, on the actual wing, it failed below 150%. Real world testing is still important.

do you think the 21 will be a solid piece composite shell wrapped arrange its interior?

what do you think the 'other' is doing these days? i really hope not falling under the UFO(Un Funded Opportunities) section.

originally posted by: penroc3
a reply to: Zaphod58

do you think the 21 will be a solid piece composite shell wrapped arrange its interior?

what do you think the 'other' is doing these days? i really hope not falling under the UFO(Un Funded Opportunities) section.


How would you service it if you built it inside out?

Interesting article that talks about the manufacturing processes and thoughts behind the B-21.

Seems to loosely peg the First flight in the vicinity of 2022 and IOC circa 2026. Not sure if these dates have been mentioned before - I've been out of the loop for a while.