Seriously. If it comes out that this was the handiwork of anti-Catholic and/or Muslim immigrants the yellow vests are going to go ape s***. Could very well be the straw that breaks the camels back.

My understanding is that they need to be due to their harboring and aiding terror cells’ movements into America. AS WELL AS the many other things they take part in.

Coworker above me has already completed her interview with Tucker. Not sure when he will air her’s or mine. Stay tuned.

Not to down play the tragic loss of this landmark, but The air quality should be a major concern as well..

The effects to public health were quietly brushed aside during 911.

The cathedral has Lead in the roof..

Look at the color of that smoke..

Those soldiers thought they were fighting for their country.

It caused many to become disillusioned.

Blame the ones who started illegitimate wars.

I used to feel the way you do back in my early 20's. But I was wrong. If you're not in the military you cannot even fathom what these men and women do on a daily basis. The amount of protection they provide for U.S. citizens is invaluable and largely occurring behind the scenes.

I agree that the NeoCon wars were bull# but that's not reflective of the soldiers that put their lives on the line with noble intentions.

If you haven't been paying attention to this thread, there's an active Marine who posts here in between putting his life at risk on a daily basis. That deserves your utmost respect and I'm beyond reproach on that.
edit on Mon Apr 15 2019 by DontTreadOnMe because: Do Not Evade the Automatic Censors

How have Snowden or any of the other people you showed made us any more free? Just because they showed us our chains, that previously were invisible, doesnt mean they have done anything to actually free anybody.

posted on Apr, 15 2019 @ 02:05 PM
link
No Words...just so HEAVY, on so many Levels that this Beautiful, Historical, Spiritual piece of History is in flames. need to take a minute to process the loss before dealing with the facts, which already don't make sense so far.

Even if they rule this an accident the seed is already planted.

Who's really behind it we may never know. 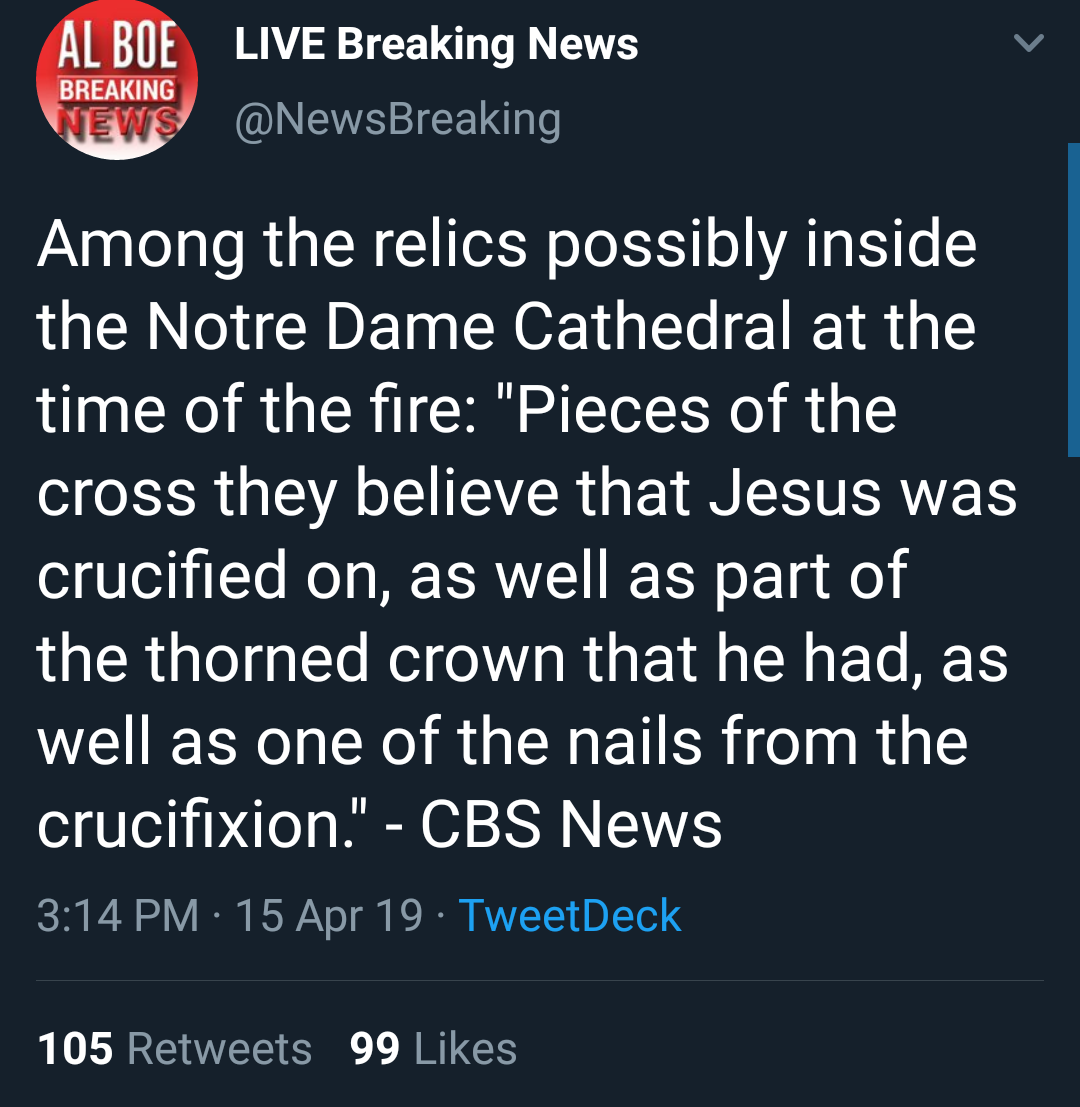 A shot across the bow of Christianity.

It reminds of the end of I Pet Goat where the large Cathedral in the background crumbles as the anti-Christ figure comes to life. With all that has gone on in France with burning churches, it sort of fits.

They saved many artifacts including the partial crown.

I was wondering how they were gonna explain that one. There would have been no way to get all that stuff out if they did it when they saw the building was on fire. The only explanation is that they took all the artifacts and art out prior to today.

Is it wrong that I do not believe the official story of any major event that happens these days?

Because everything they've ever told us our whole lives is lies?

This is/was a holy war.

Burning that down the week of Easter?

I hope people don't give in to violence because that's exactly what they want.

I want to clarify again that I am no longer in the Marine Corps. I’m a veteran. ICE Special Agent (HSI-SRT).

For the record. I’d estimate that 80% of us KNOW that we were pawns for the gov. A running sick joke is “GOD” - Gold Oil Drugs.
Removing terrorists/protecting local pops/fighting terrorism over “there” instead of HERE was the majority reasons for enlisting.


Trump in later remarks to a crowd in Minnesota called the cathedral "one of the great treasures of the world."

"I will tell you the fire that they’re having at the Notre Dame cathedral is something like few people have witnessed," he said.

"It might be greater than almost any museum in the world. And it’s burning very badly. It looks like it’s burning to the ground," he added, noting that the structure was being renovated.

"They think it was caused by renovation," he said. "And I hope that’s the reason."


"Flying water tankers"? Watch the Water. Some reference to 9/11?

Wouldn't you? Renovations are going to lower your security because of all the workmen who are going to be going in and out and they're going to make your building vulnerable to the elements and other things. That one isn't suspicious to me at all.

posted on Apr, 15 2019 @ 02:54 PM
link
Obviously a set up. The Deep State plan is for Mosques to burn in retaliation and all of barbaric Islam to be insulted, resulting in a world wide general uprising of snackbars who will burn churches and kill non-muslims. [This wouldn't go well for them in places like the US, which has about half of the privately owned firearms in the world and several generations of trained veterans. We boomers are especially irritable and short tempered.]

This is to precipitate a religious war and take up all news cycles. The deep state will think that they have escaped justice and will end up somewhere where they can try to rise again much like Nazis after WW2.

If this does happen, I expect that there will be specific casualties hidden in the noise. Maybe the Rothschilds and Payseurs will suddenly find themselves in a Muslim no-go zone with little protection. Alaweed will be in the diaper-and-fanbelt full rig and be found in a church by the militant branch of Opus Dei with 5 gallons of gas and a book of matches.

Time to put more MAGA in some MAGAzines.

Of course this will be deemed an accident with a BS back story like the Flight 800 shootdown or pinned on the yellow vests to justify persecution.
edit on 4/15/2019 by pteridine because: clarification