originally posted by: ucanthandlethetruth
So one asks themselves:
1. Why would someone be on a conspiracy site if they don’t believe data?


What data? You have not provided any (at least not about the item we are talking about)

Seriously? Are you actually going with there is no data in any of these Q threads? None? Chuckles.
Triggered!

2. Why would someone continue to ask for proof of a “win” when the best win of all to take down a deep state would be to NOT have an impeached President?

Because that isn't proof of what you are claiming.

Right, after 2 years of hearing “Mueller Time” and Q “Trust the Plan” with the obvious feints around whom to really trust because disinformation was necessary means nothing to your stressed brain.

3. Why would someone be on a conspiracy site but not hopeful for a possibility of a deep blow to the DS? (Because from my view, the DS wants Trump gone and he’s not leaving any time soon) i.e. Why would Mueller pass some impeachable offense on to Barr/Rosenstein or Congress to decide? If there was anything that damning, do you really think he’d have remained in power this long for Mueller to punt crimes to SDNY or some other area to delay it further? Would he want us to continue to look like complete putzes to our enemies and allies on the world stage?

Because they are such conspiracy theorists that they can't be conned by the trump train.

4. Why would someone frequent a conspiracy site and NOT be happy about more people learning more things about what’s going on in the world? Do you really stand on disputing 100% of the sources and information contained within 16+ threads?

Yes, I do, because I have seen how much BS there has been in these 16+ threads. When the naysayers speak up people hide behind " we are just speculating". I can roll with that but you went further and said you had Q wins. Where are they?[ /quote]

Maybe, erm, Trump didn’t collude with Russia? Do you need bold font?
Gosh, I had heard he did ... from all the mainstream media.

Your motives are clear. I wouldn’t even engage and waste space if I didn’t think some of this was good for the lurkers on the fence.

Let's cut the BS. Digital media costs next to nothing. We are not expending precious resources here. The energy spent here is much less than a good hug and a pat on the back. We, who have a heart, can hand them out without the slightest drain.

originally posted by: ucanthandlethetruth
Seriously? Are you actually going with there is no data in any of these Q threads? None? Chuckles.
Triggered!


Nothing Q has dropped could not have been found on the open web. Chuckle all you want but it is the truth.


Right, after 2 years of hearing “Mueller Time” and Q “Trust the Plan” with the obvious feints around whom to really trust because disinformation was necessary means nothing to your stressed brain.


It means DC is playing games. My tin foil hat doesn't allow those waves in. It keeps my brain from being stressed.


I think you need to go to bed. Not being an A-hole but that didn't make any sense.

Trump didn’t collude with Russia. Do you need bold font? Gosh, I had heard he did


Some people were hoping for that. I don't think the collusion thing proves anything one way or the other.

Say that to Dashen, or any one of many spending time doing research about what is haooening in this country and the world. Tell them the energy spent on working and hoping for change is somehow worse than your spitting on it and telling yourself you somehow know the truth. Funny.

Dashen isn't paying the ATS electrical bill. I'm spending time here as well. Is it worth something to you?

I'm going to guess it is since you have also chosen to spend your time with me. Thank you.


originally posted by: ucanthandlethetruth
Sure triggered you.


No, not really. I'm just shooting shiz with you on ATS.

Q never seemed concerned about Mueller, did he?


Mueller (at least his full last name) shows up in 203 of Q's drops, so there was some concern.

If that still went over your head, no one can help you.
Just yourself.
Feels unlikely.


Why don't you just drop all those Q wins you think you have?

originally posted by: wanderingconfusion Some things about #TheGreatAwakening worth noting in a recap.

1. half and infinity constantly under attack. All for a larp?
2. We find out that JL and his wife are into pedo and cults. Who knew? SICK!
3. Mostly silence from Obama, HRC, Podesta. Why are they not defending themselves?
4. Obama and HRC are looking for new sponsors or cover?
5. Bill Gates is on a depopulation mission with his vaccines.
6. Eric Schmidt is tied to the Mayo Clinic.
7. SA was controlling the US by funneling money thru HRC CF.
8. All the vile villains were rounded up in SA and strings cut.
9. SA with a new leader is changing for the better. Freedom for women, seeks peace with Israel etc.
10. Pedo's are being rounded up right and left. Yay!
11. Elysium has been disabled.
12. CIA via Elon Musk and SpaceX was providing nukes to NK. Strings cut.
13. CNN, MSNBC etc. are desperately trying to hold onto ratings by throwing anything they can at President Trump.
14. All the women who accused POTUS have been debunked and ties to Soros has been exposed.
15. Antifa is on it's last leg since strings have been cut there.
16. There has been an increase of FF's to try and change the narrative.
17. Many attempts have been made on Potus' life.
[...]


Circling back WC laid out many subjects that have been brought to light months ago. For you there is no win, no matter what, you will not see anything as a win. This has been proven time and time again. I trust the plan. I see the plan unfolding everyday just a little bit more. I see WIN every damn day while those on MSM project that I should be in fear. 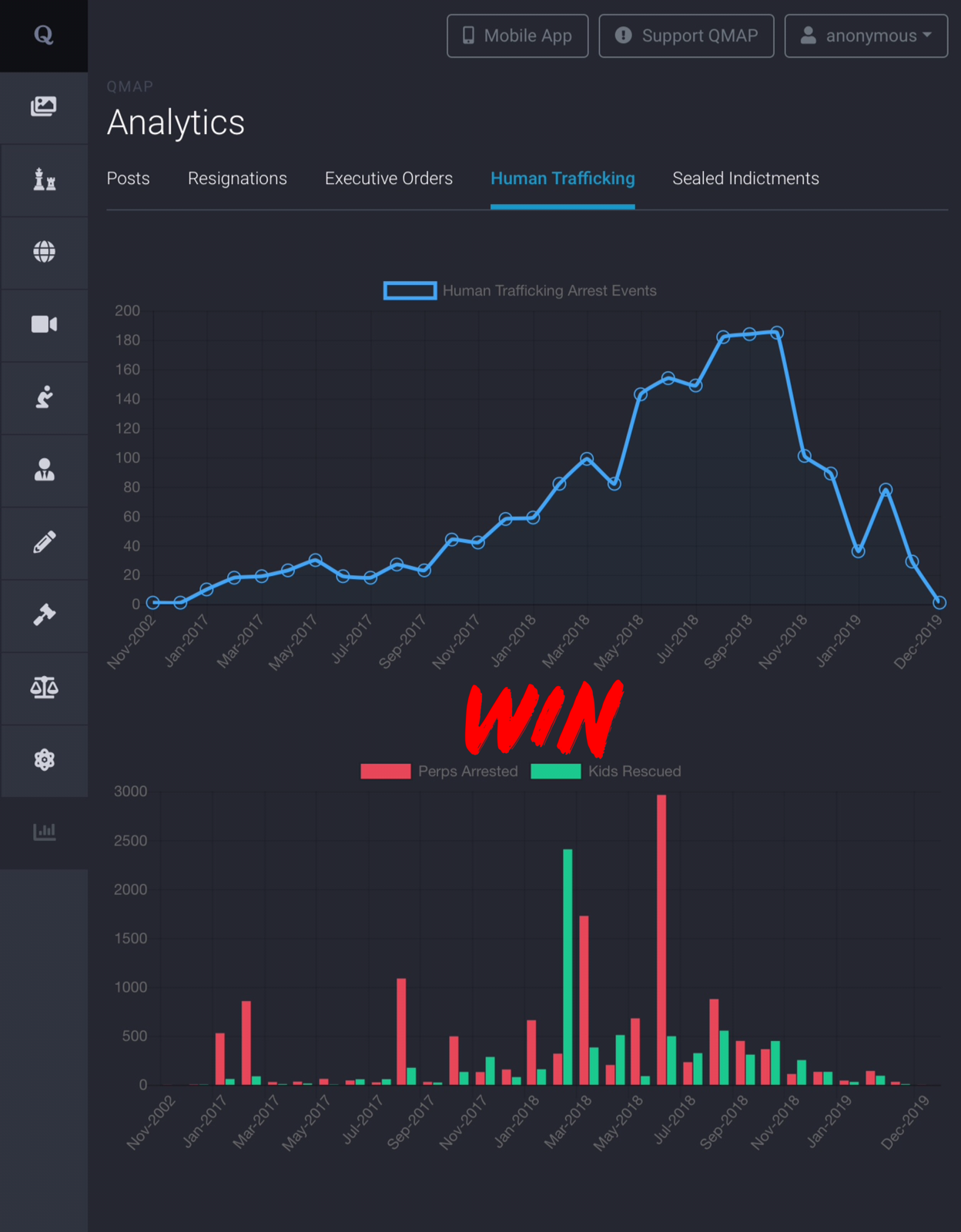 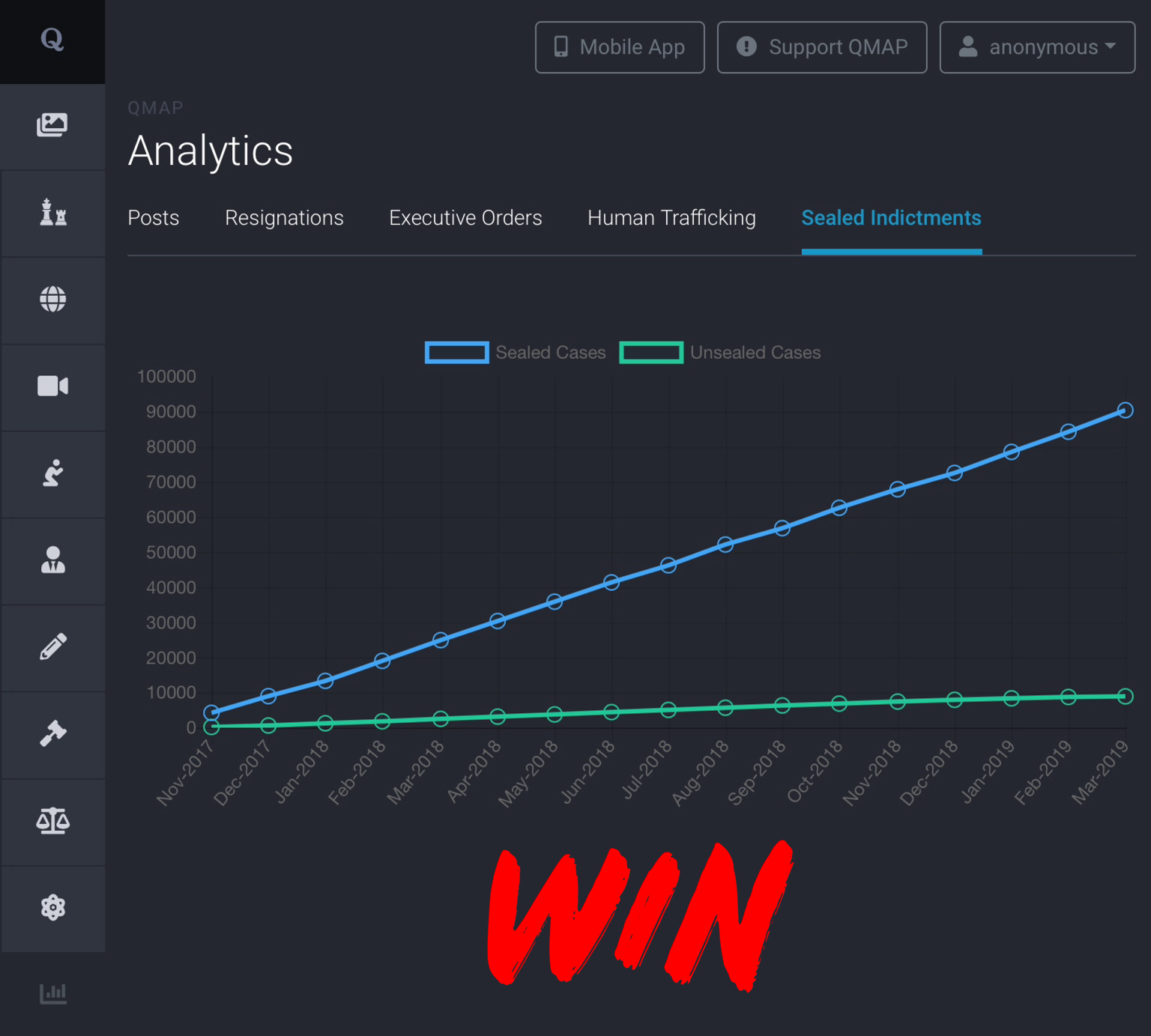 Either Q predicted/caused something or they didn't?

Nobody asked you if you trusted the plan or not. That wasn't the question.

Who cares if he won or not. That wasn't the question either.

As for your other post, humans are still being used as currency or did everyone all of a sudden stop having to go to work?

daskakik, re our discussion about [spill+30] from Q Post #2861 and my interpretation of spill = over run...

I've found a couple of interesting cross references in other Q Posts:

This next one highlights that additional meanings may exist within biblical quotes Q posts! I've added in brackets alternative interpretations:
#69


Anonymous ID: GVUvg1M7 No.147819733 📁
Nov 3 2017 16:56:13 (EST)
God speed to those who will be put in harms way. You are the bravest men and women on earth.
We will never forget.
All share one title in common and that is the title of "Hero."
"The LORD is my shepherd, I lack nothing. He makes me lie down in green pastures, he leads me beside quiet waters (xref calm water pics, eg. in NK), he refreshes my soul. He guides me along the right paths for his name’s sake. Even though I walk through the darkest valley, I will fear no evil, for you are with me; your rod (Rosenstein) and your (White House) staff, they comfort me. You prepare a table (Qmap) before me in the presence of my enemies. You anoint my head with oil; my cup overflows ([spill+30]). Surely your goodness and love will follow me all the days of my life, and I will dwell in the house of the LORD forever."

Drops under 100? I don't think those were even authored by the people now posing as Q.

I actually think Q meant "spill the beans", in other words, a repeat of "when does a bird sing".

UK Police opened fire on a car that rammed the UK ambassador's car multiple times as it was leaving the Ukraine embassy in London.

Police opened fire on the car to stop it but the driver ignored the gun fire and continued ramming...

Some kind of False Flag? Relevant to Ukraine involvement in deep state?

Interesting... can we call "Spill the beans" the Jack & The Beanstalk theory?

Re first hundred posts; I think the different styles pre/post #100 are deliberate because the highest counts of CAPS only simple gematria totals refer back to posts under 100. I therefore think that, from Oct 28 2017 to 31st Dec 2017, Q was laying out the table of base data, which the 2018/2019 then cross reference/built upon. Basically 2017 posts were the foundations.

Please do NOT link to R.A.T.S. threada

Jack and the beanstalk? Just goes to show how repetitive we are with words.

I think the first hundred drops was another group just trolling. I guess if you trust the plan and think there was more to it you will see more to it. 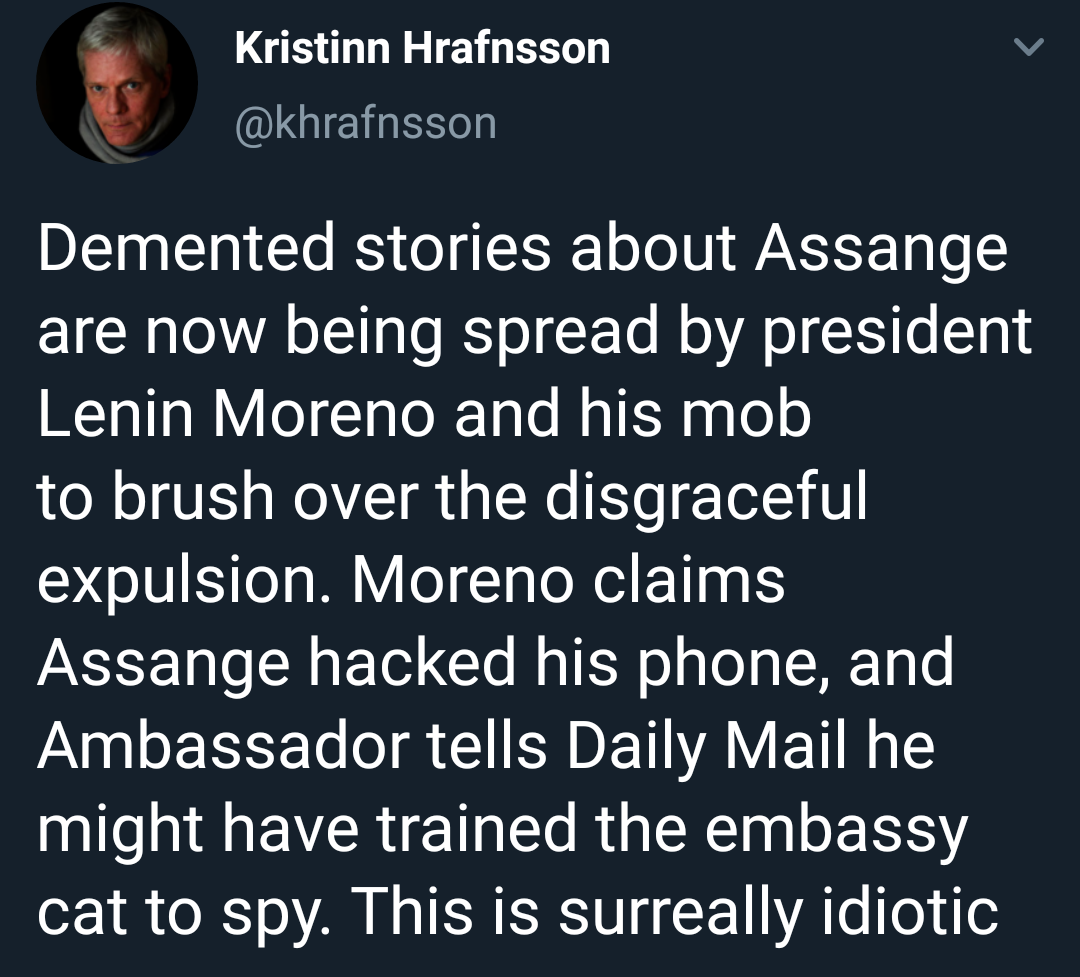 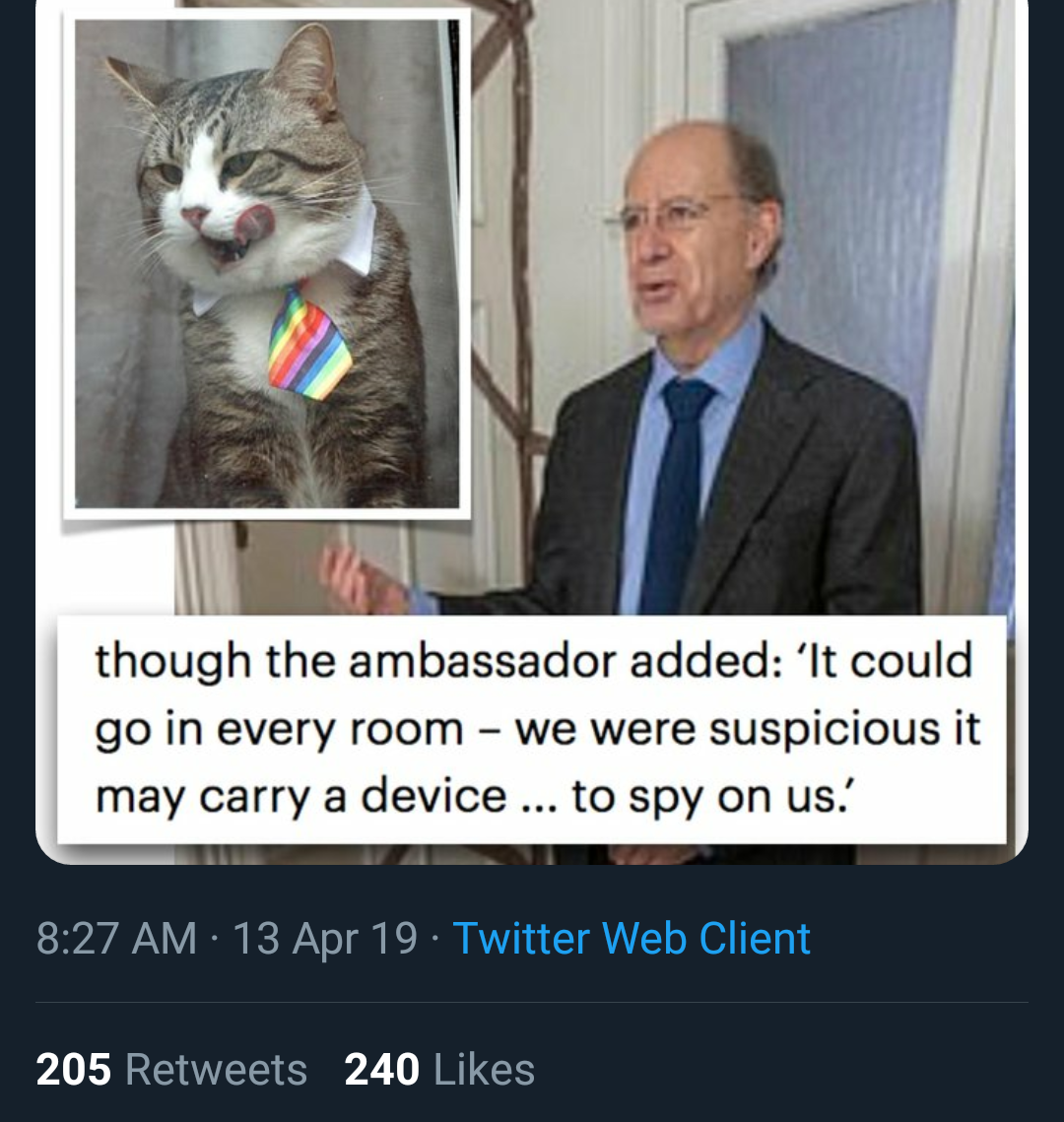 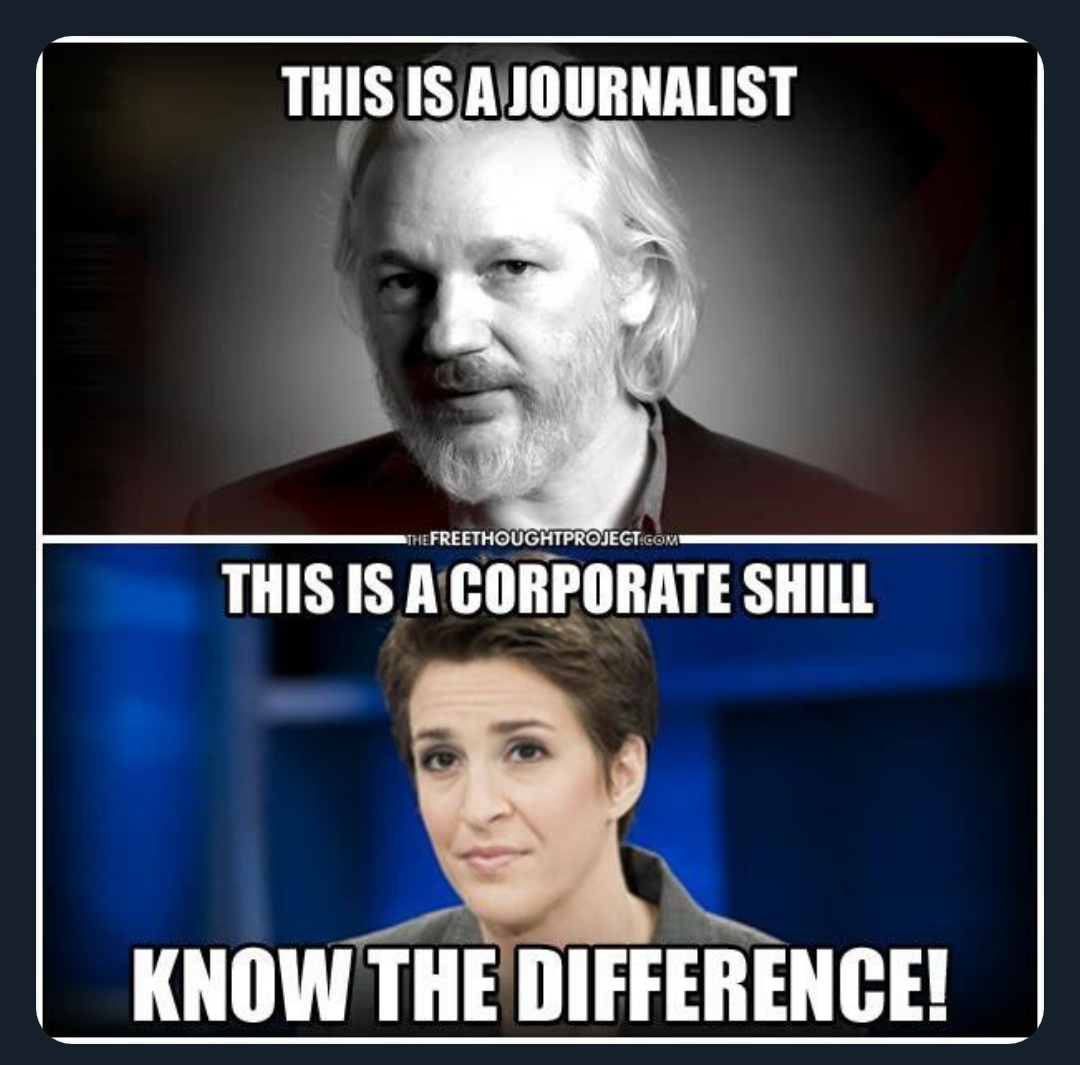 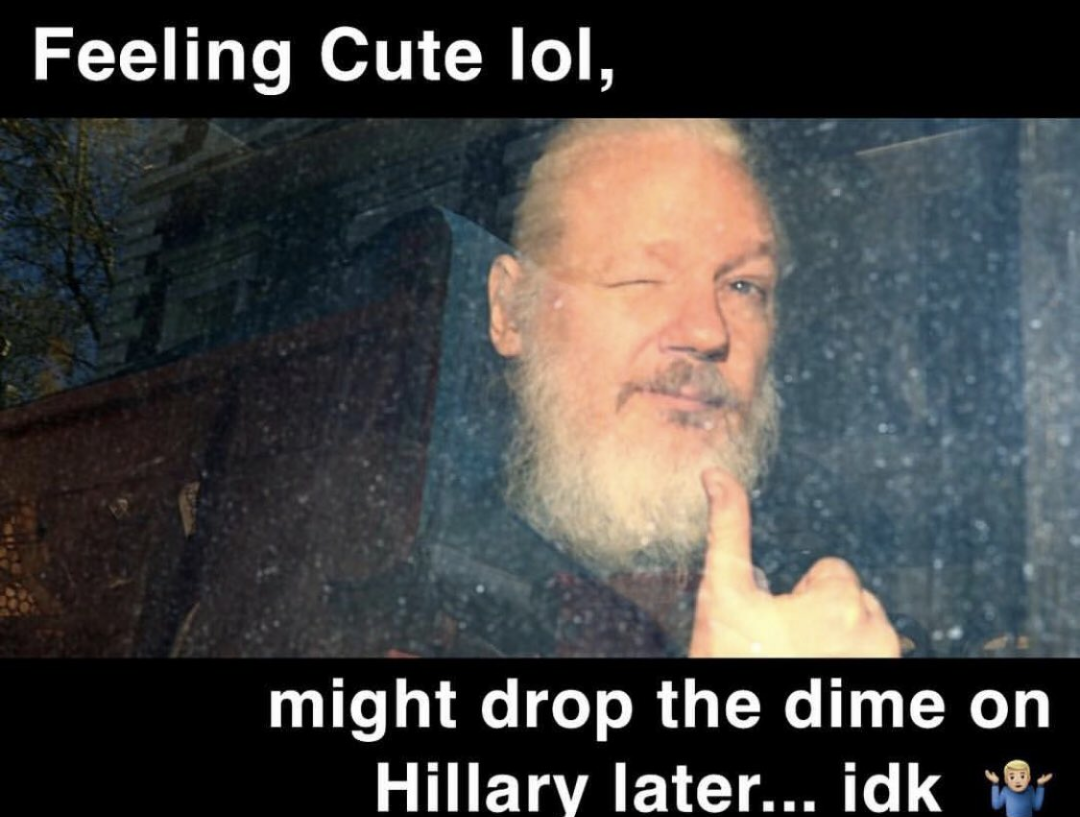 ...hence the extradition warrant saying he tried to hack US systems?


It is not illegal for him to do so.

Otherwise all of the NSA, CIA etc etc personnel who routinely try and hack Russia, China and, Oh, the phone calls from European Heads of State would have to stand trial in a foreign country. They don't.

JA is not subject to US Law!

Good points P358. Hard to really tell what the facts are here re: his "citizenship." Is he still an Aussie citizen - truly? Is he Ecuadorian? Is he both? Or during the down time did he become and American in some secret form? This is all "officially" speaking of course.

He could have testified via Skype at any point, but the prevailing wind might suggest it is less about his word then about what he can access. If he was truly cutoff, and was in the embassy, then accessing might be the issue.

There is always the possibility that he is the red herring. 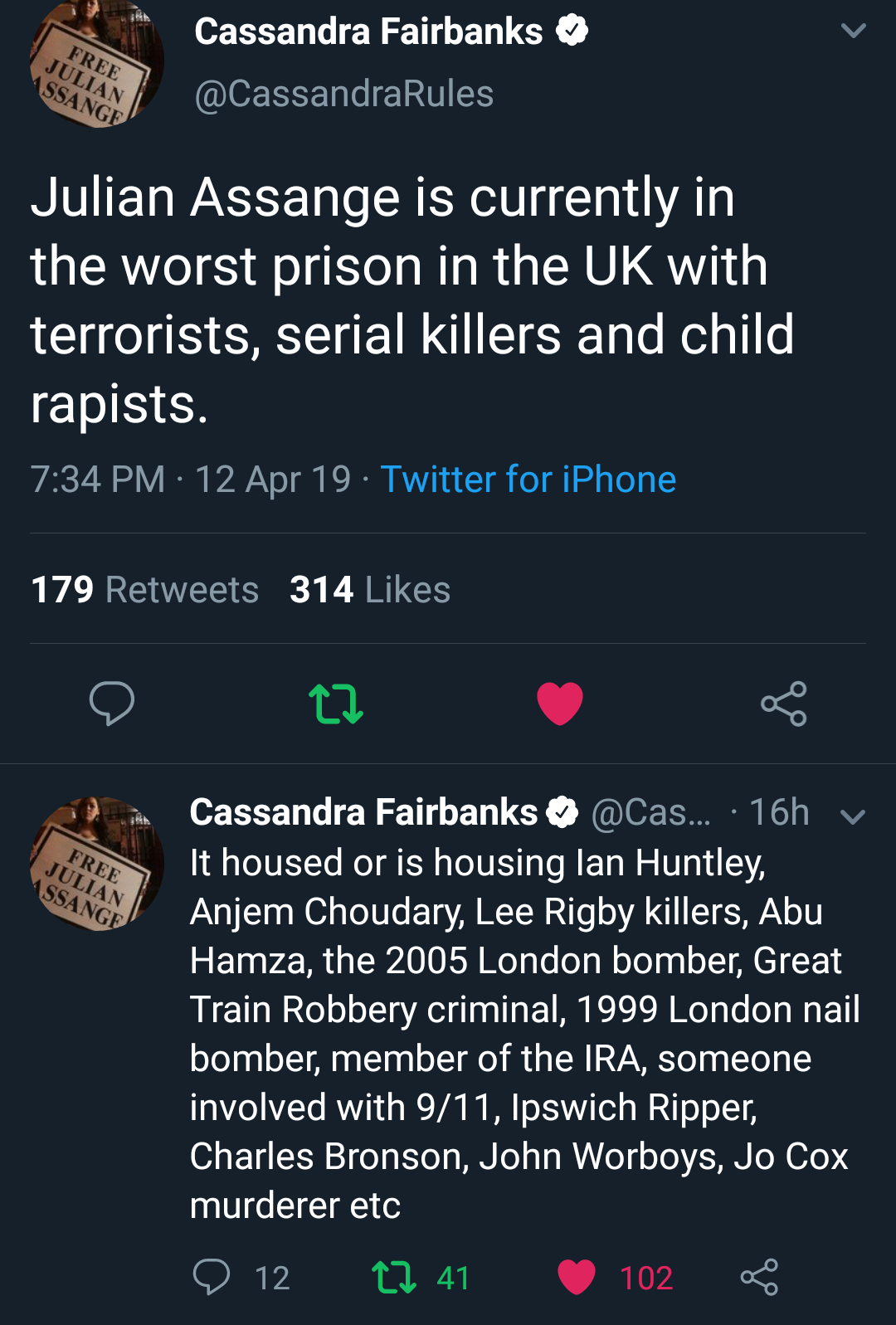 Someone posted earlier about "if he gets out alive".

This would be why.


I think they are going to try to erase all Wikileaks has published next.

Archive 'em if you've got 'em.