Here's What the Speed of Light Looks Like in Slow Motion

Amazingly, 100 billion frames per second is only a fraction of what the CalTech camera is capable of capturing. Known as T-CUP, the camera was first described in an October 2018 paper in the journal Light: Science and Applications and is reportedly capable of photographing light at 10 trillion frames per second. The researchers developed T-CUP for the express purpose of filming ultrashort laser pulses in incredible detail — in other words, to capture the speed of light. 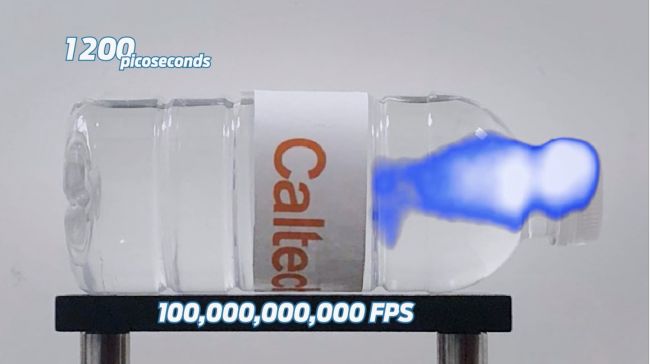 Here's What the Speed of Light Looks Like in Slow Motion

posted on Mar, 31 2019 @ 10:29 AM
link
The speed of light is constant in a vacuum. However, through a medium like water, you can actually slow it down. It's awesome that they instead sped up the observation process enough so this kind of photon propagation in a liquid medium happens at a speed we can make sense of.

The level of interdisciplinary cooperation for this level of technology is pretty intense.

posted on Mar, 31 2019 @ 10:46 AM
link
When you're on a ship traveling at the speed of light, I bet the stars barely move? They certainly don't zoom past like in Star Trek. Too much distance between them.


I think that might rank up there with one of the coolest things I've ever witnessed...ever!

It's ingenious how they do it. They use a camera to take a long exposure photo that captures the entire motion of the light in one picture.

At the same time they take a video of the light.

posted on Mar, 31 2019 @ 12:54 PM
link
What they neglect to explain is that it is not the camera that is fast but instead that the laser has a very fast switching time. This is not the first time that this has been done. Here is a video from 2011 with better imagery and a better explanation.

Nope. This is a completely new process, this is not a stitch of multiple samples, this is one sample.

I knew of that old method too, which is still pretty awesome.
edit on 31-3-2019 by OccamsRazor04 because: (no reason given)

originally posted by: carewemust
When you're on a ship traveling at the speed of light, I bet the stars barely move? They certainly don't zoom past like in Star Trek. Too much distance between them.

I dont think those are actually stars but interstellar debris or other things.

How would that even work? Debris does not light up.

I believe it would look like the entire Universe was awash in a glow of light. You would not be able to see stars at all.

Cameras are gonna be able to pick up the gaps in the frames of reality soon if this keeps up.

Look up at my explanation. The actual frames per second are the same as a top quality video recorder.

When you're on a ship traveling at the speed of light, I bet the stars barely move? They certainly don't zoom past like in Star Trek.


Warp drive enables spacecraft to far exceed the speed of light. Everybody knows that.


In the episode The 37s from the Star Trek: Voyager series Warp 9.9 is directly mentioned in a dialog with 4 billion miles per second (6.5 billion km per second), which is about 21,468 times faster than the speed of light.

Old version of Windows, though. LOL.

originally posted by: carewemust
When you're on a ship traveling at the speed of light, I bet the stars barely move? They certainly don't zoom past like in Star Trek. Too much distance between them.

You forgot to take time in to account. You would see something very similar to star trek because for you time would slow down. An object moving at the speed of light no time will pass even if it travels millions of light years. To our photon no time has passed at all.

like wearing night vision goggles in an extremely bright room!

I was thinking about this. Are you sure that's how they do it? Because I think it's a little different than that.

I think they take a series of long (relatively speaking) exposure photographs from a computerized camera which can trigger the start of a second (and third, etc) photo before the end of the exposure of the first. They wind up with a series of overlapped images.

Then, like you say, they also video the event.

Each photo would ultimately show the exact same thing in the end state, but the time reference is different for each one. They know the duration of the pulse, so they can calculate how long it would appear at that frame rate. Then they use the computer to go back and re-render the images hundreds of millions of times to render out the elements of the exposure after the pulse had passed.

ETA - If I'm not mistaken I thought I heard them say in the video they had to return the "next day" to see the processed images, that it took that long to process. (Just imagine how much time it took to calibrate that thing the first time!!!)

Positive. They are looking at how light refracts, and it will happen a little different every time, so multiple exposures are useless. They had to find a way to get footage of just one event.

Do you have a source for this?