This is not the Starr report

posted on Mar, 28 2019 @ 12:11 PM
link
Besides the glaringly obvious fact that Ken Starr was an Independent Council vs. Mueller as a Special Council I want to point out a huge flaw in the Dem's latest talking point.

Just to point out, I thought what happened to President Clinton was despicable and overall a major gift to Dems.

The whole banana MSM is discredited beyond straight jackets now 😎

The difference is Clinton was impeached despite the Senate failing to punish. But Hillary was there for both occasions. So what do think would have happen had she won? First President to be impeached and removed perhaps? 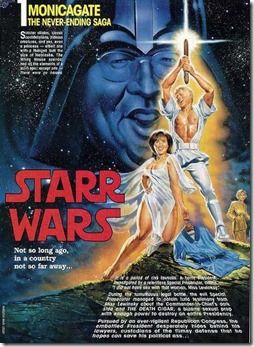 posted on Mar, 29 2019 @ 12:48 AM
link
There is a very important part of this that makes it laughable.
After the Starr report, a Democrat controlled AG passed that changed the process for Special Council reports to prevent full disclosure.

The regulations now governing Mueller were meant to restore the traditions of the Department of Justice, which were broken when Congress enacted the special-prosecutor (or, later, independent-counsel) provisions of the Ethics in Government Act of 1978. Under that regime, reports became the warp and woof of the independent counsel’s work. Most provocatively, the statute required an independent counsel to refer matters to the House of Representatives for possible impeachment when a surprisingly low threshold of evidence was in hand—“substantial and credible information that an impeachable offense may have been committed.” I followed that requirement when I produced the so-called Starr Report, which then took on a controversial life of its own in the House in the dramatic months of 1998. The architects of the current regulations saw all this unfold. Not surprisingly, the drafters of the new regime—the one under which Mueller operates—set themselves firmly against the revolutionary principle of factually rich prosecutorial reports. It might seem strange for me to say, but they were right to do so. The message emanating from the new regulations, issued by then–Attorney General Janet Reno, was this: Special counsel, do your job, and then inform the attorney general—in confidence—of the reasons underlying your decisions to prosecute and your determinations not to seek a prosecution (“declinations”).

Seems to me like Democrats are eating their own hat on this one.