Morning Joe thinks if you call them out for lying about Collusion, you're a bad person

Now what Joe and Mika lack in journalistic integrity, they more than make up for in in faux self righteousness.

Instead of apologizing for being wrong about Russian collusion, or heck even mentioning they were wrong, they have a bold new argument.

Now, no matter if you were on the left or the right; if you criticized the media pushing this collusion lie, you're a bad person.

They're not going to listen to you, because you are probably a misogynist Trump boot licker who pushed Seth Rich conspiracies (I'm paraphrasing but they actually make this argument).

Watch how Joe mocks you while saying they had to push the collusion lie cause Trump is bad, and how you are terrible if you have a problem with how he or the media pushed this lie. Watch how Mika arrogantly sneers at you for daring to question you.

Watch how all of them fake laugh and pretend Joe is funny.

Again, its not just that the media is so bad in pushing this fake story that cause so much division and helped Obama admin officials attempt basically a coup. Its their indignant attitude to having peons like me and you question the behavior of them in pushing this lie.

Its a long one, but enjoy!

They are straight up certifiably insane.

posted on Mar, 26 2019 @ 06:27 PM
link
"I kept telling all those Democrats that had collusion evidence to give it all to Mueller. Why didn't they listen to me?"

Morning Joe thinks if you call them out for lying about Collusion, you're a bad person


No one ever told me I was a good person...
My motto "make the payback Hell"

What has the world come too?

They lie, when you say, "You lied", they take umbrage over the fact that you don't approve of their lies.

Journalism is now opinion pieces, it's sad to see.

Opinion pieces-from both left and right cheerleaders, should be relegated to the late night shift. News comes first, the biggest problem with the MSM is they don't call it as they see it, but the way they think they see it.

In my timezone we have a saying "keep the bastards honest" and that applies to politicians as much as these so called journalists.

Trump is in the clear, done. There could be an Ebola outbreak in Eritrea (yes that is a real nation) but the real issue is that Trump or Clinton farted in an elevator thirty years ago.

I think ATS should have it's own national broadcast, but It has become a laughing stock of late I'm sad to report.
edit on 26-3-2019 by Thecakeisalie because: (no reason given)

Hear me out. Bernie and Trump bother weren't supposed to make it as far as they did. They took care of Bernie and underestimated Trump. It was the first time we should have had two anti-establishments make it to the general election.

What if this whole thing is to get people back aligned with the parties and vote for whatever robot they pick?

Before 2016 there were more independents than each individual party.

Either way, we've all known on this site the MSM is garbage propaganda. We're beating a dead horse, and while we bitch that some are biased (the left about talk radio and fox, the right about the rest) we focus on the biased while they report essentially the same thing in regards to foreign policy and several other key factors.

Food for thought.
edit on 26-3-2019 by CriticalStinker because: (no reason given)

originally posted by: Djarums
This is the same program that told the world that it is the media's job to control what people think, right?

At least they for honest enough to say that was their motive.

History tells us that's been their motive for centuries now.

First it was the religious leaders who were close with the leaders until people became literate, then they took the printing presses... So on and so forth.

Here we are with the dawn of the internet, and that's just a matter of time until they take that. We can already see them trying.

But we're one step behind focusing on cable networks while we should be fighting tooth and nail for our freedom on the internet.

MSNBC 'Its Our Job To Control What People Think'

Now, why anyone still watches these 2 muppets is beyond me, unless you're watching for comedic value or propaganda pointers..... 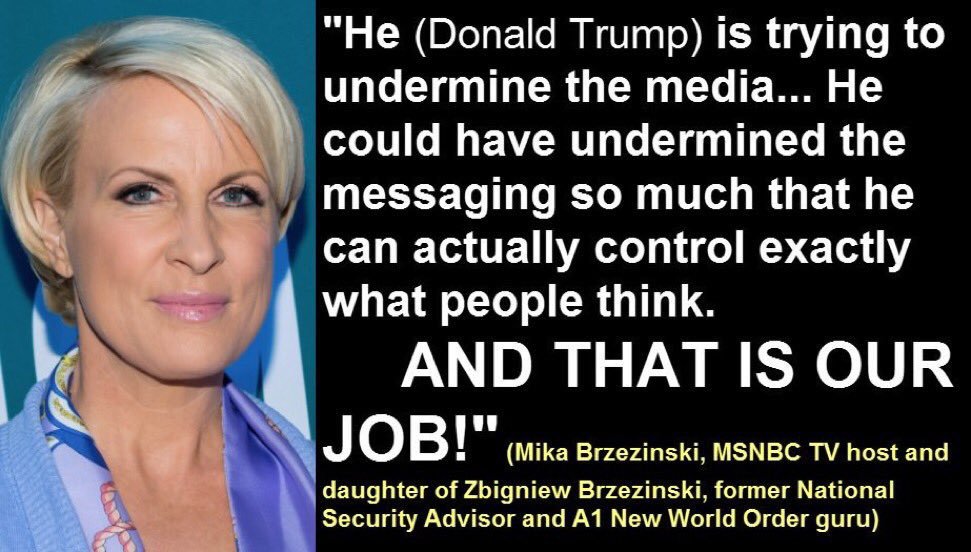 Mika can apply suction to my left testicle.

She's the one who thinks it's the media's job to tell us what to think; definitely her father's daughter. The rotten apple did not far from the tree.

originally posted by: Sublimecraft
a reply to: Grambler

Now, why anyone still watches these 2 muppets is beyond me, unless you're watching for comedic value or propaganda pointers.....

posted on Mar, 26 2019 @ 07:22 PM
link
They were all gleefully hoping for a US president to be found guilty of high crimes and misdemeanors, colluding with a foreign government to steal an election so he could be thrown out of office. They bet it ALL on Mueller and team delivering it in his report.

It's all out there in their relentless coverage of the president. 92% negative coverage!

Who are the real "bad people" here?

I'm not sure how many actually, actively watch. Its gotta be a small number, right? Actual viewership numbers on these things are a bit tricky.

I've come to the conclusion that very, very few watch shows like this. However (!), they serve as the dough in the propaganda pizza. At first glance, it might not even appear to be there, but chew into it a bit, and you'll see the despotic gluten.

From what I've seen, the stuff people DO interact with seems to take their cue from shows with this tone though. So, on the surface it is patently absurd.. but its driving an engine that will spit it all back out in the best bite size chunks for a given audience.

This video got my first copyright dispute and removal by youtube.

Apparently, the fine folks at NBC think me taking a 6 minute clip and criticizing it for near an hour violates fair use.

Of course they dont want anyone actually seeing how terrible their show is.


But we're one step behind focusing on cable networks while we should be fighting tooth and nail for our freedom on the internet.

That's right. Let's take down GOOGLE. Boycott your computer!!! That little Android guy gives me the creeps. What can I do to help you?
edit on 26-3-2019 by olaru12 because: (no reason given)

This video got my first copyright dispute and removal by youtube.

Apparently, the fine folks at NBC think me taking a 6 minute clip and criticizing it for near an hour violates fair use.

Of course they dont want anyone actually seeing how terrible their show is.


We are under surveillance !! 😱