Beto O'Rourke: America May Not See 244th Year If Mueller Report Not Released

“This is an unprecedented attack on this country and on our democracy, and we are owed the facts. And if we do not receive them, 243 years in, there’s nothing that guarantees us a 244th.”

The fact is, Betoman, the Democrats planned the unprecedented attack on this country, by conspiring a coup against President Trump, before he took office and continuing afterwards. The Mueller Investigation was a witch hunt that was a complete waste of taxpayer money. In the end, Mueller, who led the investigation, found no evidence of collusion against Trump. He stated that there would be no more indictments, yet Schiff for brains and many Dims like him, insisted there was "cold, hard evidence" and that it's "in plain sight." Now, the Democrats are shell shocked and demand that the full report be released, or they will subpoena Mueller and Barr, if needed, to push for full disclosure. It should be noted that Trump has no problem with full disclosure. Why? Because he's innocent.

When the Mueller report is fully released and proves there was no collusion between Trump and the Russians, then what? Will the Dims throw their guy, Mueller under the bus and blame him? Someone actually stated that it now "feels like the seeds of a cover-up" because Mueller let the president “off the hook.”

Are you freakin' kidding me? For 2 years, MSM and the Democrats have called Trump a traitor, insisting that Trump was guilty of collusion. Schiff for brains, Eric Swalwell, Maxine Waters, including CNN's Jeff Zucker, all promoted the collusion conspiracy theory throughout the entire Mueller investigation. All the while, Trump remained stoic and confident, telling the media all along that he was "an innocent man," and calling Mueller's probe illegal.

What O'Rourke and other Democratic candidates don't realize, is how foolish their progressive ideas look in the eyes of the working class in this country. The Democrats surely realize, that their chances in 2020 are now a long shot, especially when the Russian Collusion Investigation has produced a big nothingburger. Democratic candidates, like O'Rourke, should realize that Americans are starting to realize that the United States may not see the 244th year, if one of these Bozos get elected president. 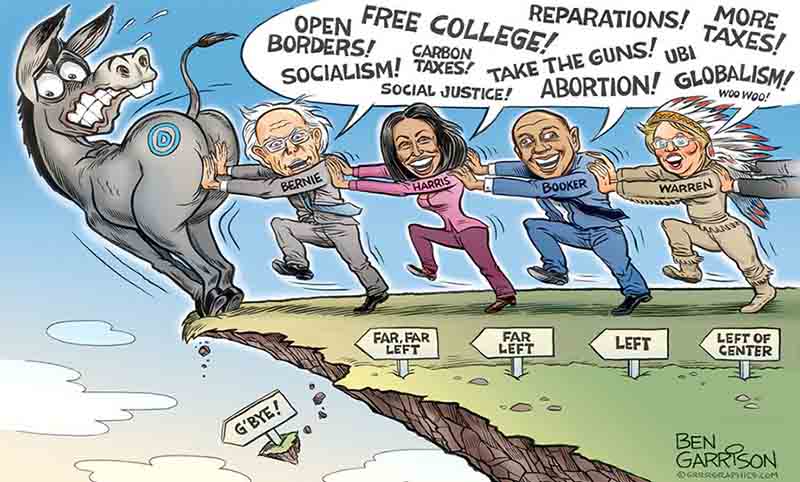 I have a stutter.

But with all the obesety in this country Coprolites should be consumed. I have a few in the yard next to the asparagus garden but I guess the lite fertilizer was too stale, the asparagus all died.

The longer this investigation dragged on, the more the FBI's/DOJ's criminal conduct was revealed. Mueller had to bail out, before things got even worse.

I predict the Dems will scream about a cover-up, while trying to sweep the real criminal conduct under the rug.

Wow, you had to say it three times, that must be some serious Sheet you are discussing.

This is the second time a Democrat has overtly threatened the nation.

This is the second time a Democrat has overtly threatened the nation.

I think lately Democrats overtly threaten the nation every time they get together and pass a bill...

mugger
+2 more
posted on Mar, 23 2019 @ 11:00 PM
link
Um, what democracy is he talking about? We're a Constitutional Republic. I've noticed most of the liberals have trying to push that agenda since trying to get rid of the Electoral College.

Some conservative outlets have suggested that the Democrats will try NOT to release the report so that the MSM can make false claims from unnamed sources / leaks to do more damage.

originally posted by: mugger
Um, what democracy is he talking about? We're a Constitutional Republic. I've noticed most of the liberals have trying to push that agenda since trying to get rid of the Electoral College.

They don't teach that in schools, anymore.

Are you trying to tell us something

Aren’t there some amazing health benefits
Havnt people been eating up these politicians crap for centuries, can’t see that changing

He must be good friends with Swalwell.

Okay. I officially change my mind. F them. Keep the entire report classified. If this is the left's guy, then they are begging for another civil war.

You would think the Dems would want that thing thrown into the trashcan where no one would see how corrupt their side is. How the hell does Beto think he’s going to stop the government after 243 years of it carrying on just fine without him?

I have already heard that it was going to be released, so why is this even a talking point that he needs to make? Unless he’s just trying to look tough for his side. With all do respect, does anyone fear the wrath of beto? What could he possibly do? Is he really threatening the end of the US if he can’t reveal the ineptitude and corruption of his own party?

Meanwhile, Obama and Hillary are both screaming at the TV “Shut up Beto”!!!
edit on 23-3-2019 by Woodcarver because: (no reason given)


Aren’t there some amazing health benefits