North Korea has started rebuilding the facilities it uses to launch satellites into orbit and test engines and other technologies for its intercontinental ballistic missile program, according to American military analysts and South Korean intelligence officials.

The revelation comes days after the breakdown of the second summit meeting between the North’s leader, Kim Jong-un, and President Trump last week in Hanoi, Vietnam.

With North Korea now ramping back up ballistic missile tests the US finds itself played by the dictatorial regime. North Korea has received several boons as a result of the Kim-Trump summits but with this new information the only tangible benefit the US received is now no more.

As a result of the summit's China loosened up sanction enforcement on North Korea. Additionally, Trump cancelled the joint military exercises between the US and South Korea. And, to top it all off Trump defended Kim when questioned about the treatment of American citizen Otto Warmbier.

The argument may be able to be made that Trump is capable of understanding an economy but he is not capable of geopolitical diplomacy. America deserves better.

I thought they never dismantled anything. What to believe?

At any rate, those who love war and death will view this as welcome news.

posted on Mar, 5 2019 @ 09:37 PM
link
Good for them. Why is that only China, France, Russia, United Kingdom, and the United States should have nuclear weapons? If anyone has em, all should have em.

NK must have the best engineers in the world to be able to start re-building within days.

In the real world you would not be able to tell for weeks.

Before long he is going to be shooting off missiles again.

I wonder what really happened at that summit that made them both walk away?

Maybe kim is a lot madder about it all then we are being told?

Anathros
+26 more
posted on Mar, 5 2019 @ 09:42 PM
link
I love how you peace-loving Democrats became the party of Warhawks the moment President Trump began working towards peace on the Korean Peninsula.

Unnamed sources from NY Times again. Plus a website that looks at N Korea aerial photography.. verified for this rag.

You do have a good point there.
You see that is why from Mexico to down to South America, not one country has nukes and never will. America will over throw their govt. system.
As far as North Korea goes, Kim already said he would use nukes against America.
That was his death certificate.
North Korea will never go nuke unless we have a traitor in the White House and President Trump is not one.
There's play in all business deals even the Mob knows that and that is what the US President is dealing with in North Korea. As he said, he is in no rush to get into the nuke disarmament since the US already told Kim "NO NUKES" if you want to remain in power. Those words were a wake up call for Kim.
You can bet that if Kim goes the route that paper said, well... Once we see military movement here in Asia, then the real news will shine and that won't be with a WEAK American President as with Trump.
Zap man here of the forum will know more about the military movement in Asia. But I don't live too far from Iwakuni so I can hear the US planes .

What most people are unaware of is that of course the nukes, its the freak'n missiles with chems pointed at all US bases in Korea and possible Okinawa and Japan. Now that is scary and that is why I believe, that is part 3 of the negotiations. Kim already knows, no NUKES. The spiderweb of the trap is the "chemical weapons".
Trump and his military advisors know what they are doing, if not, Trump would have fired the Generals already.

Does anyone still buy this crap? We get it, the media hates the President. If the NYT wants an educated audience to believe this nonsense, they would use official NAMED military sources or The White House perhaps.

And I wont call you Surely

You don't think that maybe this is why this summit failed?

Not that I disagree with what is being seen.

My source tends to back up what is being said in that article. I just don't agree with your characterization of the president and his handling of the North Korean nuclear problem. Certainly the South Koreans would disagree as there has been a lot of progress made between the two Koreas in recent months.

posted on Mar, 5 2019 @ 10:05 PM
link
If I've said it once, I've said it a thousand times --- NK will never disarm. They'll manipulate the hell out of the diplomatic attempts & gain what they want/need, then revert.

I have my theories on what any tangible gain(s) could be, but at face value, it seems they're feigning diplomacy to buy time & likely for program rebuilding.
And I gotta admit, doing it on a world stage in front of the press? Impressive amount of salt in the wound there. Being played as a fool and publicly humiliated as one is as embarrassing as it gets for top level diplomacy.

originally posted by: Anathros
I love how you peace-loving Democrats became the party of Warhawks the moment President Trump began working towards peace on the Korean Peninsula.

Trump was over there, not the Dems.
If Kim launches missiles again, how is that their fault?

As long as Kim Jong-Un isn't firing missiles over his neighbors, he's contained. They just have to let him know that if he starts shooting rockets again, he and his sister will be removed from power. (RIP) 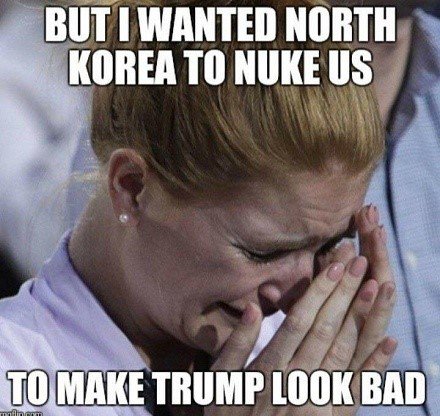 Can't wait to read all the excuses and see trumps base flip flops over why Trump gave a full on dictator the credit he didn't deserve and a spot in the limelight, the picture of Kim and Trump will go down in history as one of the dumbest moves by a sitting American president. 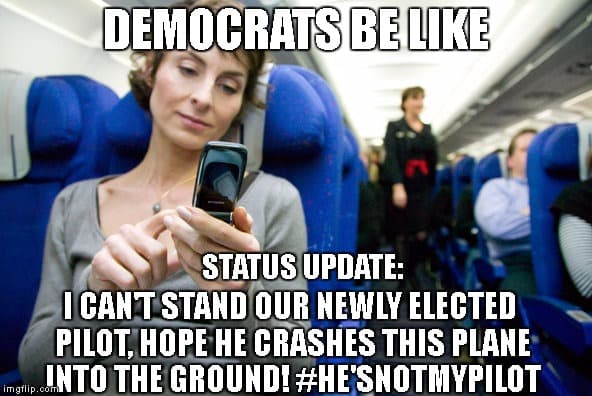 You'll burn your own house down because orange man bad.

At the end of the day, you're just mentally unwell and a symptom of what is wrong with our society now.

Keep posting though, as an example of what an American shouldn't be.

That's silly and a whole bunch of hyperbolic nonsense, cmon man why go there nobody wants to get nuked..