posted on Feb, 27 2019 @ 10:51 AM
link
So, i'm going to post this here. I know it's about a game company, but like seemingly everything these days' they've gotten wrapped up in the bull# politics of today.

On Tuesday morning, THQ Nordic's Twitter account announced and linked to the AMA, saying, "We're doing an 8chan AMA and we have no idea why." The session had been announced nearly a day prior on 8chan's "/v/" sub-board by its own moderators, but it was THQ Nordic's official announcement that garnered wider attention—and drew responses about the site's reputation for either outright hosting child pornography or skating on the edge of state, federal, and international laws on the matter.

Within three hours of the AMA's launch, THQ Nordic's Twitter account had changed its tune and directly called out 8chan's reputation for illegal and despicable content. As written by PR and Marketing Director Philipp Brock:

I personally agreed to this AMA without doing my proper due diligence to understand the history and the controversy of the site. I do not condone child pornography, white supremacy, or racism in any shape or form. I am terribly sorry for the short-sightedness of my (!) decision and promise to be far more vigorous in my assessment of these activities in the future. This was not about being edgy, this blew up and I very much regret to have done it in the first place.

Before posting that apology, Brock tried explaining away his use of 8chan in a Twitter post: "the opportunity was here and we took it, we got apporached [sic] in a very friendly and polite manner and were assured, said person (shoutout to Mark) will take care of the nasty stuff. so, here we are." The apology that followed appeared to acknowledge what many Twitter respondents pointed out: that the "nasty stuff" was inherent in the site's reputation. 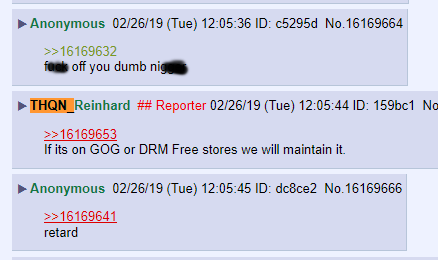 A snippet of the AMA just in case anyone is unaware of what 8Chan's like.

So i've been kind of following this since I read about it. Honestly, whoever came up with that great idea really should have known better. I guess people have been pretty unimpressed calling them Nazis, homophobes and racists.

Personally, I think they just made a stupid decision but I don't buy their we didn't know any better bull#. The casual way they ignore the porn,(I didn't use that screenshot), and the racist comments and continue kind of speaks for itself.

Wow whoever came up with the idea to do an ask me anything on Cripple Chan must have been on some pretty heavy stuff dude.

4chan and 8chan are just collections of the worst parts of human nature, to think you could have a productive conversation with those community’s is very naive.

Everyone doesn’t have to talk and think just like you.

A good meaning social fascist is still a fascist.

Yeah...you're right, but it's more...what did they really think was going to happen if they did that?

The new Darksiders sucked. Hopefully they do right by Timesplitters.

posted on Feb, 27 2019 @ 12:39 PM
link
They get a pass in my book. Unintentional mistake that should have had further scrutiny for sure.... but no harm no foul just keep making some of my favorites.