posted on Feb, 27 2019 @ 09:09 AM
link
One of my distant relatives got herself into a bit of a predicament whilst on her way to the market. An animal rescue group tried unsuccessfully to free her from the tight situation, but fortunately some nice firefighters took time to help her out and she was able to get back to her routine. If this had happened in Seattle and not Germany, I'm pretty sure she would have been shot in the head with a pellet gun and cremated rather than being released unharmed. It's not often that rats are treated with respect and they have a bad reputation that in my opinion is not deserved. Considering the millions of rats and mice that give their lives to science every year, perhaps we should treat these intelligent small mammals with more regard. 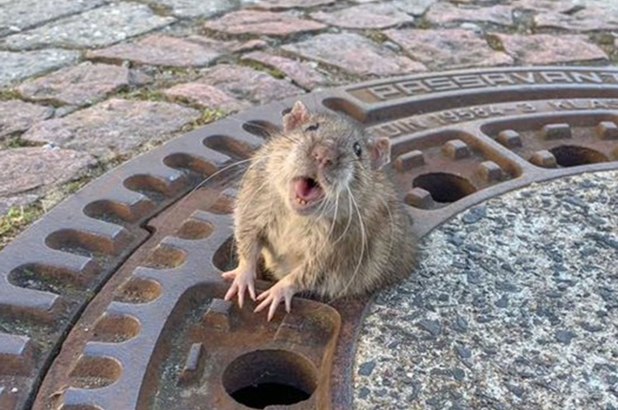 A rotund rodent with a whole lotta “winter flab” had to be rescued by an entire team of firefighters after she became stuck in a sewer grate. The chubby little lady was found stuck in the manhole on Sunday in the German town of Bensheim, sparking a large-scale rescue operation. Despite their best efforts, animal rescue operation Berufstierrettung Rhein Neckar were unable to dislodge the fat rat and called in volunteer firefighters for reinforcement. 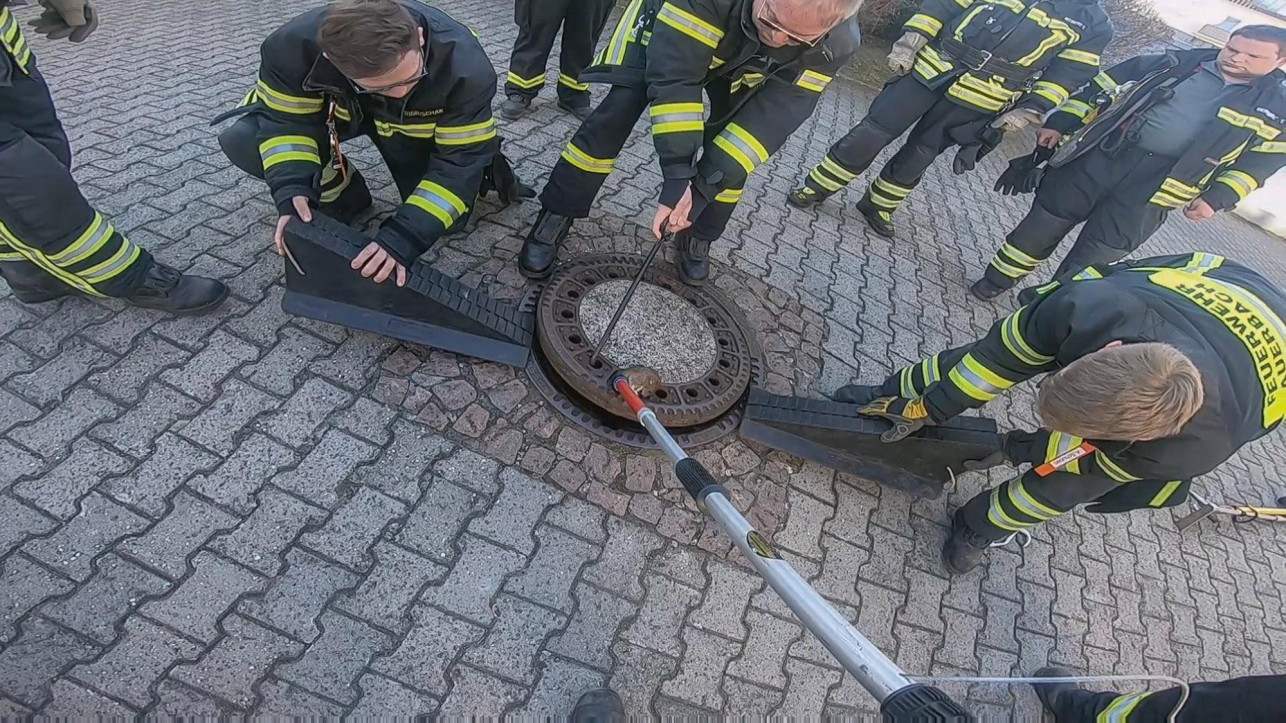 “She had a lot of winter flab and was stuck fast at her hip — there was no going forward or back,” animal rescuer Michael Sehr told local media, BBC News reported. Dramatic footage from the rescue shows no less than seven German firefighters lifting the manhole before lassoing the pest and setting her free into Bensheim’s sewerage underbelly. New Yorkers will no doubt wonder why anyone would go to so much trouble to save a rodent. But Sehr insisted animals of all pedigree — even disease-infested New York straphangers — deserve to be held with esteem. “Even animals that are hated by many deserve respect,” he said.

posted on Feb, 27 2019 @ 09:16 AM
link
Some might see the fire bridgade saving it as a waste of taxpayers money, which is fair enough I suppose, but I can't move past thinking that this photo is the perfect opportunity for a caption competition,


I'm conflicted by the story , on one hand it's vermin and in any other situation would be exterminated but on the other it's an animal in need of help , can't leave it to suffer.

On balance I think they did the right thing.

People not learn anything from the Black Death? 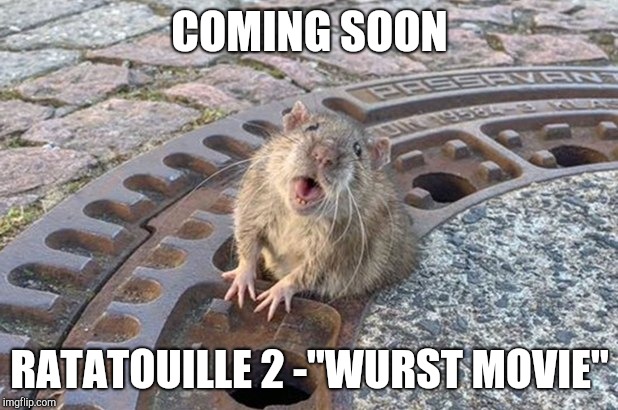 The chubby little lady was found stuck in the manhole on Sunday in the German town of Bensheim, sparking a large-scale rescue operation.

originally posted by: neo96
They should have burned it.

People not learn anything from the Black Death? 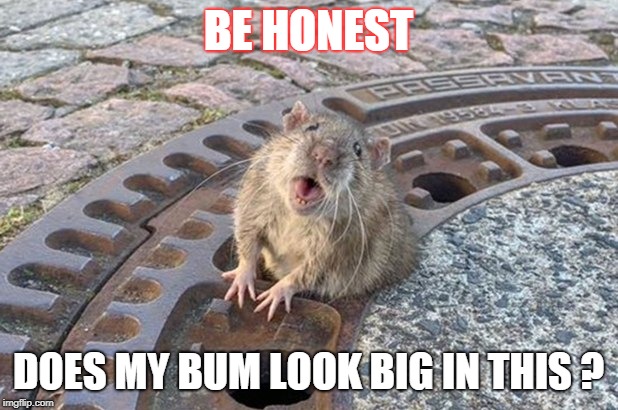 That's great that you were able to provide a short list of disease that rats CAN transmit. Maybe check out a list of infectious diseases that HUMANS can carry. You'll find that you are probably more likely to become ill having come into contact with another human.

I did not state that rats do not carry Plague- if you read carefully what I wrote I stated that the PRIMARY source of infections for the historic Black Death epidemic was transmission by fleas and lice moving from human to human. If anything should be learned from the Black Death is that personal grooming habits, sanitation, and overall cleanliness are important factors in reducing transmission of communicable disease.
edit on 2272019 by seattlerat because: (no reason given)

posted on Feb, 27 2019 @ 10:56 AM
link
It’s amazing the compassion humans can have for little critters, but it’s ironic in this case as I’m sure buildings all around this area are littered with rat traps.

Rats are the best pets I have ever owned, hands down, period!
They dont bite, they aren't mean, they can learn the same amount of tricks as a dog, they are very loving animals.

My rat, butters, best rat I ever owned, would literally be sitting at the door by 5:30pm for when I got home at 6 pm, and jump up on my leg as soon as I got home. He would also hop into bed for a few hrs at night and snuggle up on my pillow.

He got a bath every week, and was a better companion than any dog I ever owned, he lived 2.5 years....and I miss him every day. The videos I could show you of this guy, what an incredibly special guy he was.

To what extent are they capable of being potty trained?

after the gym, he is still there. so i step a little closer to inspect, and the poor guy looked up at me. scared me like crazy, cause i have seen rats leap. not at me, but i have seen them jump 3 feet in the air.

but again, i felt bad, he must have been hit by a car, and made it to the sidewalk by the building. it was terrible, there was nothing i could do, but at least the guy could look around at the end, if it was the end.

it was after 10pm, so he had at least one night before nyc woke up.

giant rats are so spooky, i wish we could communicate with animals like rats, mice, cockroaches, spiders, etc. tell them, 'hey do not come into the area because you might get hurt or worse.'

i saw a skunk last night, and i do what i always do when i see animals walking too close to streets. i pulled over, honked the horn and yelled at him to 'get out of here!'

i do not yell at him out of anger, i try to scare him a little so he runs away from the street.

i do it to deer too, who are grazing too close to highways upstate.

Funny you should ask, he was actually potty trained! I do have pics of him on the toilet bowl, pooping!
I swear I didnt train him to do that.
I only trained him not to go potty upstairs except in his room.
We had 3 rats, and gave them their own small room to live in, the other 2 rats mainly stayed in the room unless we brought them downstairs to hang out every night.
Butters had free reign of the whole house, he would go up and down the stairs. After eating dinner with us he would immediately go upstairs to potty and take a nap in his drawer.
Dang, making me tear up remembering all my memories, I can post some pics if you want, I know a lot of people will think I'm crazy lol.
I highly recommend rats as a first pet for kids, people breed rats to sell as pets, you always buy them 2 at a time and you want same sex, otherwise you have to separate them or you'll have lots more rats lol.

I made a small album, I can add more if you want!

Wow, never seen a potty trained rat! my bud had a cat that used the toilet..didn't figure out how to flush though

Sorry for your loss.