Q-Anon Unmasked Today? Is This The True Face Of #QAnon?

posted on Feb, 26 2019 @ 10:52 AM
link
First of all, I'm no expert on Q-Anon and his posts. Personally, I've always believed it was a bunch of BS and the whole thing never really interested me. I know there's an ATS member who regularly posts extremely long threads on "Q" and I promise this thread won't be long.

I was checking out another conspiracy site today and read a thread concerning Q-Anon. The thread was about information written in an article that was published two days ago, as well as from the information presented on a live streaming video, that ended @17 hours ago (see below). If this is true, it turns out "Q" is a former senior national security official, who was asked to help cook one night for a State dinner. His name? Michael Anton, former Deputy Assistant to the President for Strategic Communications. The article mentions that HighIQAnon was the party responsible for drawing up this conclusion, based on these "perceived" facts.

one particular Anon will post a string of very interesting ideas, which can all be tracked via their ID, and another Anon will compile all their posts into a “bun.” Which is exactly what Anon did late last night/early this morning with another Anon’s posts… an Anon who had quite the theory to share, who was subsequently dubbed “#HighIQAnon:”

Essentially, in this series of linked posts, HighIQAnon lays out his theory that Michael Anton is actually #QAnon. For those unfamiliar, Anton is the former Deputy Assistant to the President for Strategic Communications, and he served in that capacity until April, 2018… (So already we have a “fit” for the kind of role Q plays, in that Anton was in charge of Strategic Communication… just months before QAnon appeared on the scene).

Firstly, I didn’t come up with this theory. It was already on the boards, so every bad actor in the world already read it hours ago. Secondly, we’re not even sure if this is true, yet. And Thirdly, if HighIQAnon is right, there have been enough public hints along these lines that none of this is really “secret” any more. Now, personally, I find HighIQAnon’s line of thinking really compelling, which is why I presented it to everyone here, today, but I’m more than happy to be wrong about all of it.

The Long Article That's Linked Above Points Out Some Key Facts To Support This Conclusion: 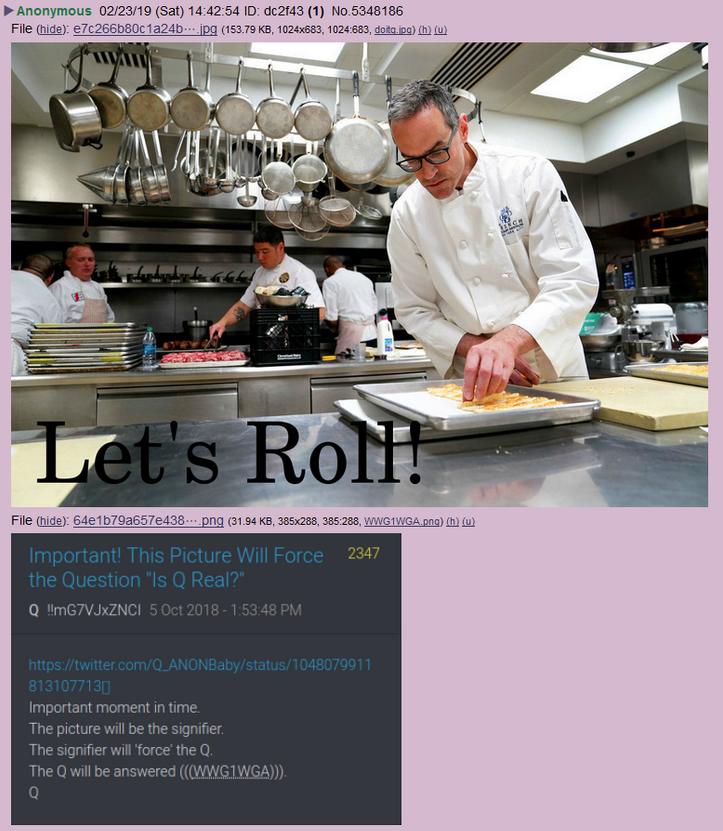 “I’m a rare thing in Washington conservative circles: a right-wing Francophile,” said Mr. Anton, who first served in the White House during the George W. Bush administration, when the Iraq war curdled relations with Paris. “It makes it a special honor that I didn’t merely cook at the state dinner, but of all people, I cooked for the president of France.”


"Q" References P-A-I-N Often, Which Is A Rough French Translation For Bread: 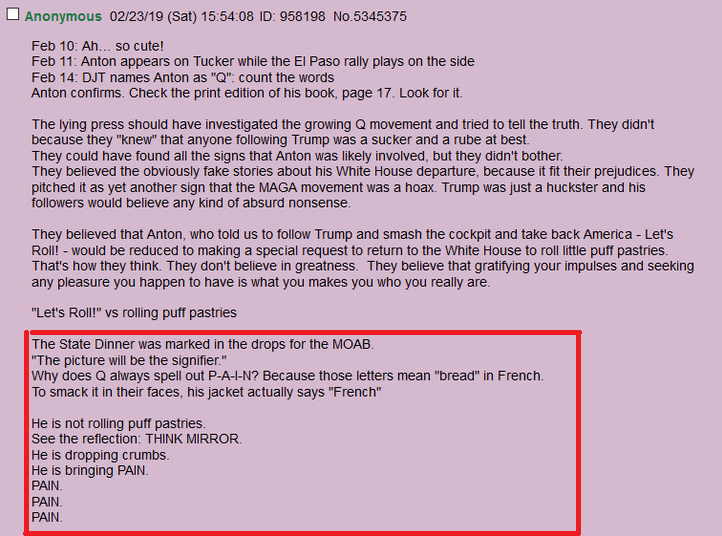 From An Article Published On March 2017:

The Populist Nationalist on Trump's National Security Council Michael Anton actively courts controversy with his extreme views. But how much influence does he have in the White House?

50 Minute Clip On The End of Conservatism and the Rebirth of Politics, Featuring Michael Anton:


YouTube Video Concerning This Topic That Was Streamed Live @17 Hours Ago:

Please continue your Q Anon discussion here
edit on 26-2-2019 by Ahabstar because: (no reason given)