Hate crime = Making something that's already been made illegal, illegal-er.

Where is PETA? Any statements? Kamala? Cory?


Where is PETA? PETA (People for Eating Tasty Animals) denounces this hoax as it prefers animals to be dead before they are cooked (except lobsters of course). Anything more is cruel and inhumane, which most (sane) people despise.

That other PETA, People for the Ethical Treatment of Animals, probably doesn't care. Obviously Cory and Kamala don't care: pets don't vote and so are irrelevant. Unless of course, they can be filmed dying in horror to drive up donations.

We truly live in a world of terrorism. There is no need to look to the Middle East any more for that.

wow, hadn't put that into perspective just yet, but I think you are right.

I get that, I just didn't want to turn the OP's thread into busting on Frodo's ugly sister so I typed out some non-sense diguised as a serious question.


Seriously though....that thing is fugly. It looks like Sloth and RBG had a love child.

posted on Feb, 26 2019 @ 09:46 AM
link
On the other hand, it’s good knowing we live in a world where people have to fake hate crimes to in order to justify their fake activism. Activists would be out of work if there was no fake hate.

Gonna get a bit philo-so-fickle on ya here...

I grew up in a rural area where animals outnumber people by probably a hundred to one. There are probably ten times more deer in a mile radius of me than people by a 10:1 margin. So obviously I grew up understanding critters. They can be dangerous... a rattlesnake can bite someone who didn't even know it was around before the rattle went off, and inject enough venom to kill a herd of elephants. A water moccasin will also kill with poison, and it will actually aggressively chase anyone around out of its territory. A black bear will rip someone to pieces for being too close to her cub. A deer will attack if it feels threatened, and they have very sharp hooves and bucks have those racks that can easily impale someone. A squirrel can inflict a nasty bite. A raccoon can whip three hound dogs if cornered. Heck, threaten its children and a damn rabbit will try and attack with those incisors.

Animals can be mean little devils when they want to.

But the meanest and most dangerous of all are the animals who walk on two legs. Unlike the rest, these two-legged animals called "humans" will deceive a person into being attacked. They will set up ambushes. They maim and kill for pleasure instead of out of self-protection or for food. And if there is green paper to be had, they will perform some of the most atrocious acts one can imagine. It's not about survival for them; it's about hate for all God's creation.

They tend to gather together in locations called "cities," apparently so they can be easier targets for each other. So I avoid cities. Everyone should.

He'll have a good time in prison... bloody xxxxxt!

whatever they put in the water is driving this country to rubbles.

In the words of Mark Dice, we should change the word troll to jussie.

And we're being jussied all the time, it seems.

Dont put that thing in my gender category. It will be interesting where they have to put it though.

originally posted by: shooterbrody
Wow
Burning your own pets alive to forward your political agenda?
Holy crap what a butthole!

what a sicko.. I was at first thinking, perhaps an accident he decided to blame on others, a cowards way through things.. but on reading more, just sick.

damn, some people... I don't care what political side of the fence someone is on, when they resort to things like this, it shows humanity is well and truly on the downward...

You forget, just how many on the left are too bereft of diligence to seek the facts.

What they are told IS truth. And they will come at you with their truth, despite the facts being revealed.

To be honest, this scares me more than the MSM constantly lying... :/

Its not the political fence here....its the gender fence. 🤣

originally posted by: lakenheath24
a reply to: gallop

Its not the political fence here....its the gender fence. 🤣

No one wants to sit on that!!

Those people are mentally unstable. Just like Juicy Smollett. Every time there's a "hate crime" against a queer, it's always a hoax they made up.

Why can't they just try to be normal. The fact that they don't see any of these hate crimes and realize people don't hate them like they've been told so they have to create their own hoax really says a lot about their instability. Sadly, nobody does a damn thing about it. 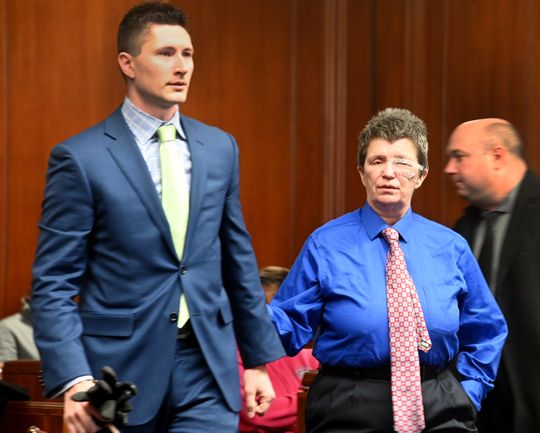 Here's the crazy thing... I grew up in the dead center of the middle of the Bible Belt. Now, I'm not going to say it never happened, but never once in my life did I hear someone saying they were "gonna go find some [insert derogatory term for gays here] to beat up." Not once. The ones who got beat up were usually the instigators of the conflict (too many times by trying to get someone who wasn't gay to be gay). That's just the way things were. I found out later that more than a couple of my childhood friends were gay and I never knew it, because they didn't start nothing. They were treated like anyone else.

What we have are a bunch of people who have a chip on their shoulder, and being gay is that chip. They're going around daring someone to knock it off, and when no one does, they just have to knock it off themselves. In the process, they're hurting a bunch of people whose only association with their like is the fact they're both gay. Whoopie-do-dah. There's more to a person than who they wanna have sex with.


The accused is the one on the right.

Thanks for the clarification. I was having troubles on that one

LOL, I was going to comment on that, BUT, is it a dude with tits? or a chick with moobs. Inquiring minds wanna know. And is that tie compensation for something missing? Hmmmmmmm.