A large cargo plane belonging to Atlas Air has crashed into Trinity Bay east of Houston in Texas, federal officials say. Three people were on board and a search and rescue operation is underway. The accident happened just before 12:45 p.m. CT on Saturday when Atlas Air Flight 3591, a Boeing 767, went down in Trinity Bay near Anahuac, a city in Chambers County. Three people are believed to have been on board. “The Federal Aviation Administration issued an Alert Notice on Atlas Air Flight 3591 after losing radar and radio contact with the Boeing 767 approximately 30 miles (48 kilometers) southeast of Houston George Bush Intercontinental Airport,” FAA spokesman Lynn Lunsford said. The plane was flying from Miami to Houston. The cause of Saturday’s accident was not immediately known. Both the FAA and the National Transportation Safety Board (NTSB) have launched an investigation.

Just noticed this pop up on Twitter. Still early days as to the fate of the crew or obviously what may have caused this? Anyone have any info on the company? Or their record?

Claim that the aircraft may have been linked to Amazon?


Live feed on this link seems to show it having gone down in the bay? Was showing a rescue helicopter with a (diver?) hovering above the water a second ago.

Beat me by a minute.

It was a Prime Air aircraft, with the Amazon logo on the tail. Under their agreement, Atlas operates the initial fleet for Amazon, until Amazon gets their own crews and aircraft up and going. It's something like a five year agreement with Atlas.

Atlas has been operating since 1992. They operate the Dreamlifter 747s for Boeing, as well as operating their aircraft for other cargo airlines, such as DHL, and Southern Air.

The flight was inbound to Houston, but was three miles outside the Chambers County Airport when it crashed.

Seems to have descended 6300+ feet within a minute or so? is this normal for an approach? 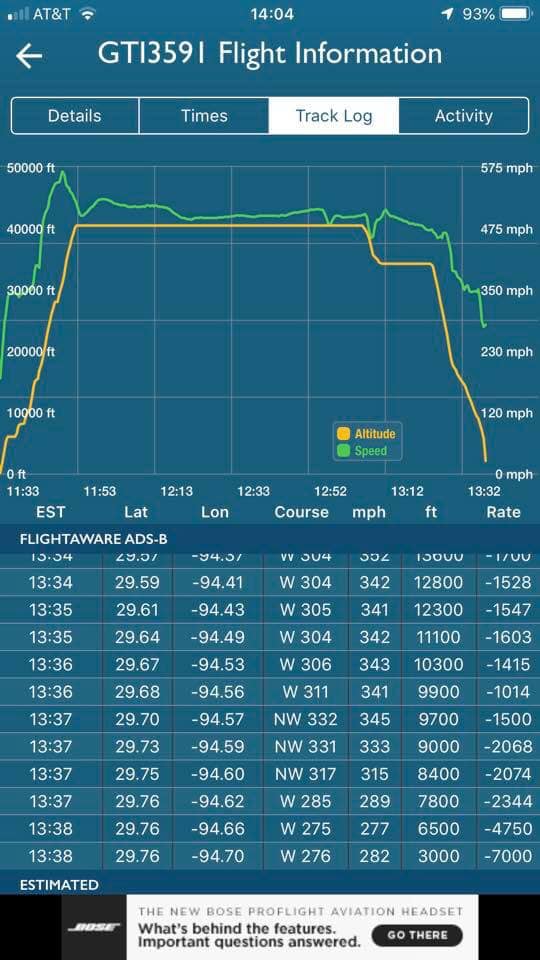 No, they basically went straight down.

posted on Feb, 23 2019 @ 03:01 PM
link
News source from the OP are claiming on Twitter that there was no distress call? So something very sudden and very violent?

originally posted by: Zaphod58
a reply to: solidshot

No, they basically went straight down.

What would cause a plane to just go straight down? Even if all engines are out, it can glide for a long distance. A wing coming off? I don't think really happens much. And there are 2 pilots for this type of craft right? That would rule out one of them having a medical issue.
edit on 23-2-2019 by CosmicAwakening because: (no reason given)

Yeah, whatever it was hit fast. They were probably getting the aircraft set for landing, so could have lost something during the checklist and got into trouble.
edit on 2/23/2019 by Zaphod58 because: (no reason given)

Fire, stall (although unlikely), hydraulic or another system failure, structural failure....
edit on 2/23/2019 by Zaphod58 because: (no reason given)

With a fire would they not have had time to get off a distress call though? Does this model of aircraft have any history of problems?

They could have had a fire that went undetected until it was too late, and it burned through the floor. That would sever the control cables, and put them out of control. They probably didn't radio a distress call because they were too busy trying to get back under control.
edit on 2/23/2019 by Zaphod58 because: (no reason given)

I was thinking an explosion, but not necessarily a bomb. Something in the cargo hold blew up?

Even if engines go out or some other mechanical failure, planes typically just dont fall out the sky nor do pilots not have time to get a distress call out.

It depends on what's going on. If they suddenly went out of control for whatever reason, they'd be concentrating on getting the aircraft under control, and not telling people on the ground they were in trouble.

I was thinking an explosion, but not necessarily a bomb. Something in the cargo hold blew up?

What could explode that would take a large 767 out the air other than a bomb? Even a fire from say lithium batteries or some other consumer good that might not t be stable wouldnt cause catastrophic and immediate failure.
edit on 23-2-2019 by Edumakated because: (no reason given)

I think an O2 tank once took a plane down.

O2 generator that cause a fire, if we are thinking of the same incident. Florida.