posted on Feb, 18 2019 @ 04:34 AM
link
So I forget where I heard this... oh, Owen Benjamin mentioned it on a short video I was watching with him discussing the NASA illusion. Now I'm no flat earther, I have looked at the planets and comets and other heavenly bodies through very power telescopes and it's obvious they are spherical. So to me that doesn't make any sense. However I did find this very interesting considering he was director of NASA's Marshall Space Flight center and an integral part of the moon missions. 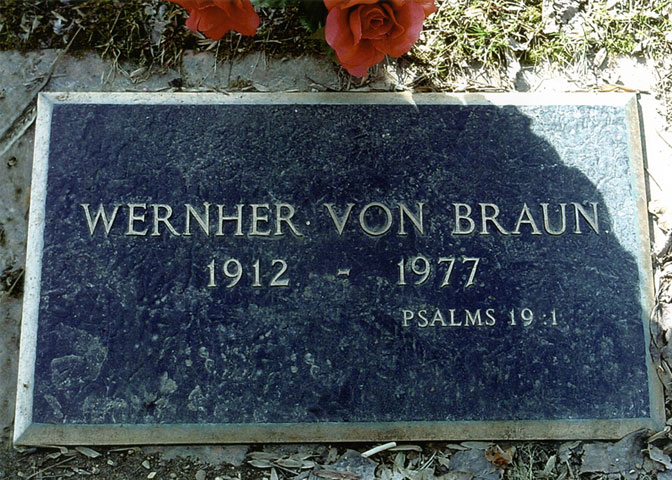 In 1960, President Eisenhower transferred his rocket development center at Redstone Arsenal from the Army to the newly established National Aeronautics and Space Administration (NASA). Its primary objective was to develop giant Saturn rockets. Accordingly, von Braun became director of NASA’s Marshall Space Flight Center and the chief architect of the Saturn V launch vehicle, the superbooster that would propel Americans to the Moon. At Marshall, the group continued work on the Redstone-Mercury, the rocket that sent the first American astronaut, Alan Shepard, on a suborbital flight on May 5, 1961. Shortly after Shepard’s successful flight, President John F. Kennedy challenged America to send a man to the Moon by the end of the decade. With the July 20, 1969 moon landing, the Apollo 11 mission fulfilled both Kennedy’s mission and Dr. Von Braun’s lifelong dream.


Psalm 19: To the chief Musician, A Psalm of David.

The heavens declare the glory of God; and the firmament sheweth his handywork.

And what is the firmament in a biblical context?

In biblical cosmology, the firmament is the structure above the atmosphere of Earth, conceived as a vast solid dome.[1]

Soooooo.... wtf? What's up with Werhner Von Braun leaving this bible passage on his tombstone? I know I know, coincidence.

not sure there is second one is there?

Soooooo.... wtf? What's up with Werhner Von Braun leaving this bible passage on his tombstone? I know I know, coincidence

Doubt it was coincidence as people don’t typically choose random verses for gravestones.

Doesn’t really seem all that strange that a guy who was pretty open about how the more space was explored the stronger his faith in god became. Doesn’t seem terribly likely that a guy who was designing and building things the ancient Hebrews couldn’t even conceive of somehow believed, as the ancient Hebrews did, that there was a big dome over earth with the sun, moon, and stars all stuck in place in the dome and the dome being held up by giant walls etc etc.
edit on 18-2-2019 by Shamrock6 because: (no reason given)

You really think the brain behind Saturn V and Apollo missions was referencing Gensis cosmology?

It cant both be not a coincidence and not a reference to the firmament at the same time. That just doesn't add up.
edit on 18-2-2019 by toysforadults because: (no reason given)

Did Werhner Von Braun not help take us to the Moon?

Kind of hard to do with a big crystal dome in the way.

There is no ""firmament"" around our Earth, that's just not how planets form nor operate.

Sure. But why did he choose this to inscribed on his tombstone?

Make sense of what people choose to have on their Tombstone eh?

What does "sheweth" mean first in relation to firmament?

The psalm is also used in the First Degree in the Blue Lodge.

Aye of the SS no less.

Don't ken if he was a Mason all the same, kind of apples and oranges.

Have another definition? Brains behind NASA mentions firmament... everyone else is an idiot bahahaha sure

Bury your head back in the sand or provide the etymology of the word with its various meanings I'll wait
edit on 18-2-2019 by toysforadults because: (no reason given)

Well I know a lot of Apollo astronauts were masons not sure about any Nazi connections though. I think they were into other things right

A lot of NASA everything has Masonic connections or so I'm lead to believe.

I think some of the founders were allegedly right into Aleister Crowley, Thelema, and the great work. But that's not strictly the domain of Freemasonry all the same.

I also don't put much weight behind Masonic bad guy theories either there's clearly a darker force intheworld oh
edit on 18-2-2019 by toysforadults because: (no reason given)

Interesting Von Braun worked with or for Disney as a pro space spokesperson..

No coincidence with this guy

I for sure believe Disney was involved in weird #

Not that I am aware of.