Oh, wait, there may not be another Democrat President...

Maybe Beto is thinking of running for President of Mexico.

That would explain his wall comments.


Or he may just be an idiot.

Not sure at this point.

Beto O’Rourke is in talks with Democratic strategists about a likely 2020 presidential run, according to two sources.

Two Democratic campaign strategists told POLITICO on Friday that they are in discussions with O’Rourke and his team. One of the strategists described those conversations as moving to “an operational level” after weeks of discussing 2020 in more theoretical terms.

A source close to O’Rourke said Friday that the former Texas congressman is still considering a run and has not yet made a final decision.

posted on Feb, 15 2019 @ 08:46 PM
link
Beto O’Rourke is quite very stupid.
Tearing down all the walls in America borders would result in a massive flow of migrants from all over South America not just Mexico.
edit on 15-2-2019 by AtlasHawk because: (no reason given)

The thing with that rally which Beto seemed very staged to me. It seemed like a very few people showed up or people he gathered he invited.

And yeah i noticed there are more Mexican flags then American flag. 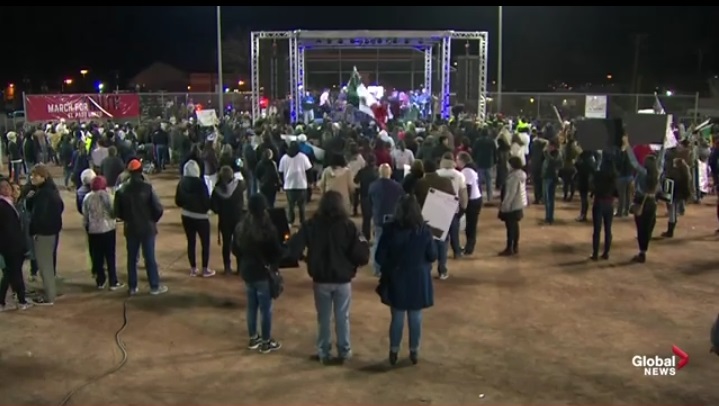 I don’t like Beto at all but I think I’ll take the police chief’s word on attendance before your picture.
God you guys are like a rabid dog frothing at the mouth and waiting for any chance to attack any and all those that are even slightly left.
Don’t get me wrong all but one dem candidates and hopefuls suck monkey ballz. But this rhetoric against them just plays into Trumps playbook. Please don’t be so blind and look past propaganda.

I can only take him at his word.


If we can't even do that, then why bother listening to them?


I'm not making excuses for anyone.

Just pointing out the way I see things.

God you guys are like a rabid dog frothing at the mouth and waiting for any chance to attack any and all those that are even slightly left.
Don’t get me wrong all but one dem candidates and hopefuls suck monkey ballz. But this rhetoric against them just plays into Trumps playbook. Please don’t be so blind and look past propaganda.

Sounds like more hypocrisy from the left to me. I certainly can't speak for everyone, but I think the fact that the left has relentlessly attacked and belittled everything to do with the right, people are more than willing to give them a taste of their own medicine. The right is sick of listening to a bunch of crybabies whining about anything and everything when they don't get their way. They're tired of all the manufactured lies, the propaganda, the hypocrisy and the manufactured crisis created from the left. Just saying, before you start calling out the right, you may want to take a honest and non biased look at the actions of the dem party.

Can the same not be said for the right?
Let’s be honest here.
And thanks for the assumption that I am a left but really I am a libertarian. Just wanna clear that up.

Beto got a big kick-back (aka "bribe") from factions in Mexico. Did you see the photo of him and Pelosi visiting with top corrupt officials down there?

originally posted by: CriticalStinker
a reply to: DBCowboy
I seriously think they are just doing this because Trumps big thing is the wall.


It's much more than that. Most high-level politicians lack integrity. They don't start that way, but after taking a few "payoffs" they're able to sleep well at night, in-spite of what they do wrong. Self = Priority #1.

I kinda thought there was a bit of hyperbole and rhetoric when people said dems wanted to tear down existing border walls, so if true and he really did say it, I'm a bit shocked really.

This has been going on since
President Reagan declared amnesty
and the Cuban Refugee Crisis.

Secure the border, and move on to
the myriad of other crises such as
Social Security, Student Loan Interest Rate Reductions,
and the Big Pharma/ Medical Billing rip off.

Furthermore, The American People should be able to purchase
their Prescription Drugs from Canada or elsewhere at free trade/fair trade
markets. The old Bush Bill to restrict such freedom in the favor of the big pharma
lobby should be stricken,null, and void.
In fact, that bill should be torn from the books and burned
in one of the The White House fireplaces this very evening.

The Eagle.
Not a bad flick. Check it out.

On one side,I am a descendant of those people
North of Hadrians Wall.

The Land of The Picts.
On the other...I have mentioned
that here already.

But does the Op even know of Hadrians Wall?
I wonder.
Good fences make good neighbors.
Walls are effective as well.
Even to the test of time.

I thought you might find this history
pertaining to "walls" interesting.

Here is a poem from Robert Frost
regarding such :

At Trumps rally I see people waving and branding red MAGA hats more than anything, not one US flag, to be honest ...

originally posted by: JinMI
a reply to: DBCowboy

His name is fake.

It's a rhetoric actually.


O'Rourke said fencing has forced migrants to the most inhospitable areas of the southern border, "ensuring their suffering and death.” More than 4,000 migrants have died as a result, O'Rourke said. "They’re dead, over the last 10 years, as we have walled off their opportunity to legally petition for asylum to cross in urban centers, like El Paso," O'Rourke said. "To be with family. To work jobs. To do what any human being should have a right to be able to do."

He wants a better route to those people.

Then he can begin with the one around the white house.

I don’t like Beto at all but I think I’ll take the police chief’s word on attendance before your picture.
God you guys are like a rabid dog frothing at the mouth and waiting for any chance to attack any and all those that are even slightly left.
Don’t get me wrong all but one dem candidates and hopefuls suck monkey ballz. But this rhetoric against them just plays into Trumps playbook. Please don’t be so blind and look past propaganda.

I'm sorry, but you guys kind of made the rules. Do you recall the Inauguration? Trump's lies were based on pictures of the crowds. The asshole left media hammered on that for a while. Pictures. There was a joke going around that if it wasn't for double standards, you lefties would have none at all. Please don't try to personify that, it's not a good thing, or something to aspire to be. Ask a friend if needed.