This is why Trump will be re-elected in 2020. Woman and Minority Jobs

Prior to Trump’s presidency, African-American unemployment had never sunk below 7 percent. In fact, it has rarely been below 8 percent since the government began keeping records in 1972. When Trump was sworn into office in January of 2016, it stood at 8.8 percent. While Trump has been president, unemployment among African-Americans has steadily fallen. It has now been below 7 percent since February 2018.

Then there is this....the AOC crowd who seemed not to be listening to momma Nancy and her head nods like earlier.


Some, including Rep. Alexandria Ocasio-Cortez (D-NY), frowned as Trump emphasized themes of compromise and national unity. But all — including her — rose in celebration as the president touted women’s success in the economy and in politics. “No one has benefitted more from our thriving economy than women, who have filled 58 percent of the new jobs created in the last year,” he said. The whole chamber stood in applause — even the women wearing white. 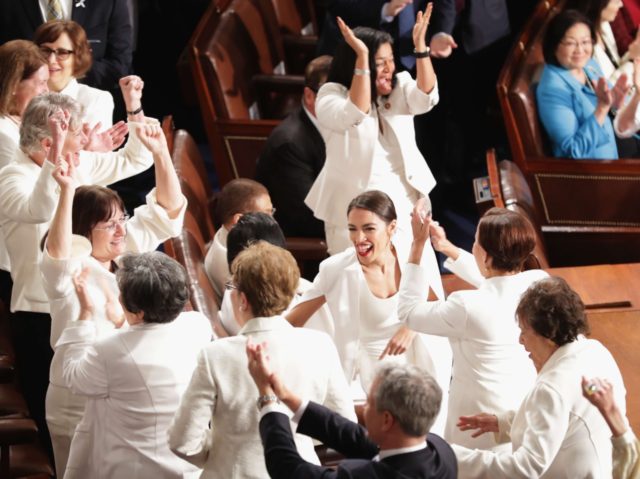 Tonight's speech was a turning point and it will be hard tomorrow to continue this resistance. There might be chance for a good appropriations package but if not, based on this speech, he is not going to slow down in rebuild the Unites States of America.
edit on Febam28amf0000002019-02-06T00:18:43-06:001243 by matafuchs because: (no reason given)

Interesting.
From your numbers I see a net gain of 100,000 full time, and half a million part times jobs added.
Simple math.
That is 300,000 full time jobs added to the economy.
Now I know math = logic, and pure logic dosn't equate out to the real world always.
So 600,000 jobs of the full or part time variety.

You cannot spin it as a loss.
You discredit yourself with your numbers.

I imagine most never-trumpers who watched that address (before cnn told them what to think) suddenly aren’t so never-trump anymore.

The whole thing was pretty good. He had a lot of dems clapping and standing throughout. Was a good positive speech and likely closed the divide if only a small amount.

My prediction: the wall is coming.

Pelosi wont allow it. If the wall comes expect a new speaker, before the new term shift.

matafuchs
+6 more
posted on Feb, 6 2019 @ 01:22 AM
link
If you do not get behind all that he said tonight you are not a part of this country. Eradicate HIV. Eradicate Child Cancer. Job Growth. First time in over 60 years energy positive. Job Numbers great. Over 5 million off welfare. Record low unemployment for minorities.# Socialism. Healthcare reform. New parent leave. More woman in Congress and his Cabinet than ever before. Need for strong border security and standing up for the rights of all, young, old or unborn. Projecting our military with an incredible tale back to WW2. Fantastic speech and no promises just policy. No wonder Nancy did not want it.

I get what both of you are saying....but it is the underemployment as well as the participation rate that needs to be looked at as well.

Positive numbers though, are always going to help the consumer confidence level...which means peeps be hiring...which means income tax revenues to offset the cost of the tax cuts.

Show me optimistic but cautious.

originally posted by: cenpuppie
C'mon now. Those jobs numbers are juiced like a Hi-C. It started with George, and continued with Obama and Trump.

I believe the numbers, my biggest problem is finding quality employees to fill my new positions at work.

posted on Feb, 6 2019 @ 04:38 AM
link
While the economy and unemployment rates have obviously improved under Trump.

I didn't trust employment numbers under any of our recent presidents, so unless the BLS has corrected how they calculate the numbers and just didn't say anything, then I have no reason to start trusting the numbers now.

posted on Feb, 6 2019 @ 07:14 AM
link
the regurgitation of breitbart on a website with the motto deny ignorance this place is a laughing stock

Richard • 8 hours ago That’s an amazing achievement, especially since multi-generational welfare has undermined the work ethic within lower black culture, not to mention the low priority blacks place on education. As a result, millions of blacks have absolutely no interest, ambition or skills to work even if jobs are available. Sad but true. That does not diminish the importance of Trump’s economic policies in lowering black unemployment to record lows.

As Reagan used to ask, "do you feel better financially?" No.

What a bold statement for your thread. The numbers he has put up do fall in line to suggest he would win. But let us just imagine that the far left media dumps the 2-3 chosen ones (Kamala, Booker, elizabeth) and goes for a much more viable candidate. Let's just say......Tulsi Gabbard
As you can tell by my sig obviously I was going in this direction.
Do you think Trump would fair well against her?

You are forgetting that the DNC doesn't want Tulsi... she's too moderate for the crazies in the base.

If the DNC doesn't want her then she won't win.

After all, the Democratic party primary has little to do with the actual voters.

posted on Feb, 6 2019 @ 09:46 AM
link
How about the Democrats at the president s state of the union address? Dressed in all white just like the old days. Only thing missing were the hoods.

The MSM does such a good job of ignoring good things, most of what President Trump cited as accomplishments were total surprises to a lot of liberals. Some had to go to their daddy, CNN.com (fact checker), to see if Trump was making shi't up.

That is very true! The left really wants nothing to do with her but yet promotes the absolute worst candidates they can find.
She is the one person that both left and right can get behind yet a massive smear campaign is being unleashed on her ATM.
The Democratic party is in a sad state and has MUCH rebuilding to do to become a viable party. Same can be said for the Republican party but at least they have someone to get behind.
The dems are done if they choose to go down the path they are on.


This president will not be re-elected. If Mullers investigation gets any closer to Trump, he should be in prison, by 2021. His lawyer for more than a decade, is going to prison, for campaigen finace violations, that were made at the presidents direction. If Cohen gets prison time for that, so should Trump.

If that doesn't put him behinde bars, New York's investigation of the CRIMINAL Trump Foundation, will.

If thoes don't put him behinde bars, the Inauguration invesitgation will, just where did all of that money come from and where did it go? It was not all spent on his Inauguration.

Or it could be the Obstruction investigation that puts him behind bars.

Of coarse I am specutlating, but that is my God given right.

There are more criminal investigation into Trump, than any other president in history.

I hope to God, another Republican goes against Trump and Wins! It probably wont happen, but that would be the best case.