Lets look at this months edition of newham magazine

posted on Feb, 5 2019 @ 08:13 AM
link
Ok, for those in the USA or in parts of England who don't know where Newham is, it's a Borough in East London and covers Manor Park, Forest Gate, East Ham, West Ham, Stratford. It is 5 miles (8 km) east of the City of London, north of the River Thames. Newham was one of the six host boroughs for the 2012 Summer Olympics and contains most of the Olympic Park including the London Stadium. The local authority is Newham London Borough Council.


Unlike most English districts, its council is led by a directly elected mayor of Newham. From 2002 to 2009 one of the councillors had been appointed as the "civic ambassador" and performed the civic and ceremonial role previously carried out by the mayor. The post has been discontinued.[5] The borough is considered part of Outer London for purposes such as funding. This is because the majority of Newham was not part of the 1889–1965 County of London. The council is actively campaigning to have Newham officially considered part of Inner London in order to increase its level of government grant by £60 million. At the borough elections held in 2014, the Labour Party won all 60 of the seats on the Council. Sir Robin Wales was re-elected as the borough's Executive Mayor with 61% of the first preference votes cast. In 2018, Robin Wales was deselected as the Labour Party mayoral candidate. Rokhsana Fiaz was elected in the position of Executive Mayor, also for the Labour party

Newham has the youngest overall population and one of the lowest White British populations or English heritance in the country according to the 2011 UK Census. The borough has the second-highest percentage of Muslims in the UK, after the London Borough of Tower Hamlets, at 32%. A 2017 report from Trust for London and the New Policy Institute found that 36% of local employees in Newham are in low paid work; the highest percentage of any London borough. Newham also has a 37% poverty rate, which is the second-highest rate in London.

So there's just a little bit of history and now it's predominantely Muslim area with a now elected Muslim Mayor. Once they had had enough of Robin Wales, they got rid of him and put a Muslim in as Mayor which will now stay as a Muslim Mayor because of all the Muslims who will vote for her in the elections and when she steps aside, there will be another one elected.

Anyway, lets talk about the cover of Newham Magazine for the month which is a magazine that comes out monthly: 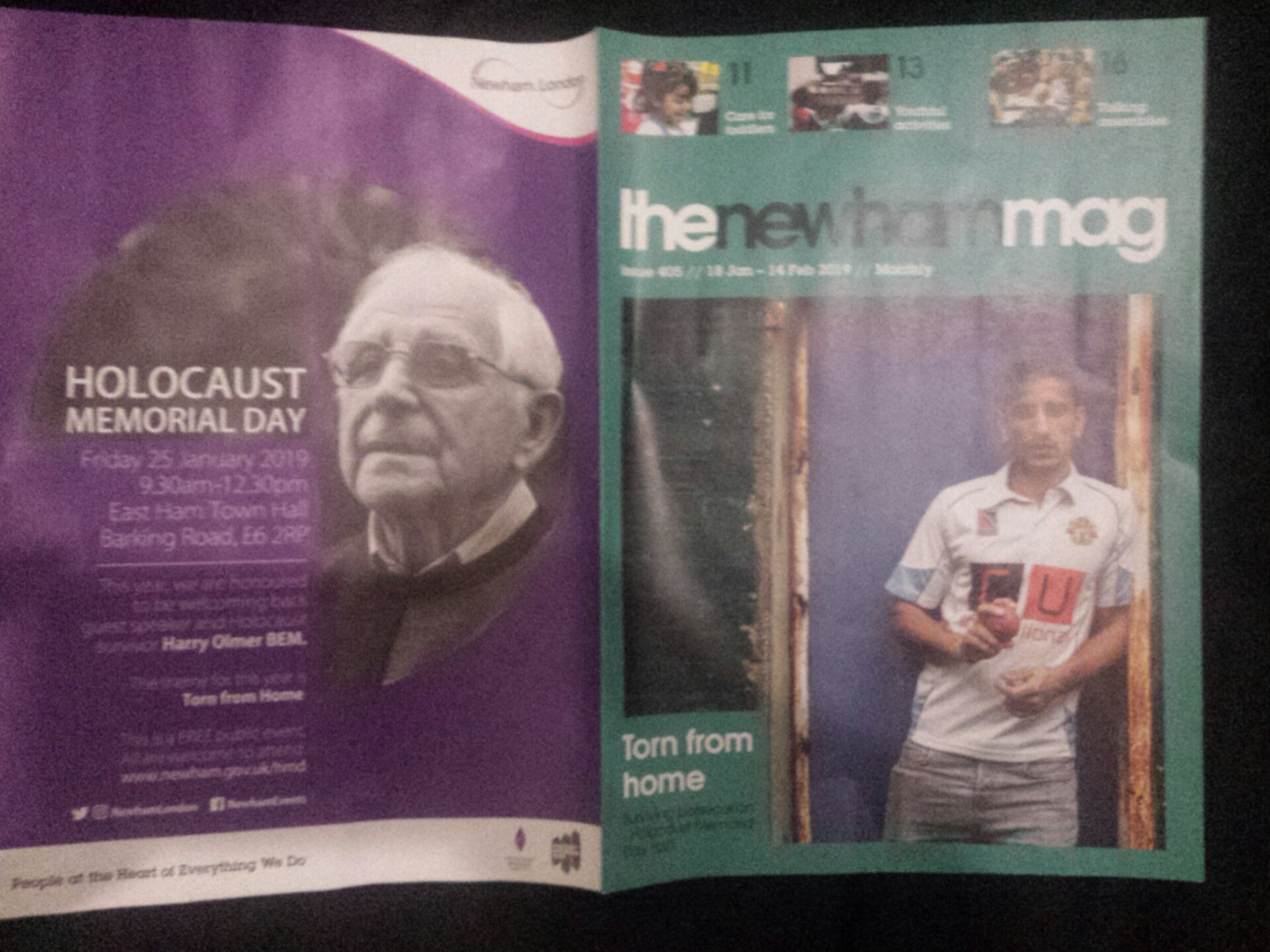 So the theme for the month is on the Holocaust and the Jews obviously but on the front cover we have a Muslim guy with a cricket ball in hand next to a very small headline which reads: TORN FROM HOME. SURVIVING PERSECUTION. HOLOCAUST MEMORIAL DAY.

Anyone see anything wrong here? You must all see it. Looks to me like 'conflict' of sorts, the editors of mag don't know whether to have a photo of what really matters here which is 'JEWS' or whether to put a Muslim on the front cover which is what they did. I'm guessing they've done this to appease the majority Muslims in the Borough because when i've walked around, I havn't seen any JEWS! It's totally opposite on the back cover of course where you do see a JEW who survived the War. 'HOLOCAUST MEMORIAL DAY.' should be the first 3 words in the title, not the last 3 words! TORN FROM HOME. SURVIVING PERSECUTION' should be on a totaly different magazine altogether or inside the magazine o a different page.

Inside the magazine on the page it says to read about 'THE HOLOCAUST' story, we have this guy with the cricket ball talking about his parents being killed in Afghanistan by THE TALIBAN. Is this anything to do with WWII? I don't see the connection. THe War in Afghanistan is nothing to do with WWII, it's a totally different War and really the story should have been about the poor JEW on the back of the cover who survived that time in History.

posted on Feb, 5 2019 @ 09:32 AM
link
a reply to: TruthxIsxInxThexMist
an article about the couple of million Muslims who fought for the allies in ww2 would have been a better story.
msm piece about it Muslim soldiers in ww2

Yeah but none from Afghanistan.

Anyway, the Magazine cover should feature the JEW who has been put on the back page not a guy with a cricket ball. It's a bit patronizing and oblivious.

The holocaust was about the JEWS who died in the camps... it wasn't about the rest of the War fought in other Country's! They are remembered in November!

posted on Feb, 5 2019 @ 11:01 AM
link
a reply to: TruthxIsxInxThexMist
i agree, but surprised that council has the money to publish a monthly magazine, my council doesn't, haven't even got public toilets anymore, what a waste of council tax money.

originally posted by: SerenTheUniverse
a reply to: TruthxIsxInxThexMist
i agree, but surprised that council has the money to publish a monthly magazine, my council doesn't, haven't even got public toilets anymore, what a waste of council tax money.


Another option could be that his council has been more fiscally responsible in order to have these extras which they probably feel promotes community cohesiveness.

You don't have to change the subject just because you were wrong. You could just say "thats true, I guess you have a good point." And then it would be slightly less inappropriate to add your side commentary.

what was I wrong about? and why be snarky with me? I was having a friendly exchange with the OP so if i have offended them i'm sorry, are you a moderator?

I even started my post with "i agree"
edit on 5-2-2019 by SerenTheUniverse because: added last sentence

Do you live in this area? Are you a Muslim? If not, would you even think of going into this area?
If not..................why ever in the world do you give a holy crap what's in their crappy magazine? Its kinda like me questioning whatever tripe they publish in some magazine in the mostly all Muslim Somali neighborhoods of Dearborne, Michigan!

What a stretch for a topic. Must be the slowest news day the UK has seen in years!

lol, i read local news stuff from the most rural places in the US and also the metropolis cities, it's way more interesting than your national news, newham magazine seems a big waste of money though, just do it online for free, most folk have smartphones these days, and if granny doesn't have one someone will tell her what great stories the council is putting online about history instead of fixing potholes in the roads.

I do live in the Borough of Newham at the moment, so I do feel the magazine has totally bypassed the reason for it's headline... very small headfline.

I'm just curious as to why someone would do that and I figure I have the answer but wanted to post a thread about it here to see if I'm right in my thinking.

Yeah, I thought ok... so this is supposed to be about Jews murdered and slautered but instead what i see here is a story about Muslims dying in Afghanistan. It just doesn't seem right to me. Why did the Jew go on the back page? Any why inside the magazine it's about this Muslim losing his parents in Afghanistan and not about the Holocaust which is what the headline states? The editors have somehow turned the Holocaust into a Muslim thing.

Maybe it has to do with the Mag's readers having far more interest in football than anything else. It certainly looks like an afterthought.

My favorite Brit local news paper is:
The St. Cleve Chronicle and Linwell Advertiser wherein I can read great stories like: ""Do Not See Me Rabbit".

hahaha! i know some obscure ones in the US, I go on google maps, find a small town then search for their news, can range from dog rescue in a flooded river to bake sales and shootings lol US is like 50 countries, all different. Friend of mine is from a rough part of Britain, all his local news is murders and violent crime.

originally posted by: SerenTheUniverse
a reply to: TonyS

Funny you mention about west ham fc. Most if not all west ham supporters come from outside the borough now. When you see all the caucasions in the olympic stadium, your like 'where the hell did all them come from?'