This story recently had people scratching their heads:

And back in early December 2009: UFO Pyramid Over Kremlin in Moscow?

The purpose of this thread is to find the earliest examples of this phenomenon. Not just sightings but anything that describes or depicts big pyramids hovering or flying.

In recent history it seems to me it started with a graphic novel from 1980. 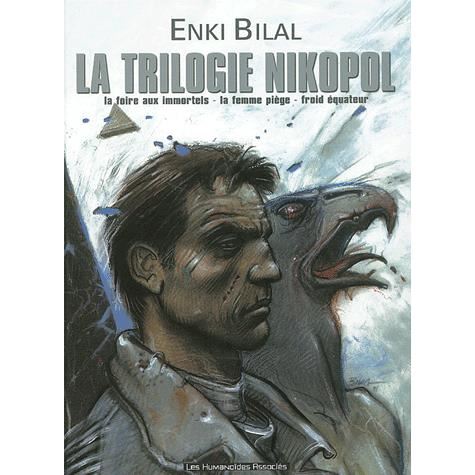 The Nikopol Trilogy is a series of three science fiction graphic novels written in French by Yugoslavian-born Enki Bilal, published between 1980 and 1992. The original French titles of the series are La Foire aux immortels (1980), La Femme piège (1986), and Froid Équateur (1992), which in 1995 were collected together in a single volume entitled Trilogie Nikopol. The individual stories were translated into English and published by Humanoids Publishing under the titles Gods in Chaos, The Woman Trap, and Cold Equator. In 1999, the trilogy was also published in English as a single volume, The Nikopol Trilogy. 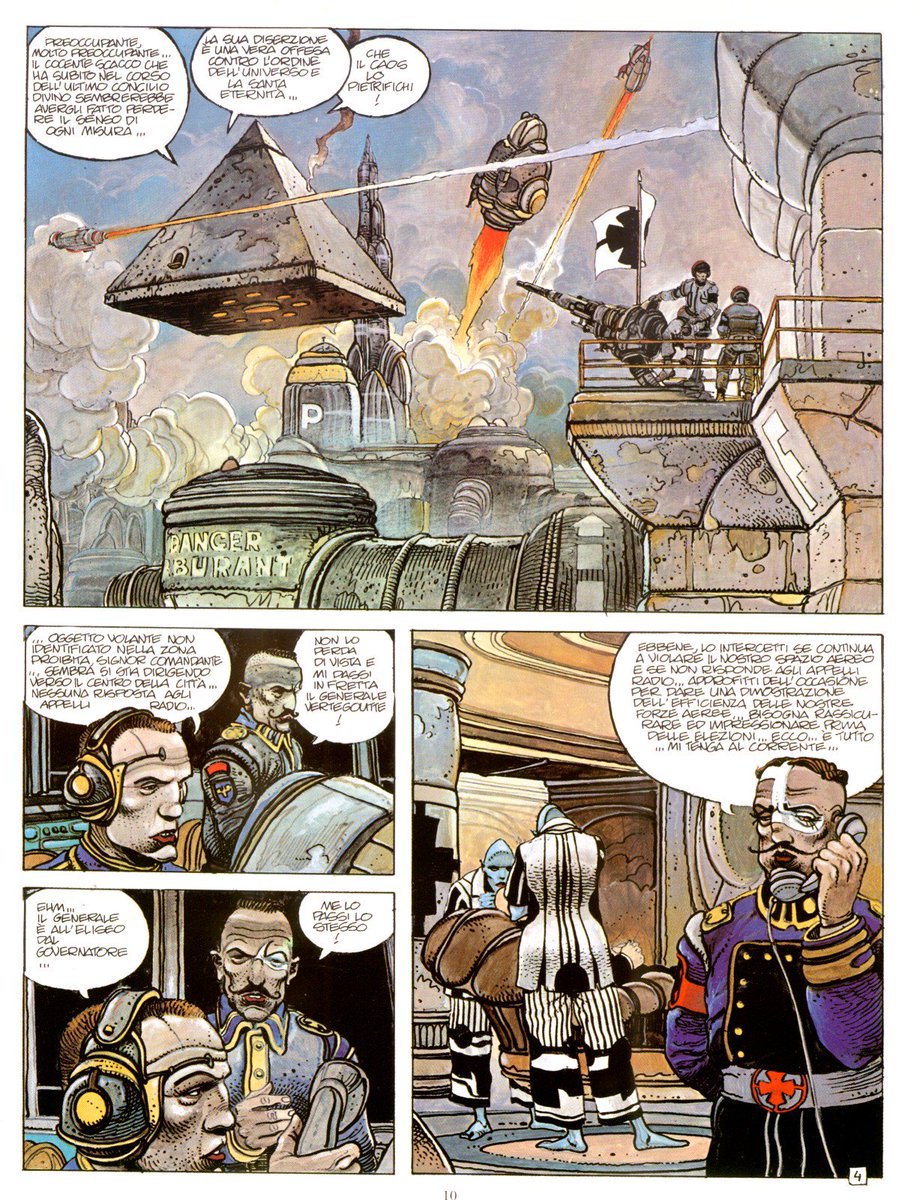 The synopsis for the trilogy is as follows;

For thirty years, Alcide Nikopol has floated alone in space, sentenced to cryo-preservation. When he finally returns to Earth, the year is 2023, and the world has been ravaged by two nuclear wars!

But the strangest change in the world floats above Paris – a giant pyramid, home to the recently returned Egyptian Gods, who would like to reclaim humanity as theirs, if only they could all agree…


Enki Bilal's art has been cited as having been influential for certain visual aspects of Ridley Scott's Blade Runner (1982) and even more so for Roland Emmerich's Stargate (1994) which in turn kickstarted the whole Stargate franchise (Stargate SG-1 1997-2007 and several spin offs).

2004 saw the release of a movie based on the Nikopol Trilogy directed by none other than Enki Bilal himself. 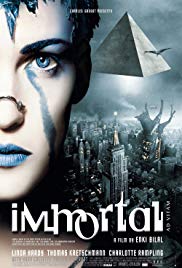 The film takes place in New York City in 2095, where genetically altered humans live side by side with unaltered men and women, and where Central Park has been mysteriously encased in an "intrusion zone" where people who attempt to enter are instantly killed. A strange pyramid has appeared over the city; inside, the gods of ancient Egypt have judged Horus, one of their fellow gods, to cease his immortality.

It is in this 2004 movie (Immortal - Ad Vitam) that we find the closest resemblance to the hovering pyramids over the Kremlin (2009) and the Pentagon (2018).

Here is a music video somebody made with more pyramid scenes:


Enki Bilal was born 1951 as Enes Bilalović in Belgrade, Serbia, Yugoslavia, to a Slovak mother and a Bosnian father. Remember the Bosnia Pyramid?

His name is quite interesting too. Enes, his birth name means 'human being' but he changed it to Enki, also known as the Sumerian god of water, wisdom, magic, mischief, and creation. Bilal also means water.

Know of any floating Pyramids before 1980 ? Let's hear it! On the speculative side I'm thinking maybe Vimana? Do they come in pyramid flavor? 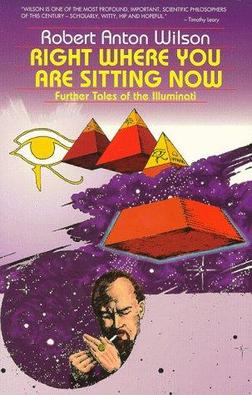 1982 Right Where You Are Sitting Now: Further Tales of the Illuminati by Robert Anton Wilson 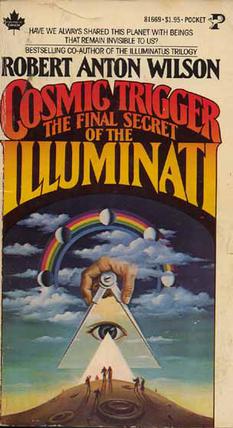 Fooking pyramid spacecraft hovered over cities.. WTF are you smoking?
edit on 1-2-2019 by Pandaram because: (no reason given)

posted on Feb, 1 2019 @ 02:25 PM
link
I think you'll find pyramids floating in a lot of literature, simply because it elicits an air of the unknown, rituals and secrecy. Pyramids are still a big question in the minds of almost everyone. It's not that there is meaning beyond the idea that people will not question it, but that there is this quality to it that lends to a story.

They can all be used to portray subtle meaning in a story to add an angle that doesn't require backstory.

I could be wrong, but this is why I also believe it's in a lot of popular 'entertainment' (said in quotes as it is far from it).. loads of all seeing eye, pyramids, archaic symbolism. Not because there is any truth to it, but it elicits that unknown quality to it. Something you don't have to explain, it is simply expressed and the rest is left up to the viewer.

originally posted by: Pandaram
Its never happened. This is all a divert tactics.. . its just lies and fake stories..

Fooking pyramid spacecraft hovered over cities.. WTF are you smoking?

I'm curious of what you are trying to imply here though..

I'm intrigued. Ok take out the non-corporeal.. go ahead say it, what do you mean?
Nice job making this thread MBSC OP

posted on Feb, 1 2019 @ 02:47 PM
link
Pyramid structures are probably just the easiest massive scale hologram that TPTB can currently pull off. They are simply testing out the technology and tweaking everything out before the "Big Event".

Right about at the point when all of the societies are about to crack with in-fighting and turmoil due to economic, cultural and religious ideologies clashing at the nearest WalMart - that is when the trigger will be pulled and Project BlueBeam will be initiated.

The "fake" alien invasion will shut down the power and cripple the militaries of the world (by design, in secret). The world will come together to fight this new enemy and 1984 will officially arrive. When this happens, you might as well run to the jungles and live like a native for the rest of your life because life as you knew it will be over.

ufor over kremlin was a hoax also by adyor vanderlei

posted on Feb, 1 2019 @ 03:21 PM
link
Op the bosnian pyramids are a blatant hoax that aimed to help tourism among others ,just saying

They will be here soon. Mark my words. They are coming.

Hovering pyramids … that is interesting, and reminds me of the Vimanas of ancient Hindu lore / writings in India:

Aliya Prokofyeva is not associated with the UN , nor NASA
They are trying to crowd fund a Space-City and apparently failing as she has on her page she has already had to cancel "major projects".

Nobody would give a damn if they hovered over Floyd Weemer's hog farm in rural Nebraska.

posted on Feb, 2 2019 @ 10:34 AM
link
Just a thought. In the bible's book of Hosea there is mentioned a curse on Israel and Judea. And it has a time line. The curse is 2 days in the presence of the Lord which according to Psalms 90 and 2nd Peter 3-8 are thousand year periods of time on the Earth. So what the prophecy was predicting a 2000 year curse on Israel and then a 1000 year "day of Jezreel".

If the Ancient Gods were to return this seems to be their time line. And based on a reading of Matthew 28 I would put the start of the day of Jezreel as no later than May of 2028.

The Nuremberg incident in the mid 1500's might have involved a triangle/pyramid of sorts. I'll rack my brains because I know there's at least 1 other sighting in history... Probably more.

Sightings over large cities though? I've never seen much good evidence personally. My own weird sighting of a triangle formation of lights (no craft) was above an insignificant city too. Their seems to be no rhyme or reason and I'm often curious as to why some push an angle even with legitimate sightings.

Aliens, demons or military? Yet the evidence pushing towards those conclusions isn't exactly strong. I mean most sightings have a lot of "woo woo" surrounding them. It sells. That tends to be the biggest motivator.

Most sightings tend to be random in location, some of the better sightings and recordings have been out of the way so to speak, handful of witnesses. People naturally won't believe them.

Then again you could have 100's of people have a sighting and people still won't believe them. There's a few well documented cases like that.

The Belgian wave comes to mind. Which was actually seen and tracked by multiple militaries. Maybe that was a cover-up? I mean I wouldn't put it past tptb to cover up a military incident. Like a multinational radar system going haywire?

I don't know dude, I mean they look fake as hell, but adyor & V7 really have not come out and said they created the pentagon video they just like Secure Team 10 on YT. At least that what I have found. So I am not sure if they are taking credit for it or not. Also Adyor does not produce earth shattering art, and the pentagon video seems to not really be his style. But IDK.

You know, the Indian Rukma Vimana could be the oldest reference that you might be looking for. You could consider it as a Pyramids. 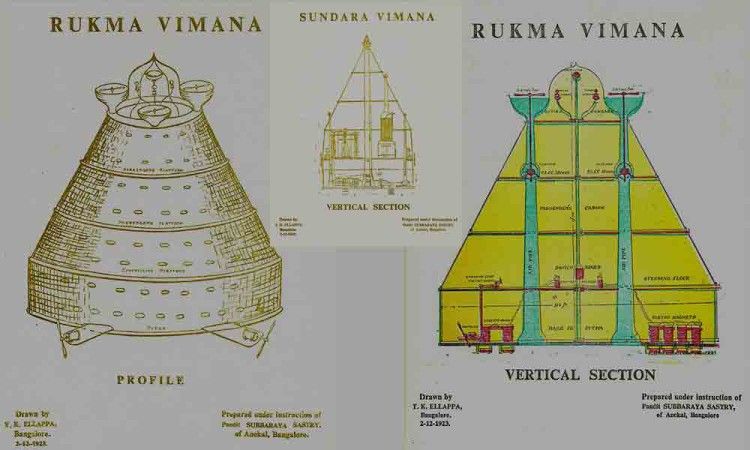