posted on Feb, 1 2019 @ 02:22 PM
link
LMAO at all the deniers and those who question the veracity of The Gateway Pundit. These facts were known and talked about LAST year, by other media outlets, which, of course, were ignored by MSM! Here's an article from August of 2018 that alludes that Hillary Clinton and U.S. intelligence officials colluded with Russians to entrap Trump. This is against the law and the reason why many people on the Right want this haggard, egotistical b!tch in jail!

But it wasn't Donald Trump who was guilty of Russian collusion. It was Hillary Clinton and U.S. intelligence officials who worked with Russians and others to entrap Trump.


That's the stunning conclusion of a RealClear Investigations report by Lee Smith, who looked in-depth at the controversial June 2016 Trump Tower meeting between officials of then-candidate Donald Trump's campaign staff and a Russian lawyer known to have ties with high-level officials in Vladimir Putin's government.


Events surrounding that now-famous June 2016 Trump meeting suggest it, too, was a concoction of Hillary Clinton and her deep-state allies. And that meeting was the basis for much of the later Russian collusion "investigation," if it can even be called that.


But "a growing body of evidence ... indicates that the meeting may have been a setup — part of a broad effort to tarnish the Trump campaign involving Hillary Clinton operatives employed by Kremlin-linked figures and Department of Justice officials," wrote Smith.


Smith painstakingly weaves together the evidence that's already out there but has been largely ignored by the mainstream media, which have become so seized with Trump-hatred that their reporting even on routine matters can no longer be trusted.


...the only real collusion appears to be on the part of the Clinton campaign — aided by the Obama administration, CIA chief John Brennan and a handful of high-level officials at the Department of Justice and FBI.


...these are serious felonies, using the federal agencies to spy on a political opponent in league with a hostile foreign power.


The media knew all this, of course, but largely ignored it.

This is exactly what I have said all along. Run the gauntlet with Trump's team and use a prosecutor 'against' Trump. Then, when it is said and done, assign a special prosecutor and use the evidence already collected. If he went right after HRC and the crew it would have been worse than this # show we have now in the media.

The facts in the Clinton case are huge. The fact that they had access to Podestas emails also. Weiners laptop. Humas access to things she should not have. It will be interesting to see how this all plays out.

Point me to anywhere in the OP or in any of the information you provided where anything is confirmed and I’ll change my view.

If you can’t do that, then the thread title and it’s contents are BS. Your opinion that something is confirmed is only your opinion, and doesn’t mean anything outside of that.

Sadly, everything that comes out these days in the media is only opinion; kind of like the entire Fox News, CNN, MSNBC, etc.

Interesting that so many roads lead to Hillary-or at least according to many different "opinions" not always based on "fact."
edit on 1-2-2019 by Justso because: sp

So Hillary was the one colluding with the Russians?

See, I hope now you guys stop listening to the crap CNN and the whole MSM tries to feed you with.

We'll get Trump yet, I mean, he colluded with the Russians, after all. We'll get evidence soon.

posted on Feb, 1 2019 @ 02:34 PM
link
If that election had went on another year, I’m pretty sure there would be wild stories of Trump having incited terrorists in Benghazi by bankrolling an anti-Islamic video.

posted on Feb, 1 2019 @ 02:34 PM
link
I think the most troubling aspect of things like the OP is that a lot of people aren’t even questioning it. They just see the word “Hillary” and do their own right wing reeee dance.

I have a feeling the people who believe this without question are the same people who for years thought the TV news was telling them the truth.
edit on 1-2-2019 by underwerks because: (no reason given)

What's worse two years of Trump being a Russian agent or one article where Hillary set it up? Entirely possible considering what she did to Bernie sanders

originally posted by: underwerks
I have a feeling the people who believe this without question are the same people who for years thought the TV news was telling them the truth.


Uhhh what kind of backwards argument is this? Isn't the whole mantra of the left right now that we need to trust the MSM instead of calling them fake news and diminishing the important work of our news reporters? So you don't believe the "TV news" when they constantly tell you Trump colluded with Russia right, surely you wouldn't be susceptible to that type of obvious propaganda?

What's worse two years of Trump being a Russian agent or one article where Hillary set it up? Entirely possible considering what she did to Bernie sanders

Lies are lies, no matter who it is that’s lying.

Isn't the whole mantra of the left right now that we need to trust the MSM instead of calling them fake news and diminishing the important work of our news reporters?

I have no idea. The only people who constantly talk about the left are right wingers. And forgive me if I don’t just accept others opinions as fact.

How can I do that when Hillary supporters and MSM are blind to the truth? You think for one minute that MSM are providing people with the truth? This is not just an "opinion." This story has been investigated by many politicians and journalists, with the only issue being they're Republicans/conservatives and they're disclosing their findings on Right wing media outlets. Obviously Liberals/Democrats and Trump haters aren't going to believe anything from these sites. Hillary has been leading all of you down the path she wants to take you and you've all been had! 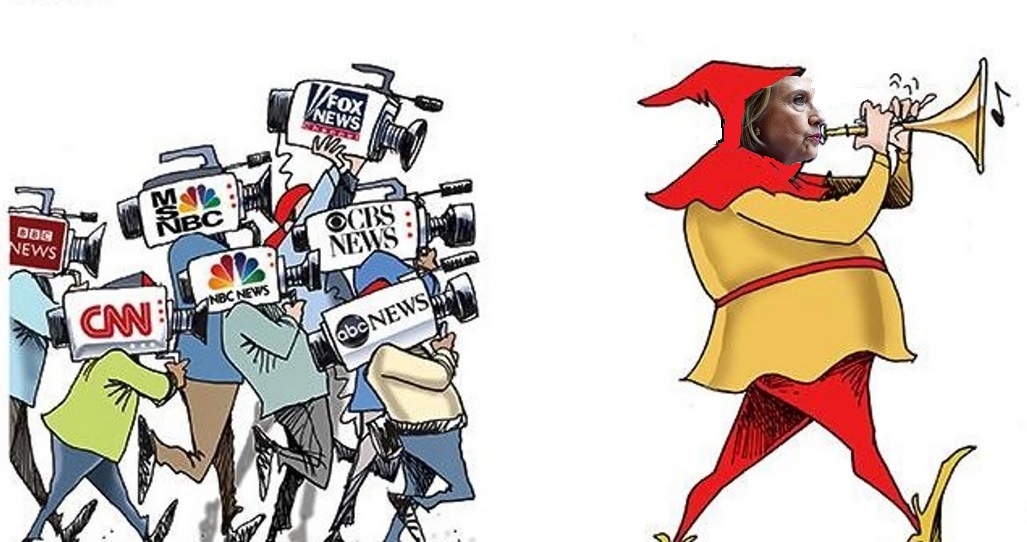 Careful now. Your desperation is showing.

Think you got his point. ALL of bs MSM is nothing but propaganda and opinion. Can't trust any of it-at all. Been proven.

Sounds more like you dislike his previous posts of not being a MAGA hat Trumper. The point he made was quite clear. Times have changed. Many people are waking up to the lies of the media. Right, left, Democrat, Republican, etc etc.

I get it people are gonna be super upset if Trump didn't get help from Russia. Two years getting worked up over something only to realize it was one big elaborate distraction.

Maybe this isn't true but I see and hear daily stories about Russia being presented as facts. The left hears it so much they already convicted Trump.

"Likely", so that is, maybe, might have, perhaps, possibly, far from confirmed, wouldn't you say?

posted on Feb, 1 2019 @ 03:37 PM
link
How is this confirmed? It's someone's opinion based on no factual information. I guess it's wishful thinking based on circumstantial evidence. Okay, so I did some digging because Republicans love to lie and spin.

I found this. It is a transcript of what Simpson said about his meetings with Veselnitskaya.

I can tell you what I knew. I knew she was coming in I guess on the 8th. I don’t have a clear recollection of the dinner, but I know — I believe we had a dinner. The problem is I had more than one. So I don’t have a clear recollection of it. Anyway, I saw her the next day in court at this hearing and I’m sure we exchanged greetings, but, as I say, she speaks Russian and I speak English. I think she was with Anatoli and she left afterwards. I know she didn’t tell me any other plans she had.

Q. It has widely been reported Ms. Veselnitskaya and Mr. Akhmetshin and others met with Donald Trump, Junior, Paul Manafort, and Jared Kushner on June 9th, 2016. Were you aware of this meeting beforehand?

Q. It didn’t come up at the dinner the night before?

Q. When did you first become aware of the meeting? A. Around the time it broke in the New York Times. I was stunned.

Q. Is it correct that that means it wasn’t discussed at the dinner on the 10th? A. No, but, again, you know, the dinner on the 10th was I was at one end of the table talking to a woman about her biography on Simon Bolivar and she was at the other end with Rinat and she doesn’t really speak much English.

The Misrepresentations of the Simpson Veseknitskaya Meetings

How can I do that when Hillary supporters and MSM are blind to the truth?

By showing actual confirmation of something when you use the word confirmed. That shouldn’t be hard to understand. If you have to jump all over the place to try and explain why confirmed doesn’t mean confirmed, confirmed isn’t the right word to use.

It's not confirmed at all, in fact, I debunked the whole thing by posting the interview with Simpson. It's just spin and propaganda.