She does not tell him when to have it. She is breaking a modern tradition of inviting them to the House Chambers. Pelosi is challenging time honored protocol...not Trump.

She is supposed to be bipartisan in her role and invite the president. It has been done many times. This is about control and not knowing ones actual place. Delusion. Hate. Obstruction. Resistance.

She is not president. She does not give the SOTU. Trump does. Anyway he wants. He could wipe his ass on a napkin, write wall with a Sharpie and send it and according to the Constitution...it would work. I mean, that is the main disagreement right now.

Here is the thing: I do not trust any elected official, no matter the party. I never have, and never will. They do not care about people, it is about money. I think that people like Pelosi, in her first 2 terms would have been great, but long over due for her to retire and allow someone else in that seat. That is the problem, there, the length of time that some politicians stay in office, and use others as political pawns to just to gain their support.

However, in this case, I am serious, we should not be surprised by the outcome, it was very predictable. Pelosi was not going to send a bill to give Trump a wall, and the only way for this to end would put it in his court. And as much as he likes to travel or go places away from the White House, he would have to end the shutdown.

Now we know he has to give the State of the Union address, as mandated by law. And he wants to give it in front of congress, using all of the back drop, to have all of the attention on him. Pelosi knows this and thus is using it as leverage against him. So in this high stakes she is going to use it against him, I would, to ensure that the next bill to keep the government open would be leveraged against him, to keep it open and sign the bill.

Now if I were Pelosi, one of the main agenda's on the table would be to get a bill, one that would be a spending bill to keep the government running, would be one of the first bills to be sent to the Senate, making a big deal about such and on the news. This would focus it on the Senate and McConnell to debate and see about passing it. Then to get it to Trump before the Feb deadline.

This would entrap Trump, forcing him to own another shut down. Now if he wants to out maneuver Pelosi, instead of say wanting to speak infront of Congress, send it in written form, thus taking that off of the table.


Acted like what? Shut down the government? Obama did. So did Clinton.

Pelosi was not going to send a bill to give Trump a wall, and the only way for this to end would put it in his court.

And as much as he likes to travel or go places away from the White House, he would have to end the shutdown.

Lol you can't be serious. He could have left the whitehouse at any point during the shutdown. He only didn't because he wanted to strike a deal and hold the optics of nancy and co jetting away every day as bad as possible. What he didn't count on is the media so blatantly carrying water for them and covering up that they weren't around to make a deal with.

Now we know he has to give the State of the Union address, as mandated by law.

Your proposed scenario is probably exactly what pelosi is thinking but I doubt Trump really cares about where he gives the SOTU. One thing he's proven time and again over the last 3 years; he's always a few steps ahead of the dems and the media.

posted on Jan, 28 2019 @ 02:37 PM
link
Miss Manners says Pelosi needs a lesson in etiquette. Other than that, who is surprised by her unwillingness to negotiate?

posted on Jan, 28 2019 @ 02:49 PM
link
Has any Speaker of the House ever pulled this kind of stunt before? I don't recall any precedent for trying to block the State of the Union address.

Nancy Pelosi is de-legitimizing the House of Representatives. If they refuse to perform their basic duties, then what use are they?

They think they taught the president a lesson. They taught America a lesson though, about how to act like a child. The aliens have taken over their bodies, I mean seriously, look at them. Just don't stare too long. 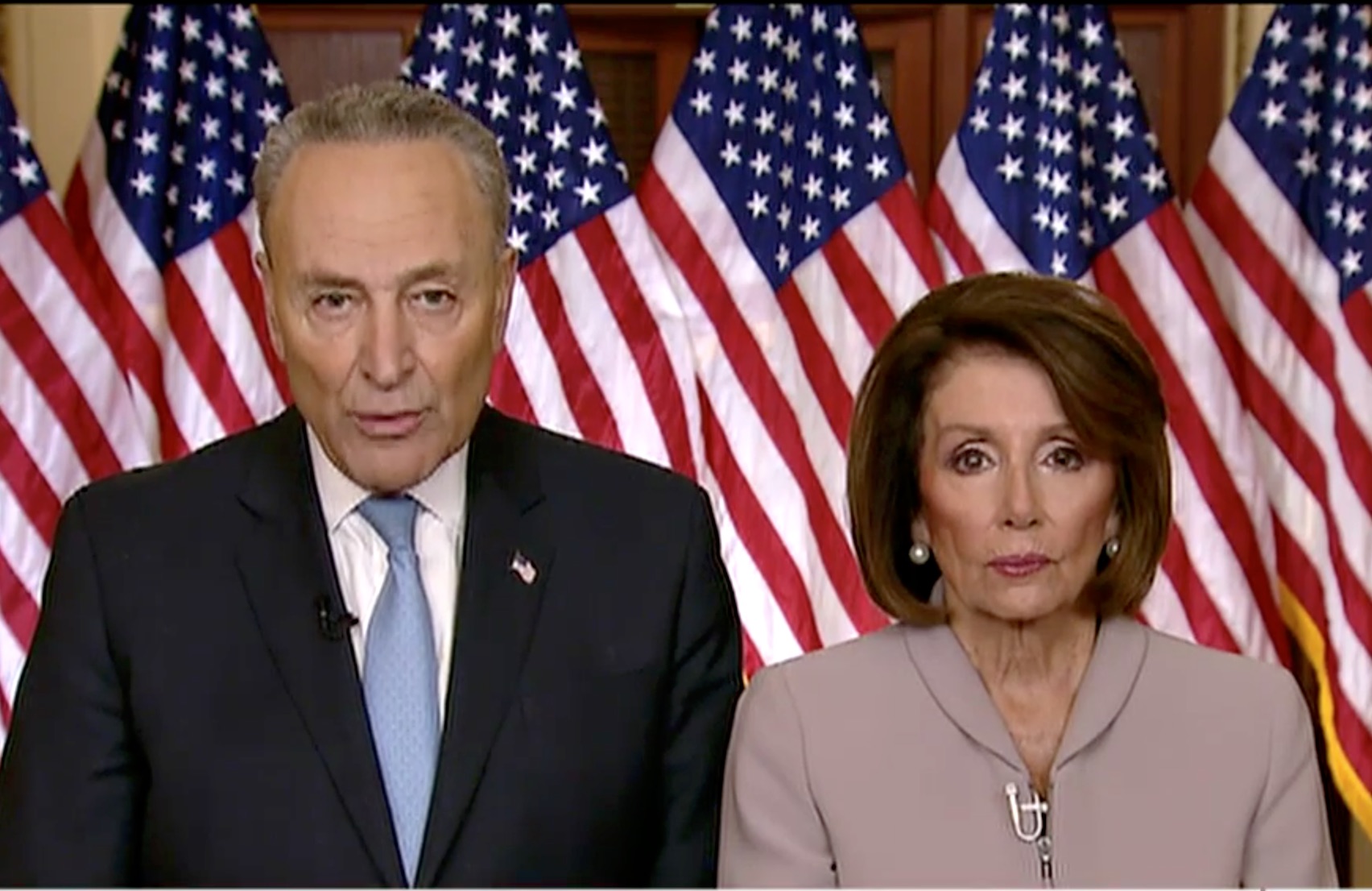 originally posted by: matafuchs
This is another gem. So full of themselves...


“Have I not been clear on the wall?” Speaker Nancy Pelosi told reporters Friday when one asked if Democrats would continue to object to wall funding in the upcoming negotiations. “I’ve been very clear.” Senate Minority Leader Charles E.

Schumer was more direct: “Democrats are against the wall.” Trump agreed to reopen government “without preconditions,” the New York Democrat noted, as he proudly pointed out that the agreement endorses the position Democrats have held throughout the shutdown.

“Our unity is our power,” Pelosi said. “And that is what maybe the president underestimated.”

He underestimated nothing. She is not the authority. The country is. The voters...or so we all think.

If Pelosi said it then it sounded more like, "Haf I not been fery clr on thwal"

Her slurring gets worse and worse. There's something seriously wrong with her. I mean outside of her mentally challenged thoughts.


At least the Taliban will negotiate.

originally posted by: Guyfriday
a reply to: LSU2018

Yeah they were trying to act concerned. Nobody with a brain cell bought it though.

originally posted by: xuenchen
Pelosi invites Trump to deliver State of the Union on Feb. 5

I hope he still does it tomorrow. Piss on Pelosi. Sounds like a setup to me.

"It is my great honor to accept," Trump wrote. "We have a great story to tell and yet, great goals to achieve!"

If he is steps ahead, then why is there no wall?

There have always been shut downs before, however, in the past it was never a President that caused it, and the fault lie within congress. And during the Obama and Clinton term as Presidents, it was the Republicans in the congress that caused the shut down's each time.


So how does one negotiate if the one side just gets up and walks way when told no? Trump did that several times, so why should they try to stay and reach a deal? And Pelosi did send bills to the Senate to restart the government, for which McConnell did not bring to the floor. allow for a vote and send it to the President, all cause there was no funding for a wall in it.

You would be wrong about Trump. He really cares and wants to give the SOTU. His ego, if anything, makes it where he can be easy to predict and manipulate.

As I stated, if he was smart, he would remove that option from the table, and send the SOTU to the Congress, written up and where it can be read into the record. However, the man wants to use the congress as a back drop, so he is not going to remove it from the table and thus it can and will be used against him.