As many are aware, there was an incident in our Nations capitol this past weekend which sparked outrage and controversy across the Internet and has also had real life consequences. There were death threats made via various social media platforms, primarily twitter; a teacher in another district in another state attempted to doxx the student at the center of the controversy and ended up doxxing the wrong person, a country music artist offered all his albums on vinyl autographed if someone would, "fire on," any of the students who were at the event, an internet personality offered oral sex if someone would assault any of the kids from the group, a producer attached to Disney tweeted about the students being fed into a wood chipper and included a disturbing graphic, and on and on; see Related Links and ATS threads below.

Many of those tweets have since been deleted and account made private, but we all know that the Internet is forever.

As a result of all of the above vitriol and hate, consequences are coming due.

An article in, Gateway Pundit (yes, I know about the Kamala Harris thread in which an incident was taken out of context, that's a garbage story) was posted a couple of days ago based on a podcast (see Related Links and ATS Threads below), about an interview in which Kenton County prosecutor Rob Sanders is interviewed and speaks of some of those consequences.

We’ve got multiple ongoing investigations into numerous, numerous threats,” Mr. Sanders said Tuesday in a podcast interview with 700 WLW. “There’s probably a dozen law enforcement agencies, if not more involved in this — it’s growing, it’s spreading, there are other jurisdictions now involved in this,” Sanders added.

700 WLW radio host Willie Cunningham brought up the death threats towards the Covington teens made by bluecheck verified accounts on Twitter and asked Mr. Sanders about Kentucky law.

There are laws on the books regarding the kinds of threats made and what those who make such threats are subject to:

“There is. It’s called ‘terroristic threatening’ in Kentucky and it is a felony offense punishable by 1 to 5 years in prison to make a threat of violence to an educational institution, so everyone who makes a specific threat.”

Mr. Sanders made sure to clarify that saying “nasty things” about the Covington kids is not the same thing as making an “actual threat of violence” against Cov Cath or any other school in Kentucky that’s punishable by 1 to 5 years in prison. The punishment can go up to 5 to 10 years if they talk about using a weapon of mass destruction.

These are felony charges and extradition is a distinct possibility.

Now, many of the threats were made anonymously because those people know that should they be able to be identified, they would face the exact consequences mentioned above. However, many of these people are known and even have verified identity information on file with twitter. Some of these folks may well regret falling for a false narrative.

Mr. Sanders reminded listeners to the radio show that it’s not going to be an immediate process because these investigations take time. “You have to prove who’s behind the Twitter handle,” Sanders explained.

“It’s not an immediate process, but it is a process that will get done,” Sanders said, adding, “It will not surprise me to see charges against multiple people before this is all over.”

Laura Ingram had Mr. Sanders on her program

Rob Sanders: When it comes to the offenses that rise to the felony level we can extradite. Now it’s not as easy as arresting a Twitter handle we can’t just reach out and arrest someone, half the time they’re using a fake name, fake profile picture, that sort of thing. We have to go through the process of issuing subpoenas, search warrants… It’s already underway. I’ve had detectives in and out of my office all day today.

The native drummer Philips is not noble as is being pushed

BIll Cunningham 1/22/19
January 22, 2019•103 min
Members of the Sioux and Apache tribes stand with Cov Cath, they join Willie; Rachel and Seg on the Stooge (fast forward to 21:34 for the segment which include Mr. Sanders)

The Digital Lynching of Covington Catholic

UPDATE: Michelle Grissom has been placed on leave from her duties at Mountain Ridge Middle School. The school’s principal sent out the following message to parents today:

“I am writing to share news regarding one of the social studies teachers at MRMS. Michelle Grissom is currently on leave. Please understand that I am unable to share specific details, as this is a personnel matter. I recognize you may be concerned about the timing of this, as we have just started a new semester. However, I want to reassure you that I am working with our staff to ensure a smooth transition for our students. As you may know, we had a substitute teacher in class today and will continue to do so, as needed. All of us at Mountain Ridge Middle School are dedicated to the success of your children. Thank you for your partnership and understanding.”

Should these people face prosecution and dismissal from their employment?

edit on 24-1-2019 by IgnoranceIsntBlisss because: (no reason given)

UKTruth
+21 more
posted on Jan, 24 2019 @ 04:32 PM
link
I really hope people see jail time for these threats.
Some people need to be made an example of and quickly. Two or three celebs behind bars will send a much needed message.

It's about time this behavior is punished. That's what the laws are there for. I wonder when Twitter will ban these accounts? Not holding my breath..

Regardless of any other outcome, Mr. Sandmann has achieved Internet immortality and been memed 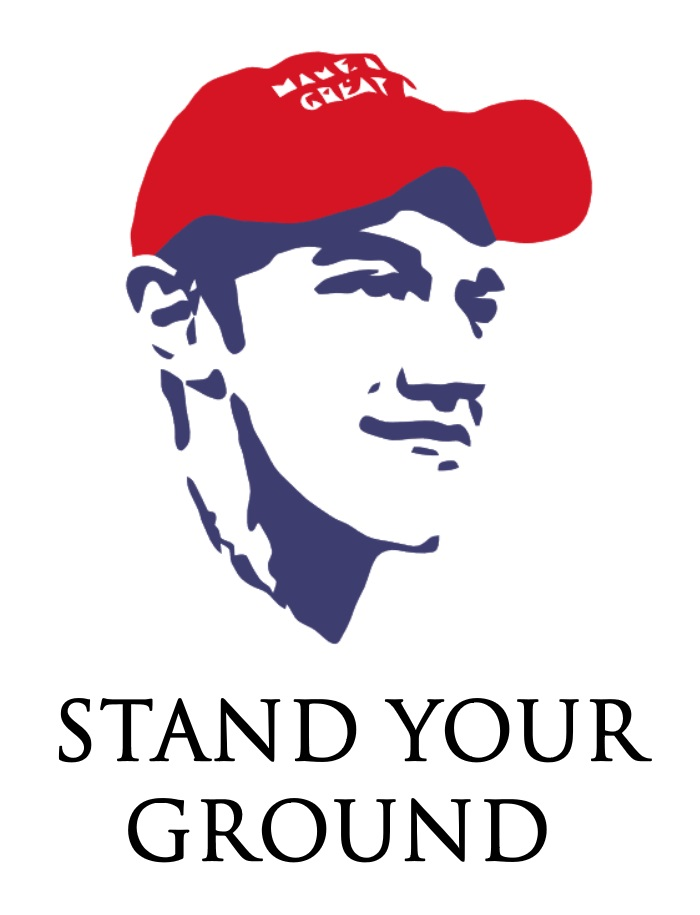 posted on Jan, 24 2019 @ 05:09 PM
link
I love the Greater Cincinnati area. People here will circle the wagons to protect our kids in this region.

posted on Jan, 24 2019 @ 05:13 PM
link
There is no one size fits all, but certainly some of these cases should equate to a severe punishment. The fact that people offering services and payments for violence against kids does not equate to an immediate public shaming and dismissal is astonishing.

posted on Jan, 24 2019 @ 05:17 PM
link
Good. Those that threatened violence or death to these children need to experience consequences.

Others need to see it’s not acceptable.

Well, the Mountain Ridge Middle School was pretty quick to place the teacher there on leave once her tweets were brought to the attention of the principle of that school. I am wondering if Disney will fire producer Jack Morrissey over his tweet: 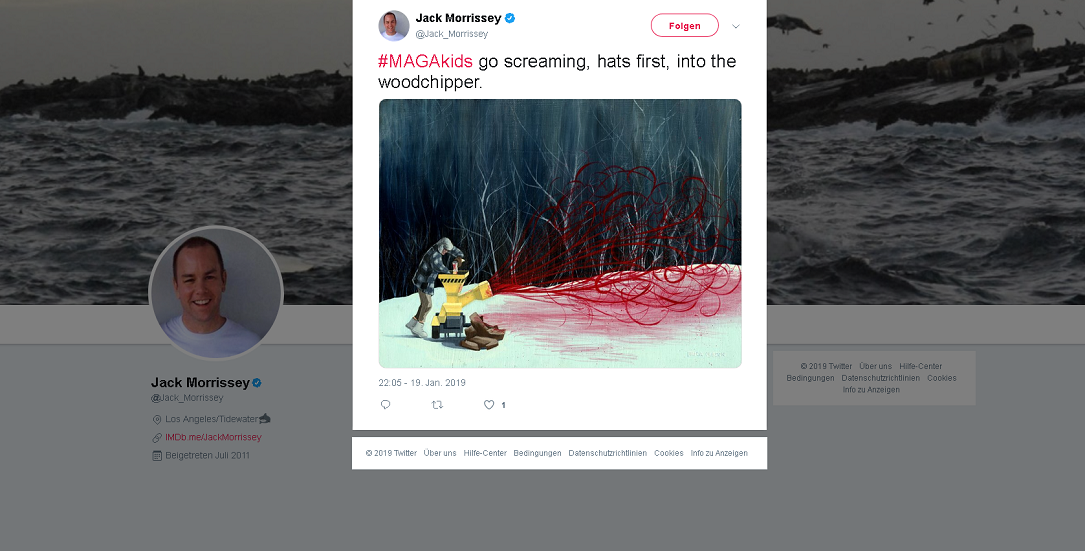 He is attempting to cover himself by calling it satire.

Quetzalcoatl14
+2 more
posted on Jan, 24 2019 @ 05:21 PM
link
Yeah this is the canary in the coal mine, that it’s gone too far. That in current times grown men in person can harass and say bigoted things to kids, and people across the media and social sites blaming the kid, sending death threats, and excusing the men, is horrific. Ten years ago this would not have been considered acceptable.
a reply to: TheLead

posted on Jan, 24 2019 @ 05:23 PM
link
If a person thinks harassment, bigotry, and threats of violence are okay aimed at kids just for political beliefs, then they shouldn’t be teachers for k-12.
a reply to: jadedANDcynical

To me, that Morrissey tweet was gruesome. One has to be a bit psycho to post something like that regarding a child or teen. He really really needs to be evaluated, imo. Evil sob.

posted on Jan, 24 2019 @ 05:26 PM
link
I hope they all get the maximum punishment. Maybe we can even get some hyper partisan people in key places to really dig the knife in deep like the left do repeatedly. You know, a dose of their own medicine. 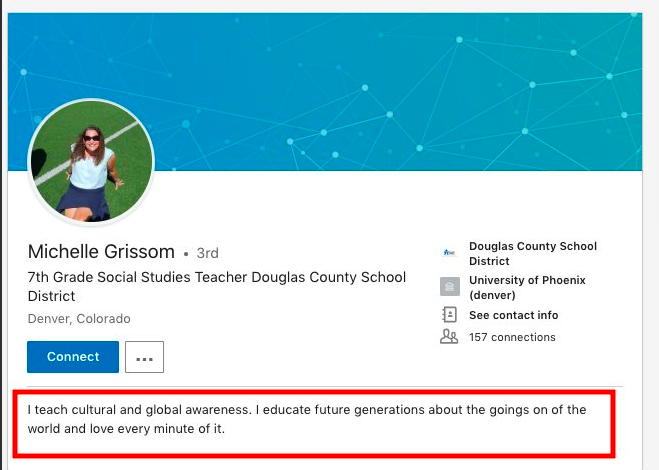 She also does not seem to have much regard for border patrol agents: 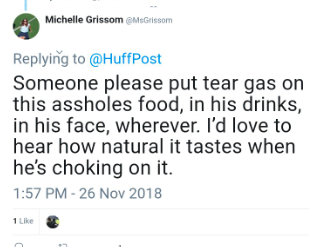 I'm wondering where he got that image. The 'blood' is stylized and looks like it was made to have a 'festive' appearance with all the curlicues.

This is very tempting to wish upon them, but I think they should face what is fair and just and nothing more or less than the average person would regardless of their level of fame. Sentencing might take into account that they may have greater influence based upon the size of their audience though.

I just love how the right endorses bad behavior just so long as it triggers liberals. SOunds like something liberals would do.

posted on Jan, 24 2019 @ 05:40 PM
link
These people are merely signalling their hopey-changey bonafides to one another. The prosecutor should lay off.

Yea I agree, just letting my anger come through my words. I’d honestly be happy to see a couple of the big names brought down though. If for anything just to set the example that this is unacceptable. We should be protecting our children, not wishing death upon them because they have different opinions. Hell, that’s the whole point of college is to form your own opinions about different topics. I guess those days are over though unless you lean left.

posted on Jan, 24 2019 @ 05:48 PM
link
I am glad to see law enforcement going after those making death threats and threatening violence toward schools.

Twitter seems to be a magnet for the idiots and lunatics of the US.

Anyone who doxxed needs a visit at the very least.


Anyone who made direct threats needs jail.

This needs to be a lesson that no matter what, you don't f### with kids.


that’s the whole point of college


These weren't even college age kids. Covington Catholic is a high school. These are children still.