Instead of wall, why not make it a crime to hire, harbor and support illegal immigrants?

Hospitals cannot refuse service to someone coming in with an emergency, the illegals do not have insurance or medicaid because of their status. So, the government passes on uncollected service to the people. Now under Obama law, the insurance companies give more money to the hospital if they show these unpaid bills are higher. So a hospital where we live has reimbursement rates based on how many people walk out without paying, the insurance companies pay more. This raises our employers costs to get insurance, so basically people with insurance are paying for those without insurance who do not pay, citizen or not.

The hospitals do not care, their workers get paid and they make their profits. The only ones hurt are you and I with higher deductibles and insurance costs. This artificially keeps the government from having to pay for these bills, it makes them look less expensive because the tax we used to spend to cover these bills is now paid by employers and employees who have higher premiums and deductibles. This law change actually predates Obama, but under Obamacare it did increase costs a lot because more people are walking out on their remainder bills since Obamacare convinced people to utilize hospitals more.

The illegals are creating more jobs for California's Health care industry which citizens pay for, if they build the wall, the amount of money that the hospitals get reimbursed for their services will go down and they will have less High paid nurses and doctors working. There is a lot of reasons California wants immigrants, they are getting cheap labor and they are getting more for their hospital services so they can afford to pay more for their nurses. Think of the other gains that California gets from all these low paid workers, like more school funding based on more students coming from the government taxpayers.

If enforced the law and increased the penalties, think that would end the need for any walls for the most part, unless the wall is really intended to keep everyone in and not about keeping out.

Sanctuary towns and areas sound like might be good, like a buffer zone, could be on both sides of the borders and have jobs like manufacturing that could be paid a certain wage and housing and food...use the land that is not being used and create like a sanctuary states.

think if it was a federal law and enforced properly, there would be lot of compliance in California and elsewhere...
ICE comes to the door with DHS and CPS, as the parents of legals could face imprisonment and going to jail...not just a pay pass..

Loose children, job, home...think if was 90 days notice to comply or else...then start making examples like life 20 years for a joint was used against pot smokers...

Something just not adding up, way more to the wall, than meets the eye.

Only a few states have adopted E-verify and it should be enforced nationwide.
I think the chamber of commerce would burn Washington DC to the ground though if we did that though.

Every time I see lobbyists groups pushing for amnesty, most of the time it is lobbyists for business.

How coincidental, Trump just posted his thoughts on the options......

The thing is, the illegal aliens do not know about our laws before they come here.

Every attempt made to get it mandatory in states gets shot down by the lobbyists groups backing whatever team is in power.

posted on Jan, 23 2019 @ 07:35 AM
link
*facepalm* Yes, lets give corporations police powers to investigate everyone to make sure they are who they claim to be, instead of having bought a stolen id from the millions of ids available on the dark web. Of course if they're going to do a full investigation to see if a crime was committed, then it's only proper to give them powers to arrest people. And we can expand this to other crime. I could easily see Walmart staff kicking down someone's door because their child took a candy bar when the parents weren't looking and paid with a bank card.

Private police would be so great with our private prisons. *eyeroll* 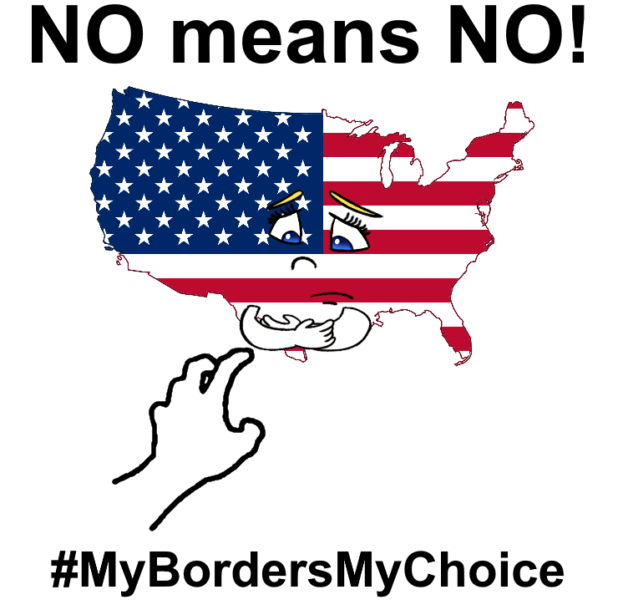 I pointed out that increasing penalties and cracking down to the point of "no strikes and you're out" will create massive unemployment among Hispanic Americans. This is not about hating Hispanics; it's about protecting the borders. I have (legal citizens) Hispanics in my own family; I don't want them to be unable to find a job because they look Hispanic!

You're also bringing up the spectre of "cruel and unusual punishment" that would likely get such an extreme law stricken down.

It would help move the debate along if you actually responded to the concerns raised.


originally posted by: dojozen
If someone thought they could loose their job, car, home, and freedom, for simply hiring an undocumented worker...
Think things would change real quick.

Sounds like you've never run your own business. There's already a box on the I-9 where someone has to indicate whether they are a citizen, a non-United States citizen, legal alien resident or on a work visa. If they lie about this and also have what appears to be the proper documentation there isn't much the employer can do.

It is a loophole for the employer then to get away with it, just like the loophole of hiring contractors that they know is full of illegals but have no skin in the game.
With E-verify, they have to match the picture to the person.

Anyone that seeks power isn't fit to wield it.

posted on Jan, 23 2019 @ 07:44 AM
link
It is already crimes, except liberal whackjobs set up sanctuary cities. I don't know how a federal judge hasn't struck that crap down the second they suggested it.

Oh, I know it exists. My point is that the illegal aliens who come here know about any laws that benefit them and the loopholes to get around the laws that don't. They are not legal scholars. Most of their information comes from agents close to the border and from the coyotes themselves.

They're not going to stop coming just because we passed a law last week that said they couldn't get hired. The number of illegal hirings that are never discovered is massive. We call it "day jobs." Illegals gather at a predetermied location in the early morning and those wanting to hire them pull up in a truck, load up how ever many they need, work them for a day, pay them a pittance, drop them back off, and report that they didn't hire anyone that day. It's next to impossible to prove they did.

In other words, the law will not deter the immigrants, only the hiring of anyone who might be illegal.

originally posted by: jacobe001
It is a loophole for the employer then to get away with it, just like the loophole of hiring contractors that they know is full of illegals but have no skin in the game.
With E-verify, they have to match the picture to the person.

E-Verify can be circumvented too.

originally posted by: TheRedneck
They're not going to stop coming just because we passed a law last week that said they couldn't get hired.

It's our personal dirty little secret, illegals are tolerated because they do many jobs no one wants for the wages offered. There is no one solution, the issue invovles many aspects of our society and economy and each one of them needs to be addressed in turn if you really want to seriously curtail the paradigm.


originally posted by: jacobe001
It is a loophole for the employer then to get away with it, just like the loophole of hiring contractors that they know is full of illegals but have no skin in the game.
With E-verify, they have to match the picture to the person.

E-Verify can be circumvented too.

It has a higher success rate than checking a box that you are not an illegal.
The persons picture is in the database.

Accuracy for authorized workers. E-Verify immediately confirms more than 99 percent of
work-authorized individuals. Westat identified two reasons for erroneous rejections of
authorized workers: “out-of-date or inaccurate federal records and data input errors.”
USCIS’s advice for authorized workers who receive a TNC reflects these sources of error.
Among its suggestions are that the employee failed to report a change in their name or
immigration status, that SSA’s records are inaccurate, or that information was entered
incorrectly on form I-9 or into the E-Verify system.

Trump says 63,000 killed by illegal immigrants....not sure ISIS has killed that many around the world in all the countries...combined...

If True, seems like labeling illegal immigrants as Terrorist would be in order and same for those who support the terrorist?

Should be very simple to verify if a person is documented or not, has a work visa or whatever...anyone suggesting otherwise, that it is impossible and a wall is better...better at what keeping people in?


en.wikipedia.org...
The Real ID Act of 2005, Pub.L. 109–13, 119 Stat. 302, enacted May 11, 2005, is an Act of Congress that modifies U.S. federal law pertaining to security, authentication, and issuance procedures standards for state driver's licenses and identity documents, as well as various immigration issues pertaining to terrorism.

Title II of the act establishes new federal standards for state-issued driver's licenses and non-driver identification cards.
Changing visa limits for temporary workers, nurses, and Australian citizens.
Funding some reports and pilot projects related to border security.
Introducing rules covering "delivery bonds" (similar to bail, but for aliens who have been released pending hearings).
Updating and tightening the laws on application for asylum and deportation of aliens for terrorism.
Waiving laws that interfere with construction of physical barriers at the borders.

think if it was a federal law and enforced properly, there would be lot of compliance in California and elsewhere...

You could have stopped writing right there!!

You could have killed about 10,000 birds with a single stone...possibly even millions!