Ocasio-Cortez: World Is Going To End In 12 Years

posted on Jan, 22 2019 @ 09:59 AM
link
This past Monday, the young Liberal "firebrand" made another strange comment, this time concerning climate change and the future of our planet:


The world is going to end in 12 years unless the government takes action, Rep. Alexandria Ocasio-Cortez (D-N.Y.) said Monday at a Martin Luther King forum in New York City.


Remember, this is the same woman who gets a hissy fit when "fact checkers" prove her wrong.

Ocasio-Cortez, D-N.Y., has been called out by fact-checkers at a steady clip since her upset primary win last year over then-Rep. Joe Crowley. She's apparently had enough. On Monday, she took aim at PolitiFact and The Washington Post fact-check unit for supposedly singling her out.

“Facts are facts, America. We should care about getting things right. Yet standards of who gets fact-checked, how often + why are unclear,” Ocasio-Cortez tweeted Monday. “This is where false equivalency + bias creeps in, allowing climate deniers to be put on par w/ scientists, for example.”

What's REALLY scary are the number of Democrats who would consider Ocasio-Cortez for President:

A new Axios/Survey Monkey poll shows that 74 percent of Democrats and those who lean toward the party would consider voting for her if she were able to run. As is, the Constitution prevents anyone under the age of 35 from serving as president.

That fact alone is as funny as the bullsh!t that comes out of Ocasio-Cortez's mouth! But then again, she probably gives "zero" f--ks what anyone thinks...especially her Democratic colleagues:

Rep. Alexandria Ocasio-Cortez admitted that she gives “zero” f–ks when her Democratic colleagues criticize the youngest woman elected to the House for speaking her mind.


Then she has the audacity to state:


nypost.com...
Got news for you...you talk like a young kid and an idiot. 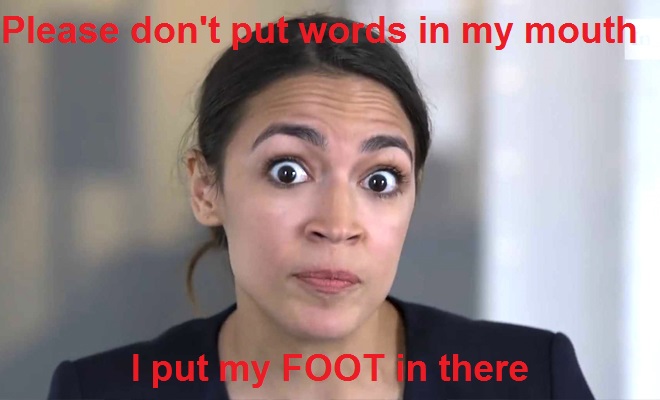 Just what action can be taken ? We can't change anything .

originally posted by: Gargoyle91
a reply to: shawmanfromny

Just what action can be taken ? We can't change anything .

If you'd just shut up and let them take as much of yours and everyone's money as possible (all of it being the limit) they could fix it and save the world!

Here’s an excerpt from her interview with Ta-Nehisi Coates:

COATES: “I hate to personalize this, but do you think it is immoral for individuals to, for instance — do we live in a moral world that allows for billionaires? Is that a moral outcome and and of itself?”

It’s not, and I think it is important to say that — I don’t think that necessarily means that all billionaires are immoral. It is not to say that someone like Bill Gates,for example, or Warren Buffett are immoral people. I do not believe that.”

OCASIO-CORTEZ: “Yeah, I don’t — I’m not saying that, but I do think a system that allows billionaires to exist when there are parts of Alabama where people are still getting ringworm because they don’t have access to public health is wrong.

posted on Jan, 22 2019 @ 10:15 AM
link
This cortez woman is delusional, trying to spread fear among our population. I sure hope she doesn't believe the crap flowing out of her mouth at times. Are all people in New York that bad?

“Facts are facts, America. We should care about getting things right. Yet standards of who gets fact-checked, how often + why are unclear,” Ocasio-Cortez tweeted Monday. ”


Rep. Alexandria Ocasio-Cortez admitted that she gives “zero” f–ks when her Democratic colleagues criticize the youngest woman elected to the House for speaking her mind.

Think about that Progressives....

posted on Jan, 22 2019 @ 10:27 AM
link
So climate change is this generations world war 2 eh? The climate nazis refuse to give enough money to stop the world from collapsing. Those evil billionaires that support her candidacy and others like her have to clench their teeth a bit whenever she speaks.

Ringworm isn't caused by lack of healthcare but lack of hygiene. Don't anyone tell her there is no worm involved, she's free to have her own beliefs.

She is bringing humor back to politics so that's a good thing bless her little heart.

I saw her standing next to Pelosi. Both have that crazy bug-eye look and sound just as crazy.

Of course, we do have to keep in mind that Trump made it to the White House and he also says alot of crazy but at least he can back it up with experience and intelligence.

Really nothing to fear from her. Unless her handlers let go of the reins. Even then. Move along. Nothing to see here.

Sure, but she makes it easy, just like Trump has on occasion.

posted on Jan, 22 2019 @ 10:32 AM
link
Ringworm? Ringworm? Really? That's the gripe? Wash yourself and buy some generic Lotramin, will run you about $3, clear that right up. If you can't afford that $3 for cream, I don't know what to tell you. Of all the absolutely goofy snip to complain about, Ringworm. JFC.

Thankfully she’ll be the Dem nominee in 2024 and will insure a Rep is elected.

are you frightened? calm down, she wont eat you, i think. smart women. good looking. i would trust her. how old is trump? 88?

Pollution is the only way to cool the Earth down from its natural weather pattern. Ironically, the left have built a platform on how pollution caused the Earth to warm.

You trust someone whether or not you think they are attractive.

No wonder the human race is #ed.

originally posted by: odzeandennz
The new target for the 'right '.

LOLOL, I love your comments. Reading them puts me in a mindset to not take anything seriously.

of course not! i'm an adult. i watched some of her speeches.

Afraid? Ha. Not likely. As I stated. Nothing here to see.

She is bizarre sounding and certainly not blessed in the looks deprtment.

Did you drink the kool aid?