originally posted by: Quetzalcoatl14
I’ve said this forever: environmental conservation IS conservative and responsible. During the bush years too many conservatives denied basic realities about pollution, industry “externalities,” etc.

All environmental sustainability means is literally living within our ecological means and making sure our environment is safe for future generations. Those that fight such ideas aren’t being conservative at heart. They talk about fiscal responsibility and balancing the budget but willfully don’t want to do the same with environment.


The people crying about global warming in Europe are actually people who profited a lot by destroying the environment. It fueled their riches, and by taxing the people now it can keep their riches flowing. I had a lot of respect for the tree huggers and environmentalists years ago. I did not agree with all of their disruptive tactics though, but some big businesses were planting people in their groups to stir them up so public sentiment was against the environmental groups. This happened quite a bit over the last four or five decades. 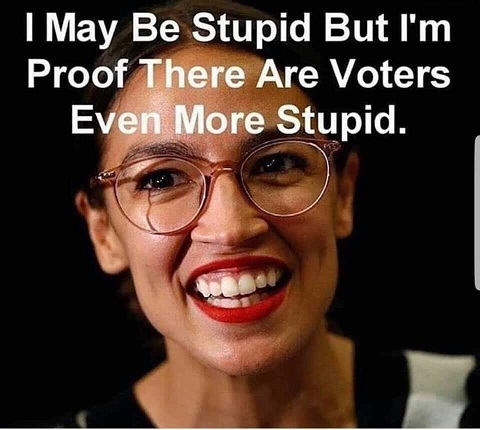 Ummm...straight from the horses mouth...

How high do you think she can count...with her hooves...?

Asking for a friend...

To be fair, if she were the Democrat nominee for president, I'd consider just I consider all the nominees. I considered Hillary too.

But just because I consider someone, doesn't mean I'm going to end up voting for them.


You are very considerate. Considerably so.


The first question anyone with 'brains' should have asked her is 'what exactly do you mean by end of the world? Can you define please? Do you mean humans being all wiped out? Do you mean less wealth and no more status quo?;
definitions are really important, especially when saying such stupid #.

I would have thought that elected 'officials' would have to be educated in things like logic, the classics, etc.

Exactly, it's always hyperbole like END OF THE WORLD! and made-up-numbers with no basis....

posted on Jan, 22 2019 @ 01:36 PM
link
We should be doing something about massive pollution world wide... Funny how Republicans jump all over a Democrat for saying something silly but will defend trump no matter what silly things he says.

It's just a two-party system that blindly cheers for their chosen side.

Unless your criticizing both sides (including POTUS), you're just another drone in the divisive two-party system. Pushing your hate towards one side and throwing golden praise on the other.

ATS is supposed to be about questioning our reality and systems of society. It should not keep getting caught
In this left vs right paradigm. Remember the loathed "MSM" ? Now Republicans on ATS are excluding FOX from the hated "MSM" ... And I wouldn't be surprised if Democrats on ATS were praising CNN..

You all fell into this trap and now worship the thing ATS used to hate..

Who are you referencing?

I call out trump all of the time. Same with Fox.

Especially when they are pushing for things like foriegn wars.

I constantly say that the establishment republicans and dems are about the same, and the media is their mouth piece.

DOes that mean I can not point out when a would be socilaits leader announces she feels the world will be dead in twelve years, while she is releasing plans for massive government intrusion into people lives to stop this apocalyspe, and how dangerous this has been in hostory when the Pots and Maos of the world have done thes ethings?

originally posted by: ausername
Meanwhile Niagara falls are freezing over....


yup, they do that. water freezes at the right temperatures. welcome to nature at work and doing it's thing. even back in the 1840's water stopped flowing to the falls due to ice and natural weather. welcome to the north, it gets cold and water freezes.

I was just ranting in general. Not aimed at you.

This is a bit off topic, but I view the trend of ATS being more right wing lately, as opposed to mostly being anti politics when I joined up 13 years ago (wow ugh), due to baby steps towards what most conspiracy theorists want deep down which is: transparency, accountability, respect, and common-sense, good-for-everyone policies.
In other words a majority of ATS thought or thinks that Trump is a step in the right direction and that he doesnt really represent the 2 party system, hence the insane blow up we are seeing in the media and political worlds. Almost as if Trump IS a conspiracy theory. Does that make sense?

Of course his supporters may all be getting duped, and I tend not to pass judgement on that, but that's WHY I think it is the way it is now (ATS).

It's up to the people to decide. But the earth will be fine.

ATS might appear to be right wing but I think that's because the left wing people are not really that bright. In the debates, they mostly confine themselves to the Democrat echo chamber. However, when one looks at the range of subjects discussed, they are all very politically correct. In other words, you are permitted to have right wing positions only with the boundaries the left has set.

I could list many issues which are discouraged here. Not much written about the women's marches like right to life, not much allowed about affirmative action, etc.

I recently ran across a Breitbart article on how Soros's organizations are funding BDS activism. Imagine all the cans of worms that would open any one of which would get me censored at the very least. People complain about censorship on YouTube and Facebook but I have been censored posting comments and video from both. So my conclusion is we operate within a highly restrictive environment even more controlled than those.
edit on 22-1-2019 by toms54 because: error

You should start a thread on the Soros thing, I am interested.

originally posted by: blueman12
a reply to: Grambler

I was just ranting in general. Not aimed at you.

Oh I am sorry then, i just wasnt sure.

Certainly we should be willing to call out all sides, and there are people who wont do that.

I feel that when people start talking about needing radical government control to stop the end of the world, we should all stop and be worried.

ATS has always been sort of contrarian at heart to me.

So if the whole media is sayong aleins arent real, ats tends to take the opposite approach.

If the entire media says we need to attack iraq, ats is usually on the other side.

Its a place to get away from the insane conformation bias in our culture and media.

Now that bias is nearly completly favoring the establishment democrats.

So non establishment left leaning people and in greater numbers right wing people point out issues on ats that arnet being discussed.

Trump, whatever he ends up being, is attacked mercilessly by the establishment left and right. The media is nearly always negative on him.

And so just like in the past, the contratians on ats refute this echo chamber narrative.

As a result, it probvably seems "right wong" but I dont think that is the most accurate way to look at it. Its just "counter main stream narrative"

originally posted by: chris_stibrany
well that sucks! Didn't used to be that bad.

You should start a thread on the Soros thing, I am interested.


I already have too many warnings. You can read it at: Target Israel: George Soros-Funded Groups Leading BDS War on Jewish State