posted on Jan, 21 2019 @ 06:22 PM
link
On another thread I started reading about 4 people who where murder by illegal immigrants in the posters state. And he went on diatribe saying Eff-you to liberals. He wanted to round the 20 million illegal immigrants and start deporting them. He blamed liberals for the deaths of the 4 people.

There are lots of public policies I do not like. For example, since 9/11, it is estimate that over 2 million people have died in the Middle East since the forever war on Terra-ism started. Here's where the next terrorist is going to come from. Check out this guy who's pregnant wife was killed by US bombing attack: 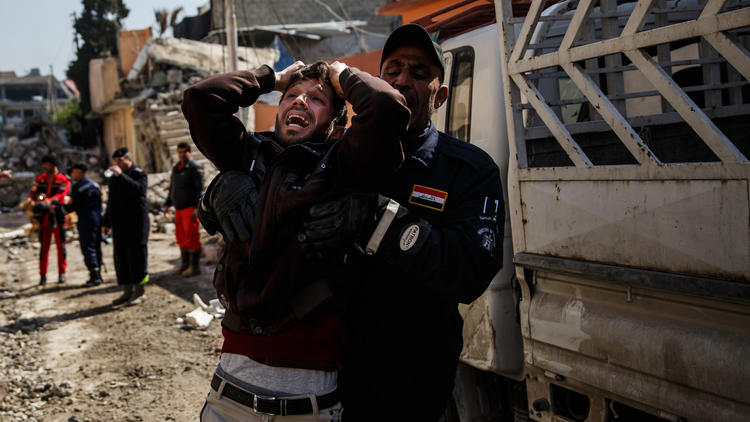 More than 200 civilians killed in suspected U.S. airstrike in Iraq

There a lot of public policies I don't agree. And rounding up illegal immigrants and putting them into concentration camps or physically removing them from our country I don't support.

Murdering someone is against the law, period. We do not need new public polices attacking immigrants. Lots of murders are black. Will you next be suggesting we start shipping all the black people back to Africa? This is pure insanity.

We need good public policy. Not irrational scapegoating politics. How about some foreign policies changes "encouraging" Mexican government to address the reasons why so many people are coming here in the first place. Then maybe if there's better opportunity in Mexico then maybe all the illegals will volunteering leave or stop coming. Then we will not need a stupid Wall which is not going to work and is just a giant boondoggle.

originally posted by: dfnj2015
How about some foreign policies changes "encouraging" Mexican government to address the reasons why so many people are coming here in the first place.

I think it's mostly due to how corrupt and ineffective the Mexican government is that it compels people to flee that country.

Your title is so apple and orangey. Good freaking luck with that, I mean your hurt feelings.

and in both instances politicians are to blame - doing what they do best - pay lip service to taxpayers whilst carrying out the globalists agenda.

Because you don't want Donald Trump to pull troops out of the Middle East, remember? That would be wrong?

No one is suggesting shipping immigrants out. That's YOUR hang-up.

We are demanding we cease making it easy to enter illegally while streamlining the process of legal entry and immigration. 4 people in my area were murdered. There have been 4 other high profile murders in the last year committed by illegals in the US. 4 out of the thousands that happen yearly.

You are trying to conflate two issues to engage in a discussion that makes no sense fundamentally. I think you're finally out of ideas. You should probably just go to sleep.


He wanted to round the 20 million illegal immigrants and start deporting them. He blamed liberals for the deaths of the 4 people.

Quote where I said that. I talked about border security you liar.


He blamed liberals for the deaths of the 4 people.

I blamed HIM for the murders and LIBERALS for the sanctuary policies that made it possible for him to STAY here.

Good lord, you are a garbage liar.

posted on Jan, 21 2019 @ 06:44 PM
link
Seems pretty much everyone opposed those wars. Trump and his base certainly did if you paid any attention to his campaign.

Except the American and European left who have become the biggest warmongers in history following Trump's decision to pull out of Syria and Afghanistan...

Where does it end, exactly?

posted on Jan, 21 2019 @ 06:51 PM
link
There is not much this government has done in the past 25 years I agree with or condone. What to do about the failure and corruption we seen now? I don't know but just know I no longer support our federal government because of the continuous corruption and failure to support the citizens over corporate greed.

posted on Jan, 21 2019 @ 06:53 PM
link
Spinoff threads and duplicate threads on the same topic in the same forum are not allowed.

Please continue in the existing thread.