posted on Feb, 23 2019 @ 11:29 AM
link
I'll try not to sound too ridiculous in my imagination, but I can see an effect, possibly at the string level, where the darkness of space is replaced by a bright golden light.

Like the fall of Atlantis, the bright golden light could have disappeared when intelligent life was destroying other life for power.

If anyone can see this fallen universe concept at all, more power to the world.

The universe would be so consistantly illuminated, that everything in perception is transcended into an animated looking existence. I'll try to stay conservative with past life regression, but there is a cartoon-like quality to some of the distant memories.
edit on 23-2-2019 by Superunknown528 because: Always more things to add...

posted on Feb, 23 2019 @ 01:08 PM
link
Back to the science and technology, energy crossovers are likely going to be the answer to our modern age. The Quantum Mechanical Oscillator is a goal, the information is there.

One of the small steps to progressing to a higher Psionic order of logic and function of the Stynth.
edit on 23-2-2019 by Superunknown528 because: (no reason given)

posted on Feb, 23 2019 @ 01:42 PM
link
In reiteration of everything about the Stynth, Energy is classical, Harmonics are quantum, and Psionic is the higher order.

Would be interesting to find out if Psionic beings conjugate their own nutrients and H2O from the Stynth, let alone everything else in material through higher meditation. Transcending science fiction into reality...

I love Kundalini, but I hate chakras. Long live the higher order Stynth.

I enjoy comparing your ideas regarding the singularity you refer to as a Stynth, I would like to reiterate what I know, also, regarding reality.

Matter, Motion and Will is all that there is in creation, and I can assimilate in my own mind how frequencies, running concurrently can create more than their individual parts, as with a major chord producing harmonics, that would continue well beyond human hearing. Vibration is the foundation of everything, even what we believe to be solid matter.

Creating a Stynth would involve finding the chord (set of frequencies) that are perfectly matched to the object you want to affect, the chord may not be in the human range of hearing.

I think the hardest part would be identifying the correct frequencies to cause the affect. It may be that we can produce a chord in the audible range and step it up as a chord combined electronically to produce an UHF that could be translated to light and then focused through a crystal.

If you can equate the frequencies to physical elements, using the frequencies to shape the molecules creating simple matter through that process would be a simpler goal, than say, conjuring a rose from out of thin air, however if we could identify the signature of a rose then maybe its possible to recreate that signature with all its frequencies and materialise it through light condensing into matter.

The point I am trying to emphasise is that Harmonics and Psionic’s are affects created by consciousness and used to control matter, this is how it works in all dimensions of reality.

The physical world is a singularity in itself, it is the apex of coagulated monads, where matter is restricted in its movement and is at its slowest, and is what creates the illusion of being solid.

It is difficult to create complex bundles of frequencies of matter from light using consciousness alone in this dense physical dimension and I believe that techniques to achieve this affect have been mastered in the past.

In a nutshell, ancient science agrees with your ideas, but at the same time it would suggest that we have to get a handle on the aether, the state of matter that is used for building templates in the physical world .. the Aether is invisible matter in this world, not the next.

It is an etheric template that forms the scaffold for a human body, in fact for anything physical.

We all possess an etheric body as well as a physical body we also have an emotional body a mental body and a causal body .. all different states of matter existing in all of those dimensions simultaneously.

We only have objective consciousness in this dimension of course unless you are sensitive to other dimensions which would then suggest you are a long way, along the path of human evolution.

We will all gain objective reality in each of the dimension as we evolve as a species, during our waking lives. We do gain objective understanding of other dimensions between lives of course.

In the next dimension of Maya, matter is easily manipulated through conscious thought, it is actually difficult not to create matter in the next world, as it is much finer and in affect our consciousness is much more powerful to control it.

The more I read of your work the more I can see Nicolai Tesla, he was on to the same concepts, maybe your are his reincarnation determined to reveal that knowledge in this age, you appear to be driven by a passion for humanity.

I love Kundalini, but I hate chakras. Long live the higher order Stynth.

Kundalini is subtle energies, I will always refer to everything as energy because by definition any affect in this creation is the movement of matter and matter in motion is energy regardless of how course or subtle it is.

The chakras are simply the connection points that interface your bio energies with subtle dimensions and are the conduits for life itself. You could describe anything we witness in nature as a Stynth, because they are unique bundles of frequencies bound together by nature.

The goal of a Spiritual scientist would be to emulate those Stynths in the physical world by copying natures methods of creating them. Materialising physical objects through the power of the will.

Very humbling! I appreciate your input and views toward everything, to say the least.

The Aether is one of the mysteries that inspired my search beyond light itself, and the void between the strings of existence.

I agree there are chords of frequencies involved with everything. There is also timing of the chords put together, time in seconds is just a concept, finding the rhythm capable of resonating to the infinitesimal is a goal with crossovers into scientifically explained energy and eventually harmonics.

There are certainly frequencies out of human range, just like infrared and ultraviolet, science helps us out with this, maybe humans develop the ability to perceive them tangibly in the future...

I do agree all matter is energy, whether or not the stynth in disharmony is the presence of energy itself, it is a goal to figure out someday with harmonics. Einstein and many others were right without a doubt, they all gave us a technology format to build upon...
edit on 24-2-2019 by Superunknown528 because: (no reason given)

Redefining the imaginary number, always established as a square root of -1, non-existent hence the name imaginary. When it is a cubic root of -1, the value of the constant "e" and pi exist within it. One of the attempts to start building the quantum mechanical oscillator, the imaginary value of "i" represents a complex value breaking away from the regular x,y,z axis arbitrarily, likely in conjuction with the Planck constant, a pure mathematical value of polar revolution(2pi) complete with an energy value in joules, also the new standard of metric to define the kilogram.

My dream is to build mathematic algorithms out of any given reaction and "print" an object, shapes thus invented out of surprise to the mathematician, one of the engineering and technological goals of the 21st century. Imagine a rocket engine designed with such infinitesimal precision that combustion can be handled within a 3d printed ABS plastic chamber, for example, let alone special alloys of metal... 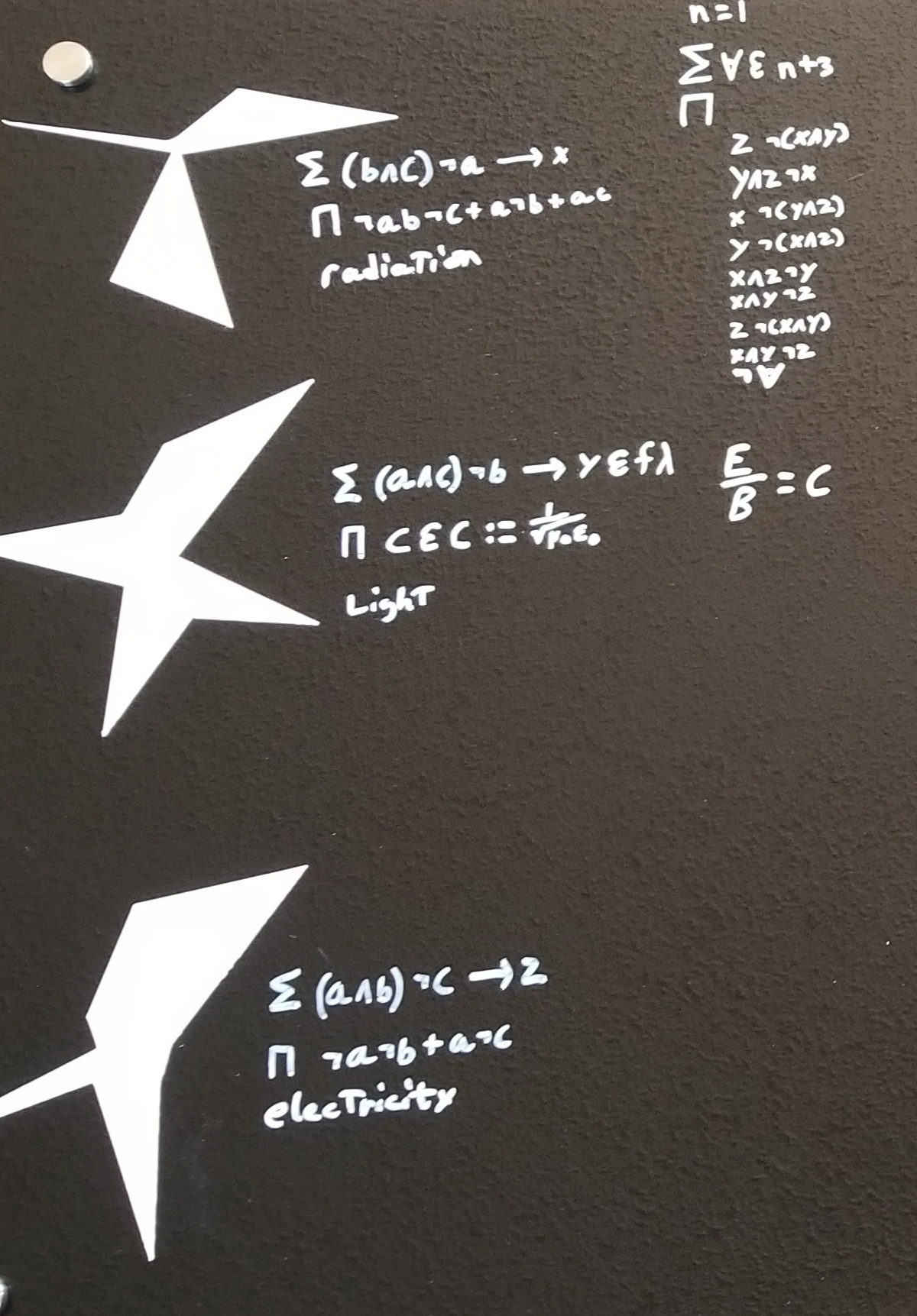 Building a scientific crossover from higher order logic over to Electromagnetic variables derived from Maxwells equations.
edit on 7-4-2019 by Superunknown528 because: (no reason given)

could satellites manipulate frequencies out of our range of detection to interact with a humans vibrational frequency, changing the frequency or vibrational energy of man?