posted on Jan, 22 2019 @ 06:12 AM
link
Hilarious that now the narrative is, instead of blame those that, if you actually watched the videos, were starting conflict based on color of skin and wearing hats, no lets blame the adults in charge of the children, because then we're not actually blaming the kids, but we still kinda are. Dont you ever get sick of being wrong? Dont you ever acknowledge when youre wrong and tell yourself, man maybe some of my ideologies are just flat out wrong and I shouldnt be blindly following them? Are you really that stupid? Low IQ? I cant imagine having so little common sense that I blindly follow like some of you do.

Why the upset over the Haka - Since when does an Indian chief speak for the Kiwis. I didnt know they were at the event.

Maybe its a Catholic Jesuit plot, or a Black Hebrew plot. Maybe one more plank in the scaffolding leading to an outbreak in the States. Nothing "Deep State" would love better than Martial Law.

The legislation is in place. The circle will be complete.

Trump moves the US Embassy to Jerusalem even while selling record Arms to Saudi Arabia.

Maybe soon someone takes a pot shot at Trump, he survives and becomes the Anti-Christs envoy..........

This fiasco of Muellers goes on and on and on.

You Americans really should be marching on Washington in the hundreds of thousands and making your politicians accountable.


One of those chants, however, is what led Phillips and Marcus Frejo, a member of the Pawnee and Seminole tribes, to approach the youths.

It was a haka — a war dance of New Zealand’s indigenous Maori culture, made famous by the country’s national rugby team. Frejo, who is also known as Chief Quese Imc, told the AP in a phone interview that he felt the students were mocking the dance.


black dudes who I read are Muslims


They would have to pass legislation to control false information on our news too so people would get the whole truth.


For decades, a so-called anti-propaganda law prevented the U.S. government’s mammoth broadcasting arm from delivering programming to American audiences. But on July 2, that came silently to an end with the implementation of a new reform passed in January. The result: an unleashing of thousands of hours per week of government-funded radio and TV programs ...

No one in the press bothers to check anything out. They basically run with whatever narrative is best for their angle. In this case, the kids were white and Catholic/Christian. They went to a private school. They were from Kentucky (flyover alert!), and they had been at the icky March for Life. Then they all capped it off by wearing MAGA hats, the real cardinal sin the left cannot abide.

See? They had it coming.

So whatever else, every other group out there had to be a perfect victim group. We can't have black radical supremacists from a splinter cult, so they had to be black Muslims. After all, everyone knows there are a lot of black Muslims, and they aren't always the same as Middle Eastern Muslims, and everyone also knows Louis Farrakhan says some crazy stuff, but he still gets a pass.

So, they were black Muslims.


ategy, loaded with UN ideology. The government is lying to Tribes when it says this scam will restore tribal lands. It is putting land into government hands for future manipulation towards UN goals. It couldn’t be better stated in this Standing Rock Sioux Tribe agreement, “Consolidated interests are immediately transferred to Tribal governments and stay in trust for uses benefiting the tribes and their members.” What has the federal government ever done with fiduciary responsibilities for Tribes that is ethical? It was the Cobell lawsuit, filed because of fiduciary mismanagement, that created this land buyback program in the first place. And now Tribes are being deceived again. Your tax dollar, “awarded” to Tribes, then used by Tribes to buy land which goes into federal hands.

. gemstatepatriot.com...
All the kids did was be at a March for Life Rally. Let Divine Justice reign.

Perhaps, but the students were at a prearranged rendezvous point, had been at that location and endured verbal abuse for a length of time many adults I know would not be able to just let happen and responded in a much more mature fashion.

It's not like they could just go somewhere else to meet their bus for pick up. I suspect that even if they had decided to relocate that the agitators would likely have followed them and continued haranguing them no matter what merely because of MAGA hats, the mere wearing of which some in this thread are stating flat out means that they are bigots.

Never mind the actual racists who were shouting slurs at the kids.

Young Mr. Sandmann stood in the face of blatant provocation and responded with a smile letting Mr. Phillips know that he was not intimidated and people are taking that as a sign of disrespect.

I think he showed a poise many adults do not posses.

Isnt it funny how we keep hearing how the kids could have hgandled it better, when they were the best group nout of the bunch.

Why isnt there a conversation about how the ADULTS could have hadnled it better, by not approaching the kids and getting into their space, shouting racial attacks at trhem, and then lying about them in the press?

Nope, its just the kids who we need to focus on doing better.

“After meeting with local authorities, we have made the decision to cancel school and be closed on Tuesday, January 22, in order to ensure the safety of our students, faculty and staff,” reads a letter from school principal Robert Rowe, obtained by WXIX-TV, Fox19 in Cincinnati.

posted on Jan, 22 2019 @ 09:18 AM
link
a reply to: Grambler
Correct as usual Grambler!!! Cultural Marxism does exist. What needs to be done is some one should investigate the backgrounds of the journalists that are promoting this. An investigation damn near one like McCarthy did in the 1950's. My real fear is the next step for these leftists. Re-education camps?


HAHAHAHA
that is rich!
are the African Hebrew Israelites of Jerusalem democrats?
is the fake marine native american a democrat?


black dudes who I read are Muslims


They would have to pass legislation to control false information on our news too so people would get the whole truth.


For decades, a so-called anti-propaganda law prevented the U.S. government’s mammoth broadcasting arm from delivering programming to American audiences. But on July 2, that came silently to an end with the implementation of a new reform passed in January. The result: an unleashing of thousands of hours per week of government-funded radio and TV programs ...


Oh man, Obama passing that law sure took away our rights to get the truth about things from the press. I think that was a well thought out Democratic plan started by some control freaks in their party. How come Trump did not repeal that law?


Imagine being that brainwashed (or paid) that reality and facts are unacceptable to the magic unicorn movement.


You talking about whiney Trumptards on ATS? 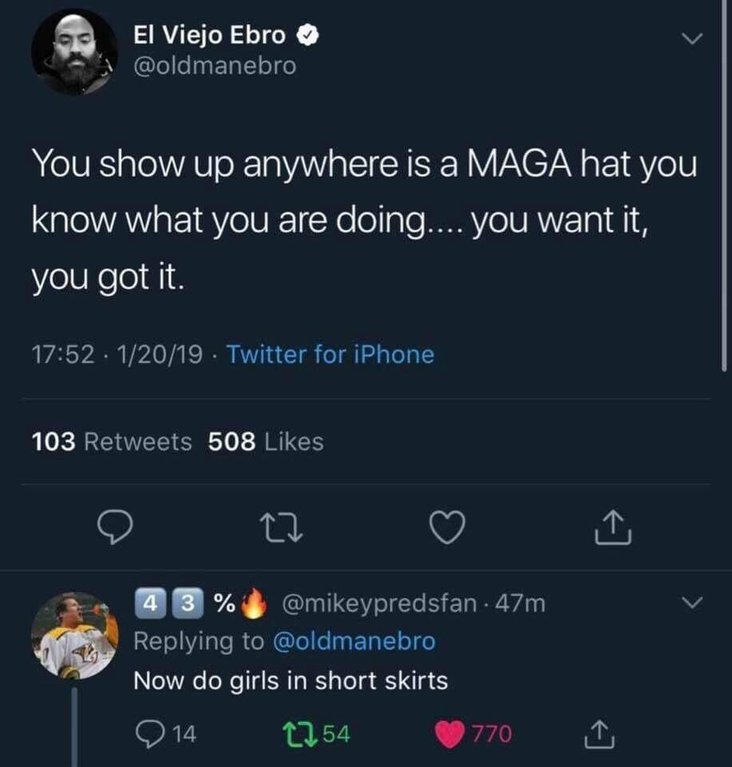 This is just one of many examples of this crap I've seen in the past 24 hours. It's pathetic that THIS silly episode is all it takes for people to show their true colors.

I have a big bald head, a fluffy beard, I don't smile for photos, and call myself bro. GRRRR, I'm bad!

What a putz. He'd have his # pushed in if he showed up in most places in America.

This is just one of many examples of this crap I've seen in the past 24 hours. It's pathetic that THIS silly episode is all it takes for people to show their true colors.

They are racist and political terrorists that say supporting the wrong candidate means you are to be beaten.

Imagine if large swaths fo people, some of which are well known enough to have blue check marks on twitter recommended violence against people for wearing Obama clothing.

we would have had 24/7 hysteria on how racism took over the country and how evil right wing people are.

Hell, we DO have that, and all we had to do is vote for the guy with the R by his name.

Alyssa Milano. What a moron. There's no telling how many people stopped paying 18¢ a day for abused animals because of her, or how many never even contemplated it because of her.

So you think you can just make this stuff up about the kids because you are on the side of Progressive ideals and you just somehow know the kids were the agitators here? I have news for you... conservatives are finally getting a backbone. It was the other way around the kids were the target.
edit on 22-1-2019 by ThirdEyeofHorus because: (no reason given)

Is she leaving the country? I ask because her bags are clearly packed in that photo. The years are brutalizing that woman's face, oof!

That's the look of the stress that comes with upholding liberal views. You can never be yourself because you're constantly walking on eggshells and looking for things to be offended by.

originally posted by: infolurker
So what are these kids guilty of? Smirking while wearing a red maga hat? What did this kid do to deserve death threats and what did this school do to deserve having Antifa thugs harassing them?

Serious questions? When watching the full videos of "the incident" what is the outrage other than a smirking kid?


The American Indian Movement Chapter of Indiana and Kentucky are planning a protest on Tuesday at Covington High School in Kentucky.
80 people have signed up to go harass the children some more at their Catholic school.

Video shows the children were not chanting, “Build the wall!” as Nathan reported.

The media isn’t interested in facts — they want to push their left wing agenda so they doxxed the high school kids.

The high school boy was doxxed by the liberal fascist mob.
The children have received death threats by violent leftists following this incident.

And on Tuesday local Indian group and Antifa are planning a protest at the school.

Child commits murder, trail as a youth with protections in place? Child wears a MAGA hat, crucify them.