Serious questions? When watching the full videos of "the incident" what is the outrage other than a smirking kid?


The American Indian Movement Chapter of Indiana and Kentucky are planning a protest on Tuesday at Covington High School in Kentucky.
80 people have signed up to go harass the children some more at their Catholic school.

Video shows the children were not chanting, “Build the wall!” as Nathan reported.

The media isn’t interested in facts — they want to push their left wing agenda so they doxxed the high school kids.

The high school boy was doxxed by the liberal fascist mob.
The children have received death threats by violent leftists following this incident.

And on Tuesday local Indian group and Antifa are planning a protest at the school.

If this is real, it’s absolutely disgusting

This is what the media wanted though

Fix the kids, harass them, threaten their parents, protest their school

All because they are white people who may like trump

It doesn’t matter the video evidence shows this was all a lie, and of the three groups involved the kids were the best behaved

cooperton
+19 more
posted on Jan, 21 2019 @ 01:18 PM
link
This is what happens when you're bored, and have no real problems in your life. You make up problems to make your self feel like you're doing something important. Meanwhile these kids are getting a clear picture of how deranged political extremism can be.


What Really Went Down Between Covington Catholic Students and Native American Protesters?
www.wibc.com... 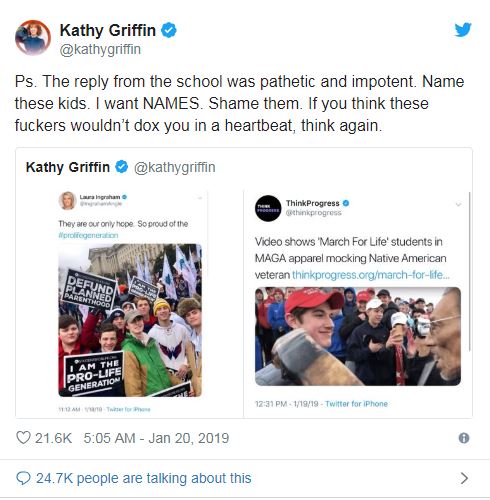 The butthurt runs deep. They're mad because their big viral video turned out to be a hoax. Because of that, those they tried to use in the hoax must PAY.

Ridiculous. Antifa and their company are disgusting.

ETA: They better not turn the other cheek. We're in a time where you don't hold back anymore, give those m-effers what they try to give you and stand strong.
edit on 21-1-2019 by LSU2018 because: (no reason given)

Middleoftheroad
+30 more
posted on Jan, 21 2019 @ 01:27 PM
link
Seems risky for Antifa and the Indian group. The parents of those children might show up armed. This isn't some sanctuary city on the coast with strict gun control.

Who needs facts when the sheep are happy suckling on the media's lies?


Devious little fascist aren't they. Trying to use the "indigenous peoples rights" to get the UN involved.

Wonder if old meth mouth will be there..

Perfect for a false flag event like Charlottesville.
edit on 21-1-2019 by seeker1963 because: (no reason given)

posted on Jan, 21 2019 @ 01:45 PM
link
Good. Good to see someone is finally standing up against douchebagness and bigotry.

roadgravel
+8 more
posted on Jan, 21 2019 @ 01:50 PM
link
They don't seem to be able to do anything worth while so they will settle for this misplaced protest.

Just to be clear, being white and Catholic makes you a douche bag bigot?

originally posted by: ErrorErrorError
Good. Good to see someone is finally standing up against douchebagness and bigotry.

Given your behavior on these threads saying anyone in a certain hat is a bigot who deserves this, I hope you never get the mob justice you prescribe to others

I thought the Blue Wave in November reduced their thirst for violence against Republicans.

posted on Jan, 21 2019 @ 01:56 PM
link
I kind of don't believe the story, but....
why go after these kids?? it was the stupid preachers that started the crap. at least that is what it seemed to me, although got to admit, didn't watch the whole video. the preachers just had to go and harass the native americans informing them that their beliefs were wrong. then they tried to turn the anger they stirred up on the other side.
sure the kids were kind of obnoxious towards the natives, and it would of been more respectful if the kid would have moved out of the elder's way instead of staring him down.
but, I would pin the instigators as being the preachers.
too bad people can't just live and let live!

I agree.
Which is why CNN has gone 180 and called out the racist black peeps who started it. As well as the boy Rep Steve Massie who said he is proud to Rep them.


originally posted by: ErrorErrorError
Good. Good to see someone is finally standing up against douchebagness and bigotry.

Given your behavior on these threads saying anyone in a certain hat is a bigot who deserves this, I hope you never get the mob justice you prescribe to others

Come on Grambler, be easy on him. Out of his 6 or 7 usernames, this is the one he puts on full throttle. Let him shill already!!

The whole thing built upon a lie via the MSM.

originally posted by: ErrorErrorError
Good. Good to see someone is finally standing up against douchebagness and bigotry.

The students are standing their ground against the indians and ANTIFAP?