posted on Jan, 20 2019 @ 12:19 PM
link
Over the past few months there have been quite a few number of threads pointing the finger at AB, on some threads Blizzard directly, on others ATVI and finally on some threads both! =)

I am not going to try and convince the people that have hate, frustration, negativity with this thread. I would much rather have people that are angry about something we have done because it means we can change your opinion vs people not talking about us at all.

A few people that know I work for Blizzard have asked me what it is like so I figured I would share my day to day experiences around that or working at Blizzcon. Im not a blind fanboy though I openly admit to having played DIablo for most of my life. Going on my interview was fun when I explained how I didnt play WoW but I was in a WorldWIde ranked raid guild and lead a casual raid in EQ2 .

To be clear I work in the ITIS department and I am based out of the Irvine Main Campus (IT location). Additionally the nature of my job means I work closely with and in some cases engineer solutions for both Blizzard and Activision.

Again have at it if someone wants to come and troll, I wont try and change your opinion any at this point as I would prefer that our deliverable's do that. We have a lot of angry people right now and nothing I say here is going to change that so I am not going to try.


MAIN CAMPUS
I will never forget my first day passing underneath the classic sign as a Blizzard employee. This is still one of the most surreal and exciting moments of a 24 year IT career. Once you get past that sign the next thing you see is the courtyard which is dominated by the orc statue and our core values. The entry way or lobby to each building typically has a large 8-12 foot statue of a character from one of our IP's. People on campus are creative, passionate and overall pretty friendly. Plenty of great and varied amenities all over campus as the idea is if your employees want to be at work then they should , in theory, work harder. Blizz def has the work hard and play hard mentality to it. You aren't going to make it here if you think you are going to just show up and play games all day unless that is your job of course. 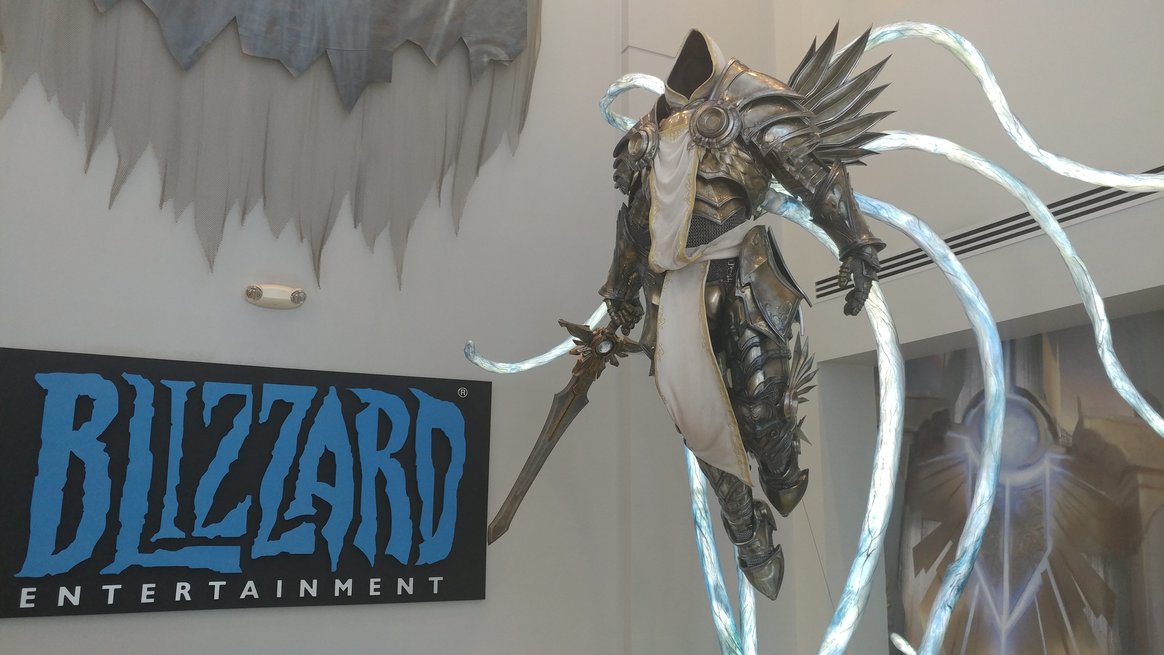 CAREER AWARDS
At 2 years you get a stein , at 5 years a sword, at 10 years a shield then onward to a ring and helm
Below is an example of the shield and sword in the hallway of one of the buildings. 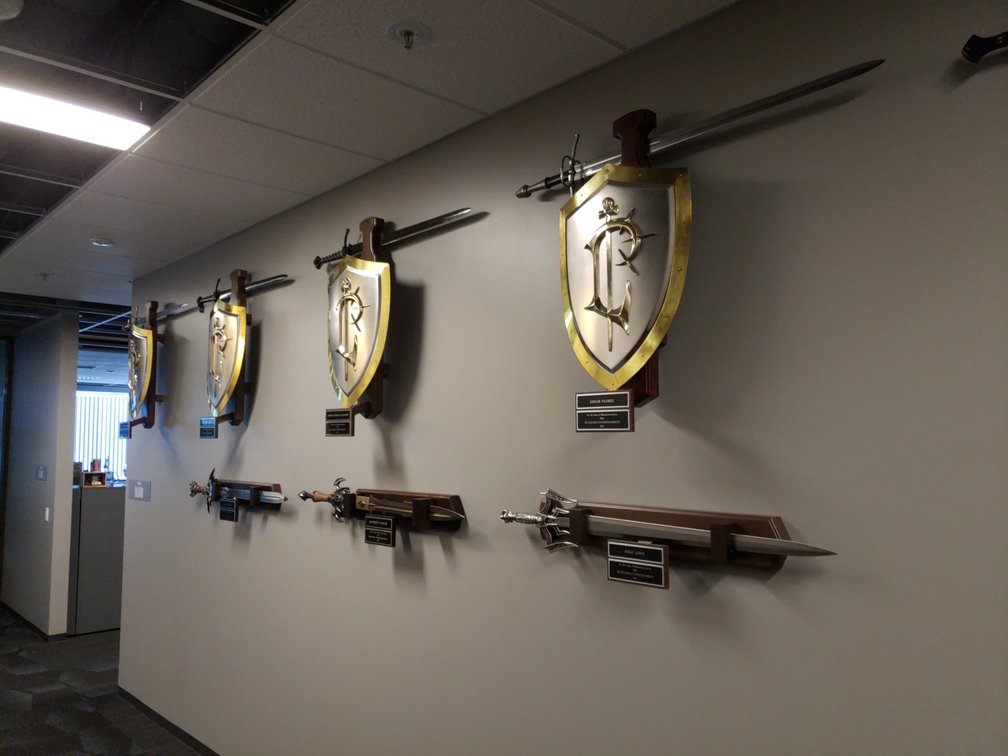 LAUNCH CELEBRATIONS
In late 2018 we launched our current WoW expansion which culminated with a celebration in the courtyard on Main Campus. This was a great time to get together with everyone and be excited for what was done and what is to come. 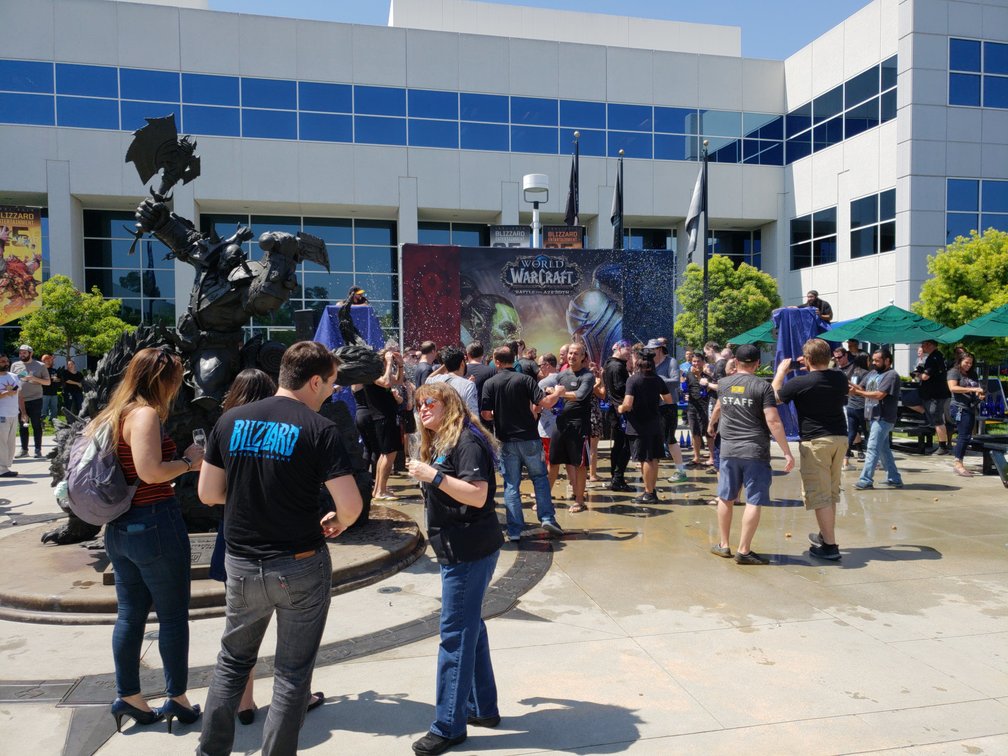 STATUES
Taken from my building this guy greets us every day and coupled with the logo in the background always makes it an exciting or fun day to come to work. Sorry for the washed out pic , was a sunny day and I didnt line this up correctly. 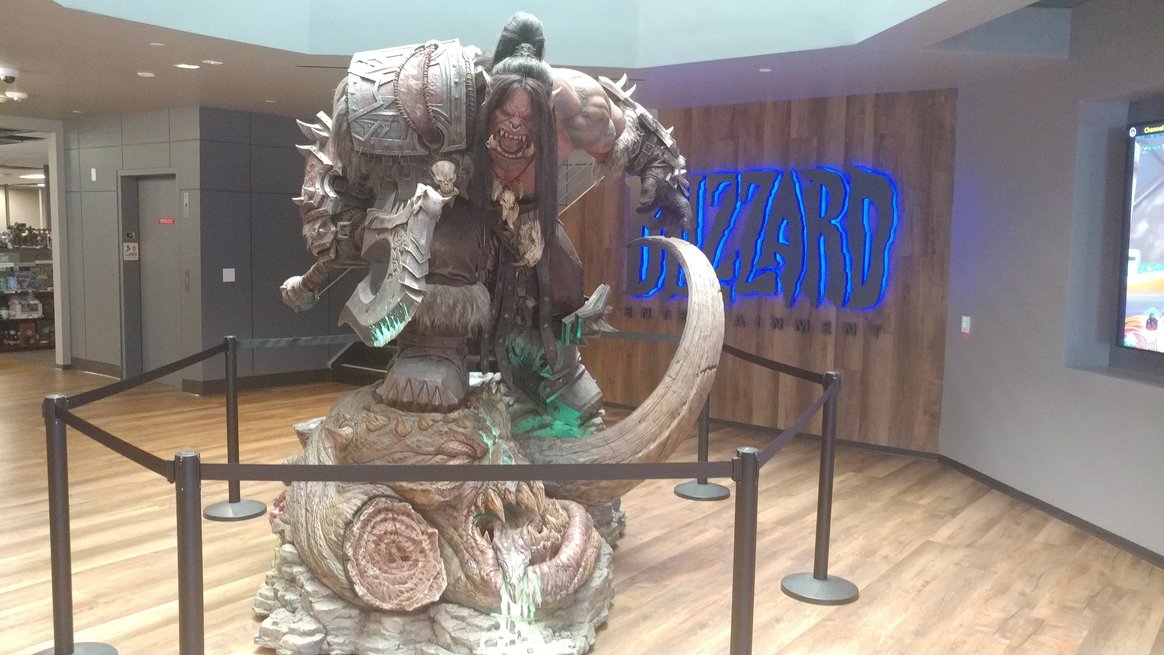 BLIZZCON
Worked my first Blizzcon this year and it was damn fulfilling. It was a very long day when I had my shift, after opening keynote and Immortal announcement chaos, and I was controlling the lines in a section of the merch store. I was on my feet for about 8 hours with a few breaks. For Blizzcon it doesn't matter if you are an artist, producer, HR or in IT everyone does their part and typically not in a role you normally do. This gave me a great chance to interact with our community. I got a few snide remarks but I would say 95% of that day was fans or players asking me what it is like to work here, if I wanted a drink or how how tired were my feet.

This was a cool moment for me as it was taken during the Overwatch tournament where you had teams from all over the world playing the game in front of a thousands of fans. 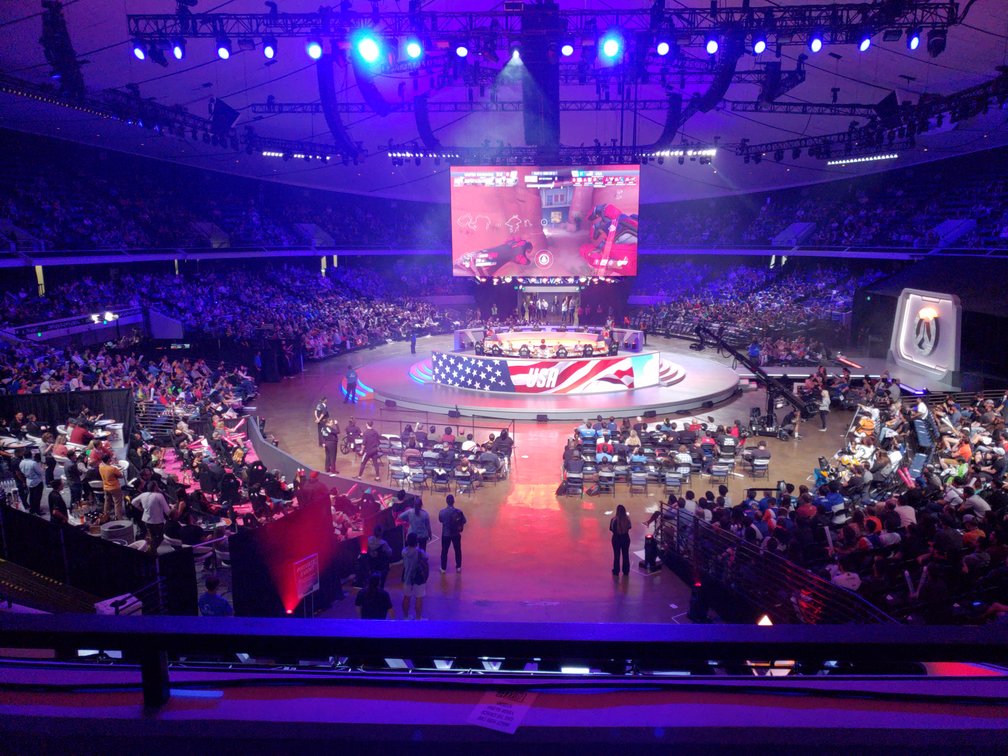 CLOSING
I have done my specific part of IT in just about every vertical, healtchare to defense industry to CRM to sales. This current chapter in my adventure is the most fun and exciting yet. I get to talk to and plan solutions for studios that have and continue to build games that i have played for many years. I have yet to meet an employee that isn't passionate and isn't afraid to speak their mind. When the new leader of Blizzard is hugging a long time employee at Blizzard because they just ranted about their concerns then you know that from top to bottom people ultimately care about the legacy we have. Plenty of things were done wrong, we know that and plenty of things will be done wrong in the future but none of that changes my opinion that as an employee this is an amazing, fun, rewarding place to work.

But.. but.. why move diablo to a mobile platform against all PC gamer's wishes? This goes against everything, EVERYTHING.


That does seem like a fun job and all. But WOW ruined everything man.
Warcraft was such a fun game, but now if I even bring up that game people just think I'm talking about WOW.
It's super annoying and really erks me to this day.

But in respect for the old I still retain me original copy of Warcraft and the original Diablo for PS1. Mint condition and all!


You played diablo on a console? Blasphemy!

I am a gamer, and have been for 30 plus years. You have a cool job! I don't play Wow, or Dioblo, but I could get into them, if I had more time.

I have Xbox One X, and it now has full keyboard and mouse support, maybe it would be worth checking them out now.


You played diablo on a console? Blasphemy!


I know I was committing a crime at that time!
But it was alot of fun using a controller to play with my buds.
I did get the chance to play Starcraft on the 64 but if I remember correctly the integration was complete crap.
Starcraft should never be played with a controller nor should Warcraft(even though I own one for the ps1).
Diablo worked fine though.
Sorry I am a controller whore lol
BigdaveAR gives me crap all the time.

Living the dream, that is awesome. Do you have insider information? Can you share things? Will they ever merge servers in DDO to address the player population implosion or is that game pretty much dead?

posted on Jan, 20 2019 @ 01:06 PM
link
ive known a few blizzard employees and every last one of them only has good things to say even the ones who were there long enough to get their sword and board. many no longer work there and have moved onto new things but they all enjoyed their time working for the company.

posted on Jan, 20 2019 @ 01:06 PM
link
I've heard opinions that the recent troubles are mostly an Activision issue, and that Blizzard was mostly kept insulated from it by the guy in charge, but that he recently left and now Activision has started to seep into Blizzard making it less like it used to be and more like Activision which is trouble for both product and employees.

This isn't exclusive to Activision/Blizzard though. This is the kind of rot that has been funneling through AAA developers for a while.

Very low expectations now that Activision is at the helm.

posted on Jan, 20 2019 @ 01:20 PM
link
Thank you for posting this!
I’ve wondered for a long time what it would be like to work at Blizzard. Considering I have a slight addiction to WoW and Diablo...

Like I said, I'm not going to agree or disagree with what people are saying here. Nothing I say is going to change anyone's opinions. In life nothing succeeds or fails for one reason, you need the perfect storm to land on either side of the ledger.

The only thing I will agree with TheScale said, as an employee it's a pretty damn awesome place to work.

I'll post a video of the Holiday gift we received which is typically Blizzard in it's coolness. 😁

I dunno if it's something to be proud of. Blizzard fell hard and deserve to be loathed with their obsession with microtransactions.

Big hater of your company with everything brought out after Lord of destruction. Perhaps you can talk some sense into the money obsessed, morals lacking cronies you work for.

posted on Jan, 20 2019 @ 01:23 PM
link
I like that tower defences and games like league were pretty much created by blizzards game editors.

The original dota on WC3 was cool for it’s time.

Cool so you are easily bought with gifts. Good to know.

Dark Alliance 3 rocked!! ... Also Champions of Norrath and Champions Return to Arms were almost as good. If they would have kept the original game engine and just leased more content/dungeons, I would buy them all and play through multiple times.

Cool so you are easily bought with gifts. Good to know.

You are welcome to your opinion.

A few people on ATS that know I work here asked me what it is like so I decided to be a good virtual friend to them and post about it. Feel free to rip me, Blizzard or any combination of the above as it doesn't change anything I posted.

As a budding dev myself I wish you all the best.

But Going to mobile? honestly your employees have lost base, i'm not doubting your talents but you must know your employers have a lot fans feathers ruffled.

As a gamer for thirty years I don't understand. The Diablo 3 port to consoles was great-the couch co-op was great. I'd pay good money to play the new Starcraft series on modern consoles-Starcraft 64 did despite the hardware limitations (not your fault) but they can prove it can be done, and future console ports should be taken into consideration, or possibly even making console games. I know how hard it is, trust me, I've spent hours upon hours making elder scrolls mods. I appreciate your effort and I hope you reach out.

But still...Diablo 4-tell your bosses to make it happen.
edit on 20-1-2019 by Thecakeisalie because: (no reason given)