AOC Wants To Raise Taxes On The Rich — And Americans Agree

Sorry for the shortening of the name, thread title's don't like to be very long.

Freshman Rep. Alexandria Ocasio-Cortez recently captured headlines in her “60 Minutes” interview when she said the U.S. should raise taxes on a portion of the income made by America’s top earners; the idea is that once a person had made at least $10 million in a single year, every dollar coming in after that would be taxed at a rate of up to 70 percent.

I've argued many times that this isn't a crazy, radical idea and it's been upwards of 90% in the past.

A new poll from The Hill and Harris X found that 59 percent of registered voters supported imposing a 70 percent tax rate on every dollar over the 10 millionth a person earns in a year. (Tax rates that apply only to income over a certain threshold are called marginal tax rates.) The idea even received bipartisan support: 71 percent of Democrats, 60 percent of independents and 45 percent of Republicans said they were in favor.

The really important bit in there is fact that we're all taxed at a marginal rate.


This is the "inch" given to socialism before they take their "mile".

posted on Jan, 19 2019 @ 12:18 PM
link
That's because the majority of Americans do not pay taxes. They pay into SSI but get any income tax back at the end of the year in the form of the refund. Those Americans who pay into SSI and pay income tax through out the year and dont get a refund but instead must write an additional check on April 15th are less likely to agree with a raise in taxes


I've argued many times that this isn't a crazy, radical idea and it's been upwards of 90% in the past.

The differences between the "haves" and "have-nots" is financial know-how and investment.

You do NOT need a lot of money to invest. 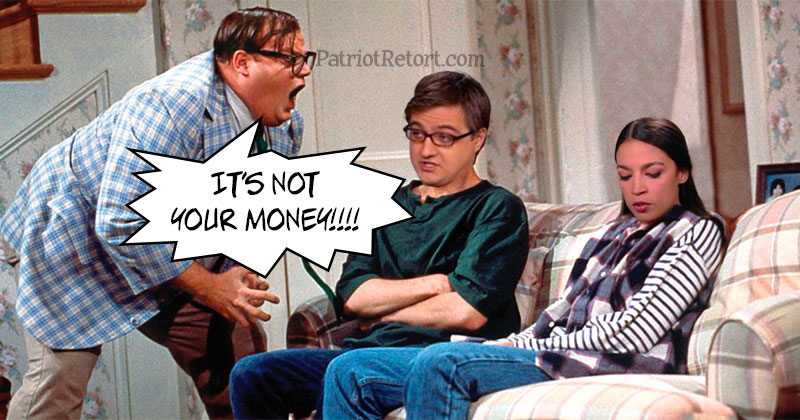 You can justify raising taxes when you can show that the current spending is done wisely and prudently.

originally posted by: DJMSN
That's because the majority of Americans do not pay taxes. They pay into SSI but get any income tax back at the end of the year in the form of the refund. Those Americans who pay into SSI and pay income tax through out the year and dont get a refund but instead must write an additional check on April 15th are less likely to agree with a raise in taxes

When a woman on welfare with three kids knows that she only needs to make a small amount a year to qualify for earned income credit it just incentivizes living on welfare.

So you get free food, free housing, subsidized utilities, free phone, a check for fuel and stuff as a base. Then you know that if you get a part time job, make a little over say 7k in a year then you are eligible for earned income credit.

ALL of which the people actually paying taxes are paying for.

No... what we really need is a flat tax, no deductions, no credits.

Then let's see what percent of America wants EVERYONE's taxes raised to.

Until then it's just all social warfare.

Yet this historical narrative is both simplistic and wrong. It relies upon a confusion between the statutory tax rate (i.e., the number that’s on the statute books) and the effective tax rate (i.e., the percentage of income that people actually pay once exemptions, deductions, and other tax-code incentives are accounted for).


No, it most certainly did not.

I agree. We might bring in more for a year or so but then so many deductions and loopholes will get created, we'll be right back to where we were before.

Oh the poor super elite! What can we do to continue helping them?!

Her plan is simple, if you make MORE than 10 million a year, everything AFTER that will be taxed 60-70%. Fox News likes to push 90% to scare the American people who will never make that kind of money in order to protect the wealthy elite. And Fox News viewers, are once again, fools for buying into Fox News propaganda.


Are you trying to say that these projects weren't funded by tax dollars?

The Interstate Highway System is a system of freeways in the United States. It was first designed by Dwight D. Eisenhower in the 1950s. The Federal Aid Highway Act of 1956 was used to pay for construction.[1] It was mostly built from the 1950s through the 1980s. But more freeways were built later. It is now about 47,000 miles long.


tThe Federal-Aid Highway Act of 1956, popularly known as the National Interstate and Defense Highways Act (Public Law 84-627), was enacted on June 29, 1956, when President Dwight D. Eisenhower signed the bill into law. With an original authorization of $25 billion for the construction of 41,000 miles (66,000 km) of the Interstate Highway System supposedly over a 10-year period, it was the largest public works project in American history through that time

Oh well, I'll just fork it over so gov't can buy another $5,000 toilet seat, or give it to some politician's brother-in-law in a grant to study cow farts or homosexuality in shrimp.

posted on Jan, 19 2019 @ 01:17 PM
link
That tax rate would just drive all the top earners out of the country. Who happen to already absorb most of Americas tax burden. Perfect way to turn America into a 3rd world nation.

It's not the tax rate that's the problem. It's allocation of said taxes. If the average American was aware their taxes are only paying the interest on our debt they would disagree whole heartedly with Cortez.
edit on 19-1-2019 by JAY1980 because: (no reason given)


Out of those 10,000.... how many do you think earned that money as fully taxable income and NOT capital gains income?


2nd thing to consider... you increase "Taxable Income Brackets" you screw EVERYONE when it is time to retire on that 401K


So, maybe some of you are catching on.... the REAL plan is to get to us middle class people to increase our rates and get OUR retirement because that is where the REAL money is in bulk.

Last I looked there was over 24 TRILLION dollars in retirement holdings that the Democrats want to increase taxes on. That 10 million income tax is nothing compare to taxing the crap out of us on that retirement money. They cannot wait to get their claws into it.

That is the real goal.

This is the money they want to raise taxes on or confiscate to fund their Social Security 2 plan.
401kspecialistmag.com...

The report also found that Americans held $6.8 trillion in all employer-based DC retirement plans on March 31, of which $4.8 trillion was held in 401(k) plans.

posted on Jan, 19 2019 @ 01:39 PM
link
I've said it before, don't let a bartender make tax law.
The United States collects more tax money by far than any other country in the world.
Maybe this clown should figure out how to stop spending 40% more money than we have.
This proposed tax increase would be like bailing out the titanic with a bucket.

You should really read your own sources:


An act to amend and supplement the Federal Aid Road Act approved July 11, 1916, to authorize appropriations for continuing the construction of highways; to amend the Internal Revenue Code of 1954 to provide additional revenue from taxes on motor fuel, tires, and trucks and buses; and for other purposes.

One tax does not equal another.

You said that the 90% marginal tax on income did the following:

No, it most certainly did not.

Any questions?
edit on 19 1 19 by projectvxn because: (no reason given)

You lost all credibility with your 'Pelosi represent the troops and a third of the nation' nonsense. Anybody with any sense was laughing so hard they cried. Abandon this nick and start over.

AOC is not only crazy, but also stupid and completely without any understanding of economics. Anyone that voted for her needs a psych consult.

posted on Jan, 19 2019 @ 02:09 PM
link
The problem with this kind of thinking is that the rich will just move somewhere that has a better tax rate.

A lot of countries would love to have some American millionaires become part of their nation.

Rich people can also hire accountants to get around paying extreme tax rate and or come up with investments that will shield their incomes.