Where and How Should President Trump Deliver the 2019 State-of-the-Union Address.

The Speaker of U.S. House of Representatives, Nancy Pelosi (D-CA), is strongly urging President Donald Trump (R-Prez) to NOT deliver the 2019 SOTU address, while the U.S. Government is partially shut-down.

“The state of the union is off,” Hoyer said in an interview with CNN, adding that Trump could not convince them to schedule it, until Trump reopened the government.

Steny Hoyer is 100% Delusional if he believes that HE can CANCEL the President's 2019 State-of-the-Union address.

And Nancy Pelosi's unspoken reason for not wanting the President to deliver the SOTU in the U.S. House chamber is two-fold: 1.) She would be behind Donald Trump and on-camera the entire time, while he lays out his record-breaking accomplishments for America/Americans, and bashes Democrats for not helping. 2.) Everyone on the planet would see her constantly adjusting her false teeth..for at least 60 grueling minutes.

Since the State-of-the-Union address is the PRESIDENT's TO GIVE, if the majority party of the U.S. House does not want the President of the United States of America delivering a speech on their premises...he can deliver it in another manner, or location, or even at a later time.

If YOU want President Trump to deliver the State of the Union address, do you think he should ignore Pelosi/Hoyer and speak in the U.S. House Chamber on Tuesday, January 29, 2019? (Can he legally do that?)

Or, do you want the President to utilize another venue, or method?

Or, do you think he should delay delivering it until the U.S. government is 100% re-opened?

Personally, I want to see Pelosi sitting behind the President, making faces, and looking dour. And, I want America to see how none of the Democrats applaud/clap, when Donald Trump touts accomplishments that millions of Americans are enjoying in our lives every day.

In a carriage on the hyperloop, travelling at 700 miles an hour, with jugglers and other clowns.

and he needs to scowl and say "You're fired" a few times, for the laughs.

edit on 18/1/2019 by chr0naut because: It would be far more entertaining and wouldn't loose any of its relevance.

I'm not sure how this whole thing works, but couldn't Trump just deliver the speech from the White House if he wanted to?

He won't cancel the SOTU because of a few Dems pouting. In fact, the Pelosi comment may have even inspired Trump to alter the speech a bit more in her direction.

But the idea of a SOTU rally open to the public is awesome. He could deliver it a major arena and the house would be packed. 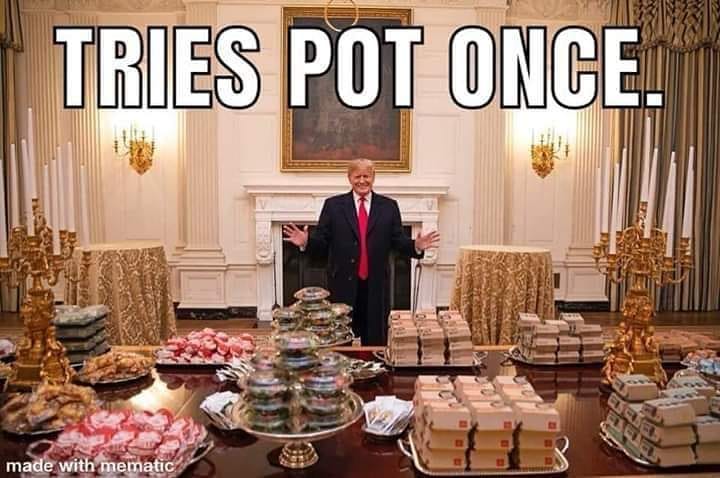 I think he should livestream it on "the gram".

where : teh white house lawn

how : the medium of interprative dance

posted on Jan, 18 2019 @ 05:21 AM
link
If Trump gave into Pelosi’s idea of no SOTU during the shutdown, the shutdown would continue another two years.

originally posted by: Nickn3
If Trump gave into Pelosi’s idea of no SOTU during the shutdown, the shutdown would continue another two years.


Oh, can it? Pretty please?

Let's get a statement in place where I get back all the federal taxes I paid for every day it was shut down, then make sure it never opens again.

originally posted by: lakenheath24
a reply to: carewemust

HA! i am picturing right now. "ladies and gentleman, members of the senate, it is a privilege covfefe"

I reckon he should do it at the superbowl halftime show, There would be no better way to maximize his coverage, let's just hope he doesn't go Janet Jackson and show a little too much flesh.
edit on 18-1-2019 by Thecakeisalie because: (no reason given)

He should deliver it from the white house... from inside a closet.... with the lights out... in American sign language.
Thats how much I care to hear what he has to say.

Ha ha He cant ignore Pelosi and speak at the house without her say so....
Ut oh he's not god after all.... Nancy is...LOL.

In a room with a bright light

One thousand cold hamburgers and not a drink in sight.... Or a french fry...

I like your idea. Let's add that if the government is shut down then nobody gets a check.

I am sure the shutdown time would be very short if their checks were being held as well as the workers.

Does triggered mean Im laughing my ass off?

Does triggered mean Im laughing my ass off?

Of course not. It means all the rest of us find great humor in the ignorance and "triggerdness" of some individuals