posted on Jan, 8 2019 @ 02:56 PM
link
Why wasn't Democratic Congressman Hank Johnson’s Atlanta NAACP speech rebuked on MSM? Have you seen it? It's a doozy. He not only calls Trump racist and compares him to Hitler, but also mentions that Trump supporters "are dying from alcoholism, drug overdoses, liver disease or simply a broken heart caused by economic despair." Well, I guess that explains why I'm so depressed and why MSM didn't touch this story... because most of the biased journalists and commentators on MSM probably feel the same way towards Trump and his army of "deplorable" supporters. Can you imagine the fallout on MSM, if a Republican Congressman delivered a speech that described Democratic voters in such a way?

One "freshman" Congressman, who I'm starting to really admire, is former Navy SEAL, Texas Republican Dan Crenshaw. He had plenty to say about Johnson's offensive speech.

Unlike the Liberal medias "darling," publicity monger, Alexandria Ocasio-Cortez, Dan Crenshaw is unpretentious, intelligent and comes across as a sincere man. He called out Hank Johnson for being a fool:

“But you went on to insult, degrade and demean tens of millions of Americans who voted for him. To call them drug-addicted, uneducated and unhappy alcoholics — this is a cowardly form of politics."

“These people are exercising their right and their voice the only way they can, which is through their vote,” he continued.

“They have a vote. And you use your public platform to insult and demean them. This is not the behavior we expect from a member of Congress."

“So I’ll leave you with this: Pick on somebody your own size,” he concluded. “Pick on me if you’d like. My office will be right down the hall from yours. I’ll see you in Washington.”

posted on Jan, 8 2019 @ 02:59 PM
link
At least he isn't worried that too many of them on the right side of the country could cause it to capsize and tip over.

Haha I was wondering if it was the same guy, man I still can’t believe he said that. Then he has the balls to call someone else uneducated? Some people have no shame.

That's not very nice of him.

I know someone who isn't getting a Christmas card.


He speaks of racism, bigotry, lack of education, drug addicts... Man... Does this fool really know that racism and bigotry in today's world is due to certain ways being pushed on another? He sounds much more racist than any Trumpers than I've ever met. Lack of education... Drugs?

But my question is, is the island gonna capsize. How is this idiot still in office

Got a lot of nerve calling others uneducated.

Nothin' like punchin' below your weight-class there Rep. Johnson. Well done!

You put 'em in their place. Was the applause that that undoubtedly garnered worth demeaning half of America, including a good number of black americans, some of whom might have voted for you??

I wonder, has Guam capsized yet??

originally posted by: DBCowboy
he nailed it!

posted on Jan, 8 2019 @ 03:23 PM
link
Geeze. I wonder what the democrats are reading and getting stoned on?
edit on 1 8 2019 by Shockerking because: because: Had to change my wording up a bit to make it more understandable, sorry. 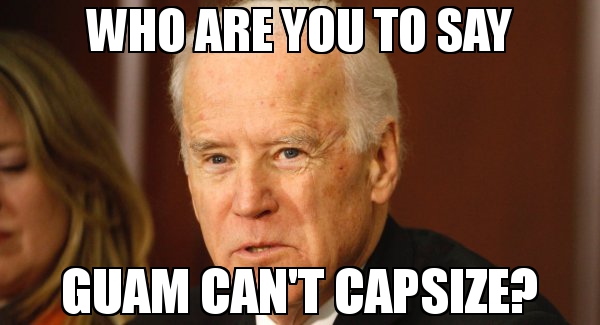 THAT HAPPENED! He literally said that. He honestly believed that. And NOBODY sitting there at the time called him on it and said “you’re fired”.

The fact democrats vote for and support a (quite literally, in every sense of the word) ‘MORON’ like this ‘total idiot’ says a lot about them.

The second he revealed how astoundingly stupid and thick he was that day, he should have been fired.

“Guam could capsize if too many people stand on it at the same time”.


( joins in with opening chords of Foggy Mountain Breakdown and passes a chaw of tabakker. )
edit on 8-1-2019 by DAVID64 because: (no reason given)

WOW! He appears to be on pills, or some other substance. What a tweek
He thinks Guam might tip over and capsize? What kind of dope makes him think like that?


Dan is awesome. I will be watching him. It is good to have a guy like Dan stick up for blue collar Americans. He has our back, and I appreciate that