I would venture to say that all human beings have a somewhat complicated relationship with truth. I mean, sure, we all SAY we want the truth, that we are truthful (to others and ourselves), but let's be honest... sometimes the truth HURTS. Sometimes it's deadly. Sometimes the truth is so horrifically ugly that we are forced to look away. We cherry pick for the truths that fit our worldview or "win" our argument.

Sometimes we prefer the lie dressed in truth's garb. And sometimes we cover the truth with lies.
Check out this interesting allegory from the 19th century regarding truth and lies.

The Naked Truth and the Lie 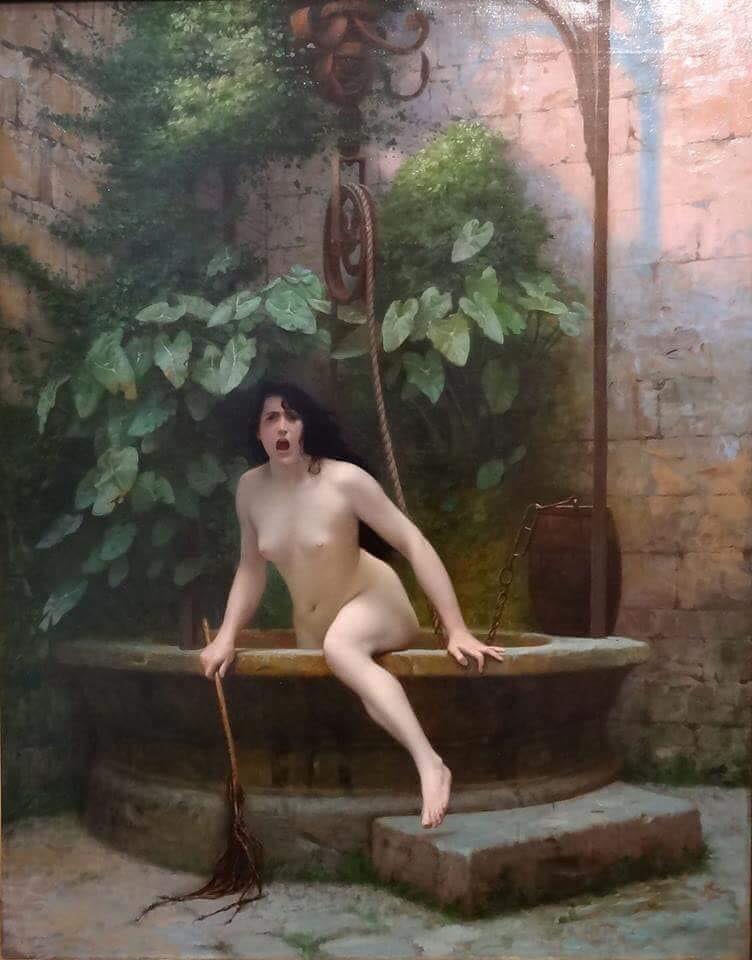 Painting: Truth Coming Out of Her Well -- Jean-Léon Gérôme


The Truth and the Lie meet on the road one day. The Lie says to the Truth: “It’s a marvellous day today”! The Truth looks up to the skies and sighs, for the day was really beautiful.

They walk together for a while, until they reached a beautiful well. The Lie tells the Truth: “The water in the well is very nice, let’s take a swim together!” The Truth, once again suspicious, tests the water and discovers that it indeed, is very nice.

They undress and start the bathe. Suddenly, the Lie jumps out of the well, puts on the clothes of the Truth and runs off towards a nearby village. The furious Truth leaps out of the well and runs to find the Lie and get her clothes back. The Villagers, seeing the Naked Truth, are horrified and look away with contempt and rage.

The poor Truth returned to the well and disappeared, forever, hiding her shame. And since that day, the Lie travels the world, clothed as The Truth.

I found this excellent blog which provided an update, or an alternate ending to the tale. I'll post the author's work here and then add my own ending.
storytelling.co.za...


Epilogue : The naked Lie and the Truth. 2018 versions & timelines
The original Naked Truth and Lie story comes from the 19th Century and here we are 200 years later, in a world of multiverses, the possibility that we’re living in a simulation, the concept of multiple timelines, the Mandela Effect and Apotheum. So it makes sense to explore further where the original story might have moved to, as all the characters were set in place at the end. The Truth in the well and the Lie is travelling the world in her garb.

Setup: The naked Truth dwells in the well, ashamed at how she was seen and treated by the villagers. But 200 years is a long time to dwell in a well for anything, especially the truth. Surely the truth has a purpose? Hiding in a well isn’t really meaningful and there’s not much entertainment down here, reflected the truth. Maybe, she thought, an upwelling is necessary. Because the Lie has traveled the world so long in my garments now everyone has come to believe that it is I who am the liar. And anyway, it’s so rude of the lie as it should know by now that it couldn’t exist without me, though the truth.

TimeLine1: Truth realises that the Lie has left it’s garments behind next to the well. The truth knows that in order not to be hated, the only way she can be accepted by the village and the world is to be covered in the garb of the Lie. And to this day, the Truth and the Lie have been indistinguishable to all except those who have seen them unclothed.

TimeLine2: The Truth stays in the well. Sometimes people come to sit by the well knowing that the Truth is in there. If they’re really sincere, the truth will out and talk with them. They’re OK with seeing her naked and she’s OK since they don’t hate her. Many seekers come looking for The Truth but she sonly sees them one at a time because The Truth is a very personal experience.

TimeLine3: Truth searches and finds the web pages, twitter and instagram accounts that plainly showed the lie had infected most everyone. There are literally hundreds of billions and billions of lies. Lies everywhere. But from time to time, truth finds allies – they Love the Truth and have created so many stories about her but none of these are trending and, in fact, many of them are being deleted and downvoted and ignored. The truth suddenly, with a great sigh realised that there is a war being conducted on her by the one who took her garments; the Lie himself.

In my version, as there is no shame in truth, Truth bodly ventures out naked, alone. She lives the life of a prophet, a wanderer, at times accepted and followed briefly but almost inevitably fiercy and violently rejected, beaten, expelled by even her most devout. Some seek her out and find beauty in her bold and shameless bearing, while others enjoy seeing her in her degraded form. She has found that she would rather be naked and bold than clothed and demure, and knows that her brambled and dangerous path only enables the most devout to follow.

Thank you for reading, friends! I'd love to hear your version of the tale
I hope you have a wonderful day.
edit on 3-1-2019 by zosimov because: (no reason given)
edit on 1.3.2019 by Kandinsky because: fixed minor typo. Happy New Year.

posted on Jan, 3 2019 @ 11:02 AM
link
"The names of earthly things are illusory. We stray from the real to the unreal. If you hear the word “god,” you miss the real and hear the unreal. Father, son, holy spirit, life, light, resurrection, church. These words are not real. They are unreal but refer to the real, and are heard in the world. They fool us. If those names were in the eternal realm, they would never be heard on earth. They were not assigned to us here. Their end dwells in the eternal realm."

I don't know if it helps to personify truth, isn't that like lying about truth?
What is true to you is not true to others. It's one of those things impossible to define in any meaningful way. Mostly "true" is just what's commonly agreed upon and that is never the full story.

It's just an allegory so that the metaphysical could be more tangible.

I don't see truth as subjective, though. I do see it as sometimes really hard to distinguish or find.

Although I would agree with you in that most of us conflate truth with opinion, most of the time.

Give me one example of an objective truth? You'd have to give a ton of details to make it objective or my brain immediately turns it subjective.

These are some truths which are hard for me to deny:

*I am a sentient, reflexive being (I can talk to myself, touch myself, manipulate myself, harm myself or heal myself).

*I can manipulate objects or beings against their will. (Pick up a dog, tear a leaf off a tree, type this message to you).

*I can be manipulated against my will (picked up by a bigger or stronger force, attacked by cancer cells).

*My actions can cause real damage to myself or others.

*My actions can fix broken things or heal others.

Okay, but you worded it very precise. You won

I absolutely admire your mind Peeple and always like reading your comments.

Thanks for adding to the discussion!

She lives the life of a prophet, a wanderer, at times accepted and followed briefly but almost inevitably fiercy and violently regected, beaten, expelled by even her most devout.

Noooo, I hate making such glaring spelling errors! Regected... lol. Maybe that was a purposeful mashup of rejected and neglected

posted on Jan, 3 2019 @ 02:13 PM
link
I have a writing reference manual titled "The Art and Craft of Storytelling" by Nancy Lamb. Each chapter begins with a quote from an author. One chapter features a Mark Twainism: When you catch an adjective, kill it.

I see the value in developing one's command of verbs, but I have a difficult time wrapping my mind around the prejudice against adjectives. Maybe someone smarter will come along and school me.

But anyways, I say this mainly because your choice of the word "brambled" leapt off the page (as it were). When I think of it, it's a perfectly natural way to describe a path, and I like it. I don't want to "kill" the word "brambled", even though my auto-correct, with its unquestioning loyalty for (what it regards as) truth (manifested in snobby, dotted red lines), clearly "thinks" differently.

It's subtle, but ineluctable: "Truth" is an abstract noun. You can't touch truth, or taste it, but I admit that it seems no less real to us, like God. Maybe I can get away with saying it is an extraction. But from what is it extracted? Inquiry. (A verb. An action.) Without the initial action of inquiry, POOF goes the notion of both truth and lies.

But wait. Let's put the key back on the kite string and continue inquiring. (ZAP truth and lies reappear.) OK. It's readily observable that "the output depends upon the input". In other words, the quality of the inquiry determines the quality of the truth. Multiply this along all lines of inquiry and all possible resultant observations, and it's clear why people say that the truth is subjective. Perhaps, if there is one Truth paramount to all, it is that humans are designed to inquire.
edit on 3/1/2019 by DictionaryOfExcuses because: (no reason given)

posted on Jan, 3 2019 @ 02:22 PM
link
One of the problems besetting modern man are the ideas that there is only objective truth or that all truth is subjective. Truth is, to coin a phrase, both are applicable. The real problem is when one group states that all truth is objective and all else is mere opinion. While there are objective truths - water is wet, I was born in America - there is such a beast as a subjective truth. A good example is my beliefs on pacifism. For me, taking a life or injuring another is morally wrong. To say that that is a mere opinion is, a certain sense, to devalue that is which is true to me (subjective). Opinion, then, falls into a more nebulous category. I may say Babylon 5 is the greatest television show in the history of ever, but that's not even true for me, as that view could, and indeed has, change over time. Yet some would argue my previous argument - in regards to my pacifism - would then be a transitory opinion. This is why I claim opinion and subjective truth are more difficult to categorize. One is based on moods, whim, and varying standards whilst the other is based on deep conviction. Sorry if this is a confusing ramble, hope I was at least clear enough to be understandable.