posted on Dec, 19 2018 @ 11:31 AM
link
Close on two years ago I posted a thread entitled, "Can Artificial Intelligence Predict Earthquakes?," and we are now at the point of where that research is showing results.

Los Alamos National Laboratory researchers applied machine learning to analyze Cascadia data and discovered the megathrust broadcasts a constant tremor, a fingerprint of the fault's displacement. More importantly, they found a direct parallel between the loudness of the fault's acoustic signal and its physical changes. Cascadia's groans, previously discounted as meaningless noise, foretold its fragility.

"Cascadia's behavior was buried in the data. Until machine learning revealed precise patterns, we all discarded the continuous signal as noise, but it was full of rich information. We discovered a highly predictable sound pattern that indicates slippage and fault failure," said Los Alamos scientist Paul Johnson. "We also found a precise link between the fragility of the fault and the signal's strength, which can help us more accurately predict a megaquake."

This shows us that even with all of the advances we have made in science, there is room for much much more and that new technologies (AI/machine learning in this case) can be applied to existing research and show new areas in which we were blind. The signal that scientists had discarded as noise was in fact important in regards to what a fault system is doing prior to a rupture.

From the abstract of one of the papers mentioned in the phys-org article:

Acoustic signals generated in the early stages of impending fast laboratory earthquakes are systematically larger than those for slow slip events. Here, we show that a broad range of stick–slip and creep–slip modes of failure can be predicted and share common mechanisms, which suggests that catastrophic earthquake failure may be preceded by an organized, potentially forecastable, set of processes.

Similarity of fast and slow earthquakes illuminated by machine learning

I wonder if it is these acoustic signals, as mentioned in the excerpt above, that animals are detecting prior to earthquakes in some circumstances? Might these precusor movements also account for the appearance of earthquake lights that have been reported in some instances?

Now specifically with regard to the Cascadian seismic zone, here is a bit from the abstract to the other paper referenced:

Here we show that the Cascadia subduction zone is apparently continuously broadcasting a low-amplitude, tremor-like signal that precisely informs of the fault displacement rate throughout the slow slip cycle. Using a method based on machine learning previously developed in the laboratory, we analysed large amounts of raw seismic data from Vancouver Island to separate this signal from the background seismic noise. We posit that this provides indirect real-time access to fault physics on the down-dip portion of the megathrust, and thus may prove useful in determining if and how a slow slip may couple to or evolve into a major earthquake.

This research could lead to incredibly valuable savings of time and money to people in the potential area of affect by a mega-thrust quake we know that fault system is capable of. 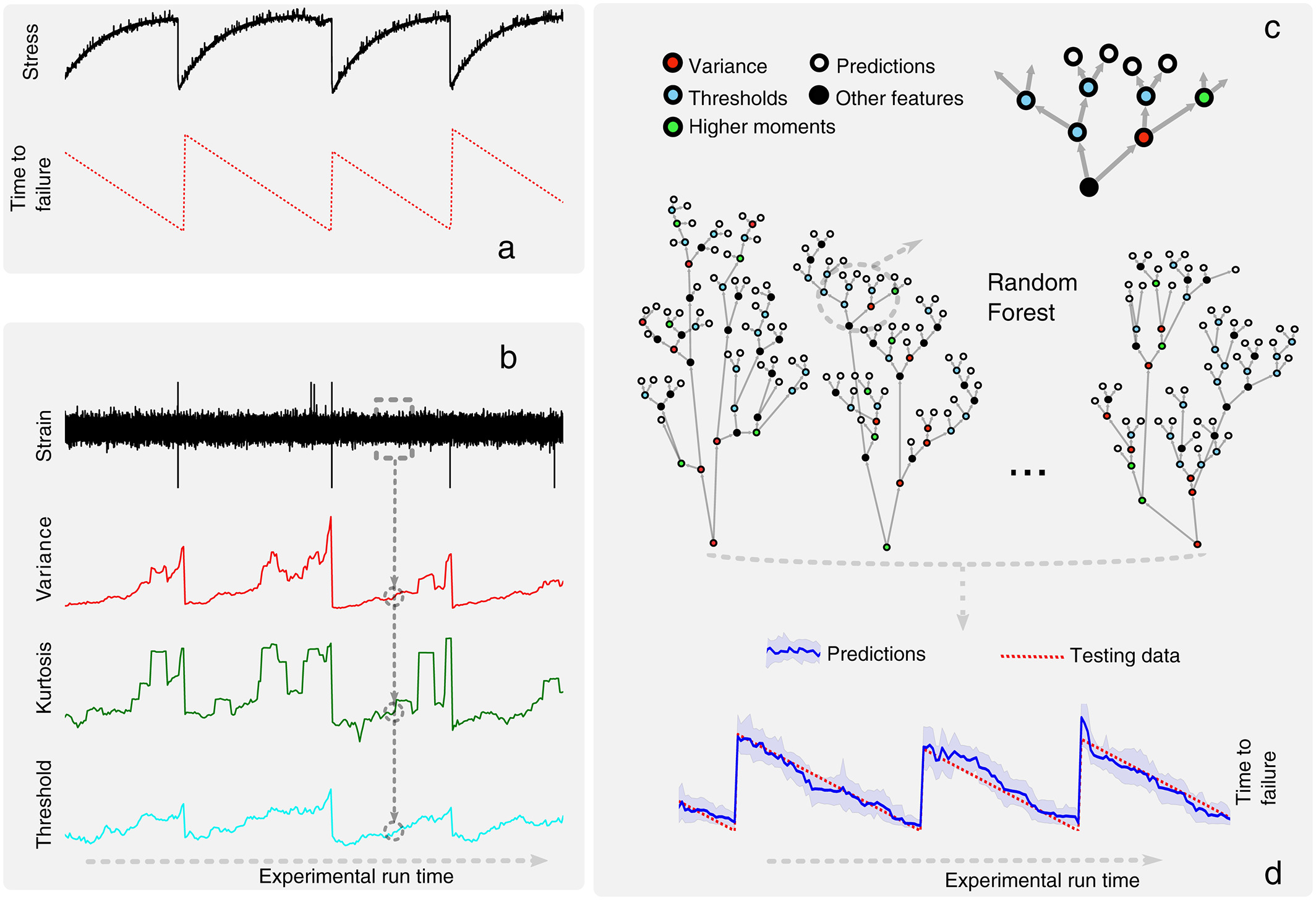 Random Forest (RF) approach for predicting time remaining before failure. (a) Shear stress (black curve) exhibits sharp drops, indicating failure events (laboratory earthquakes). We wish to predict the time remaining before the next failure derived from the shear stress drops (red curve), using only the (b) acoustic emission (dynamic strain) data. The dashed rectangle represents a moving time window; each window generates a single point on each feature curve below (e.g., variance and kurtosis). (c) The RF model predicts the time remaining before the next failure by averaging the predictions of 1,000 decision trees for each time window. Each tree makes its prediction (white leaf node), following a series of decisions (colored nodes) based on features of the acoustic signal during the current window (see supporting information S1). (d) The RF prediction (blue line) on data it has never seen (testing data) with 90% confidence intervals (blue shaded region). The predictions agree remarkably well with the actual remaining times before failure (red curve). We emphasize that the testing data are entirely independent of the training data, and were not used to construct the model. Data are from experiment number p2394.

If you look at the stress graphs from the above graphic, you will see very similar patterns to PuterMan's "stress sawtooth graphs" as can be seen in this excellent thread entitled, "Quake Nerds Corner: Understanding Earthquake Figures."

With advances in computer technologies, both hardware and software, we are coming closer and closer to a reliable method of predicting earthquakes. The question is whether or not this will translate into real world applicability and early warning systems. The technology is available, proven, and could be implemented if the will to do so is there.

posted on Dec, 19 2018 @ 12:54 PM
link
a reply to: jadedANDcynical
Eric Dollard has also done some experiments with audio-seismic devices
in an attempt at some kind of early warning system for earthquakes.

It might in the full paper, but it is behind a paywall.

However, I doubt that prediction is spelled out specifically.
edit on 19-12-2018 by jadedANDcynical because: Extraneous period

Brilliant and genuinely thanks for sharing - was on Phys-Org today and yesterday and somehow failed to spot this!

It is certainly another useful tool in the armoury but i am not so sure regarding the animals. I have only skimmed through so far so have probably missed the relevant part but this seems more useful for slow slip earthquakes. If that is what animals were sensing them surely they would be in a long state of agitation? Rather than getting agitated just prior to earthquakes?

If that IS the case, then it is actually good news because it means there is still another piece of the puzzle to discover.

Yeah, I suppose I didn't make that particularly clear in regards to animals and their response to earthquakes.

I would imagine that the slow slip quakes acoustic signal would be below the threshold of detection whereas the signal from a traditional quake would be intense enough to be detected by the various animals.

This of course would also be dependent upon a number of factors such as depth of the fault, rock type, sheer stress, etc.
edit on 19-12-2018 by jadedANDcynical because: (no reason given)

posted on Dec, 19 2018 @ 03:04 PM
link
I understand that the absence of birds can be a dead giveaway. Whenever I'm down by the water I always look for the birds, if they look happy, it puts me at ease.