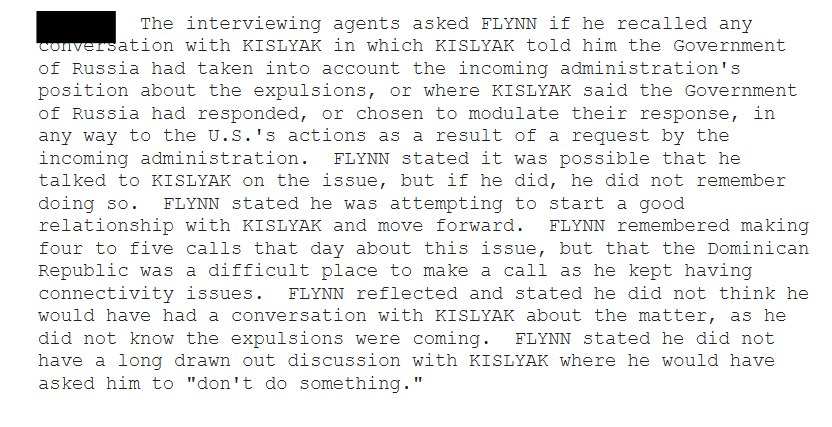 this will all lead back to the obama administration authorizing illegal surveillance on the incoming administration of a rival political party, then using the illegally gained information against its political rivals

originally posted by: sligtlyskeptical
How many times are you going to make a thread on this? Flynn lied, he admitted it, and still admits it. The agents that wrote the 302's were incorrect in their judgement and yet you use their words to repeatedly try to defend Flynn who is an admitted traitor to our country. Willfully ignorant.


originally posted by: sligtlyskeptical
How many times are you going to make a thread on this? Flynn lied, he admitted it, and still admits it. The agents that wrote the 302's were incorrect in their judgement and yet you use their words to repeatedly try to defend Flynn who is an admitted traitor to our country. Willfully ignorant.


That is simply my opinion. Taking his position all while trying to stay a foreign agent. To me that is being a traitor, although we all know that you technically can't be a traitor unless we are at war. He still sold out America for his own personal benefit - to me that is being a traitor. And it appears that you could care less because he on the 'right' side. Which is why everything you post should be ignored. You are captured and only point those facts which you think absolves Flynn while ignoring everything that implicates him, especially his guilty plea.
edit on 20-12-2018 by sligtlyskeptical because: (no reason given)

Im pretty sure that the information on the tapes is classified. But Mueller has them and he knows that Flynn lied.

Really?... Flynn lied?... Is that why Comey and McCabe lied to Congress and hid the fact that even Strzok and the other FBI agent said they didn't think Flynn lied?...

Perhaps something like this should happen to people like you to realize that this is wrong. Because it seems to be the only way for Clintonites to understand what is going on, and that even if you love Shillary, that is no excuse for celebrating this sort of stasi/nazi entrapment... But fear not, in the end real justice will be served.

The Judge protected one of the biggest illegal drug suppliers in the world and now threatening Flynn with death penalty if he does not say Trump was involved, even if he has to lie and he has 90 days to do it or else Treason and the death penalty may come into play.

The requirement of testimony of two witnesses was inherited from the British Treason Act 1695.
en.wikipedia.org...


And Mueller, here we have a guy who loves lying witnesses and framing people who did not commit the crime, blocked 911 investigation and helped cover it up, married to a lady, who's family is suspected of being involved with the JFK assassination and known to be part of the nefarious swamp lagoon protectors

Check your mailbox there’s something related you should see .

Now we know the crime involving General Flynn was this:


The “crime” came days after the inauguration, when FBI agents Peter Strzok and Joe Pientka questioned Flynn at the White House about his conversations with Russian Ambassador Sergey Kislyak.

Yet the FBI had already reviewed transcripts of the calls and found nothing illicit. The visit was a fishing expedition: The agents even skipped the customary heads-up to the president’s Office of Legal Counsel — aiming to avoid having a lawyer present for the talk.

Even so, Strzok and Pientka wound up finding “no indication” that Flynn had lied to them. But then FBI lawyer Lisa Page(Strzok’s mistress at the time) instructed them to alter their official writeup of the conversation to say otherwise. And that’s the entire basis of the charges against him.