When Physics gets Spooky!

originally posted by: Flyingclaydisk
Take a look at the following picture. At first it doesn't seem like much, a simple magnet floating above another apparent magnet held in stasis by the opposing magnetic fields, right? But wait... 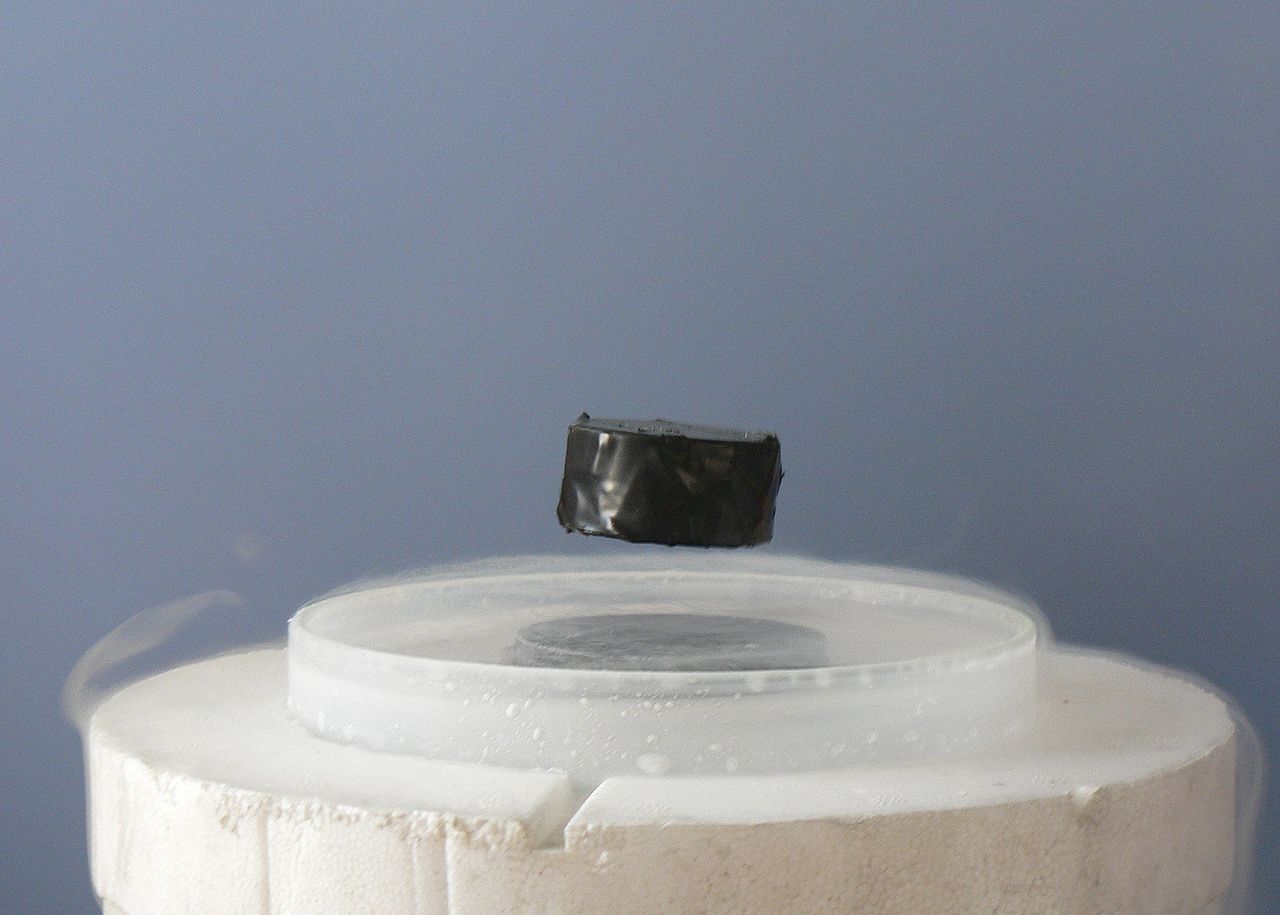 That's not what's actually going on here. The black object is indeed a magnet, but the object it's floating above is actually a high temperature superconductor cooled with liquid nitrogen. Perpetual electric current in the superconductor creates a field which excludes the magnetic field of the magnet. It's not a new concept, the Meissner Effect; it was discovered in 1933.

Now, if we consider that up to 30% of the mass of the planet Jupiter is comprised of Metallic Hydrogen, a superfluid, and scientific research is advancing in the areas of high temperature superconductors (i.e. room temperature), well, WOW! So, we don't really understand what we're looking at exactly. There are things going on which we can cause to occur, but we don't understand fully why.

Now go back and look at the picture again for a moment.

It is both breathtaking and mind blowing in the same moment.


All great physisis made it to the point where things became to over powering and made them believe there was a creator.

Didn't know you were interested in physics, I am to a degree but lack a lot of understanding of the core concepts involved. I always found the results of various experiments and especially relativity and the study of what time is and how it works to be interesting and also dumbfounding.... and when you start to consider the implications these results have on the world around us and maybe even our reality... it is unsettling

superfluidity and superconductors are another area of research I semi-actively keep up with (mostly through phys.org and arxiv)

Sure you are familiar with this, but here is a good resource for anyone else that enjoys staying up to date on all sorts of sciences: arxiv.org...


I would do Physics if I started all over but Chemistry is close. I am morphing from a Biologist to a Physicist. I became infected with it in Chem 101 and went ahead with the Biology major too. That added a couple of years to my schooling before any Grad school work. That balance of both has helped me in understanding the Environmental Chem out here in the real world. Plus I get to work in the field I went to College to study. (Mr Cousteau, thank you for those wonderful undersea lessons that inspired us all.)

As for it being metallic Hydrogen, there was nothing else it could be. It started as hydrogen was put under pressure and gained metallic properties.

You are automatically assigning those properties to the hydrogen that was present, based on their readings.

My suggestion is more, that something else could have been going on giving it the appearance.

I'm not well versed in putting tremendous pressure on atoms, but perhaps there is a point that shell layers of different atoms will overlap, more often than in a standard state? Simulating the behavior of an atom with different properties being present, although it is just a subatomic interaction that we are unfamiliar with.

Maybe or maybe not, I won't arrive at a stone set opinion on an internet forum.

Atoms can never overlap in fact the rule is they cannot occupy the same space at the same time. What caused it to become metallic? Ots called a phase shift the hydrogen wants to become a plasma but the pressure won't allow it . Now as far as overlapping well electrons will never share the same energy level, which means they will keep piling on top of each other, never getting closer, even if you squeeze really, really hard.

Another way to look at the situation is via the so-called Heisenberg uncertainty principle: If you try to pin down the position of an electron by pushing on it, its velocity can become very large, resulting in a pressure force that resists further squeezing. So in other words no matter how hard you squeeze you cannot force elements to be in the same place at the same time.

I thought we studied science so we could understand physics, not find something spooky?

Why is it considered high temperature if they have to cool it with liquid nitrogen?


Because the regular superconductors have to be cooled to just a few degrees above absolute zero using liquid helium.

HTSC do not have to be cooled that far down before transitioning.

Just this week, they set a new record for a HTSC at -23 °C, which is warmer than dry ice!! Noted, it was done under a ridiculous amount of pressure but it demonstrated theory. [same source as below: @ "170 gigapascals"]

The work comes from the lab of Mikhail Eremets and colleagues at the Max Planck Institute for Chemistry in Mainz, Germany. Eremets and his colleagues say they have observed lanthanum hydride (LaH10) superconducting at the sweltering temperature of 250 K, or –23 °C.

Source: technologyreview.com (Warning: Only 5 free looks before they shut down your access!) - The record for high-temperature superconductivity has been smashed again.

The hydrogen "lines up" similar to what theory says should happen with metallic hydrogen. They sub out pure hydrogen for another element, lanthanum in this case, and compress the h3ll out of it. The result is a stable molecule that SC at higher temperatures. This is just a step towards room temperature superconductivity (under high pressure).

My thought. If you can freeze water in carbon nanotubes (restrict the molecule's movement so they line up like ice does) and it stays stable above the boiling point of water (they threw some in boiling water and the ice stayed frozen), why not throw some lanthanum hydride in carbon nanotubes (CNT), encase the thing in dry ice in another layer of CNT, and do it that way??

My bet, that is where they are headed.

posted on Dec, 13 2018 @ 04:20 PM
link
a reply to: dragonridr
You are incorrect because you are confusing Pauli's Exclusion Principle with Heisenberg's Uncertainty Principle. If atoms have zero spin angular momentum, they are bosons and CAN occupy the same space at the same time. This is the state of a Bose-Einstein condensate. There is NO rule that atoms cannot occupy the same space at the same time; it all depends upon their spin angular momentum. If they have half-integral spin, they are fermions and avoid each other if they are in the same spin state because their total wavefunction has to be antisymmetric, which means their spatial wavefunction has to be antisymmetric if they have parallel spins, so that there is zero probability of their being in the same place at the same time.
Your interpretation of the Uncertainty Principle is also incorrect. Pinning down an electron in space does not make it go faster - it merely results in a greater uncertainty of our knowledge of what momentum it has. It is a common mistake many students of physics make that an increase in the standard deviation of the momentum probability distribution (the statistical property that is expressed in the Uncertainty Principle) is synonymous with an increase in its measured momentum. It's not, because the expectation value of its momentum (measured value), as determined by some probability distribution curve, is unaffected by the curve flattening. What increases is the standard deviation of the possible values of its momentum, not the measured value.

Okay, Einstein, why don't you take us into the 21st Century!

The key to this discovery was creation of a metallic, hydrogen-rich compound at very high pressures: roughly 2 million atmospheres. The researchers used diamond anvil cells, devices used to create high pressures, to squeeze together miniscule samples of lanthanum and hydrogen. They then heated the samples and observed major changes in structure. This resulted in a new structure, LaH10, which the researchers previously predicted would be a superconductor at high temperatures.

While keeping the sample at high pressures, the team observed reproducible change in electrical properties. They measured significant drops in resistivity when the sample cooled below 260 K (minus 13 C, or 8 F) at 180-200 gigapascals of pressure, presenting evidence of superconductivity at near-room temperature.

Another team has also done the Lanthanum hydride under pressure study. When they re-did the study they say the Tc rise to 280 K.

Over at NextBigFuture there is an article up about carbon nanotube strength. They can reach 100 G Pascal and there is a claim of 1 TPa.

It only makes sense to encase LaH in CNTs under pressure and have a room temperature superconductor as at least proof-of-concept.

nextbigfuture.com - China 80 Gigapascal Carbon Nanotube Bundles Were Part of a Prediction from 2006.