Unless France is under a monarch and they have no way to replace leaders in elections, no it's not even remotely the same. What an odd comparison to make?

I suspect you know that France elects it's leaders, right? I'd think the answer is to elect someone else and not to loot, burn and destroy property.

The topic though as I read it is to do with the authorities behavior and they are just protecting the peace and meeting force with force. To criticize them is very disingenuous when the video's of criminal behavior by many of the rioters are so easy to find. Law enforcement can't change the laws or legislate.

I'm society there are always those who just want to see it all burn down, the protests are being hijacked by thugs which in turn force a heavy crackdown on protesters, the vast majority of which just want some fairness, it should never have reached this point to begin with, however it has so here we are .

How does looting and destroying innocent peoples property help exactly? If my neighbor pisses me off, would it make sense to drive across town and destroy a random business to get even? Same logic.

Your OP was criticizing the police for doing their jobs, which is all I see them doing. So you want them to just go away while the city burns and innocent people are harmed? I think their job is to protect property and no doubt they have the right to defend themselves in the process. That is literally all they are doing.

I'm not even commenting on the reason for the riots.

Yes it's sad those thugs always seem to show up in peaceful protest all over the world. The protesters should turn on them and self police, or at the least cooperate to allow the police to do their jobs with less problems.

Yes indeed, just seem to show up might be code for agent provocateur...


The problem is if their was only a peaceful demonstration, nothing will get done to cure the problem of the protesters, but when property gets damaged and rioting starts it gets the Governments attention. If your favorite restaurant gets trashed and you have to go some place else while it gets refurbished that tends to piss you off .


Obvious crimes against humanity with the use of chemical weapons.

I demand the U.N. be sent in


But would that not be a prelude to marshall law ?


Not what the OP said...
Marshall

posted on Dec, 9 2018 @ 02:16 AM
link
We are indeed seeing history. But we are also seeing something else: the hard reality of protest. I have seen quite a few people who are so enamored with this right to protest, some have even said they taught it to their children.

Yes, we have a right to protest. Peacefully. But rarely do protests remain peaceful.

There are three basic states of society: complacency, protest, and war. During complacency, people go about their daily lives more or less contentedly. During protest, people become angry at injustices they see and decide that something must be done to stop those injustices. During war, they kill each other to stop the injustices. History is a recounting of societies as they move through each of these cycles.

The United States was founded on recognition of this cycle, albeit not always well described. The Declaration of Independence did a pretty good job, though:


Prudence, indeed, will dictate that Governments long established should not be changed for light and transient causes; and accordingly all experience hath shewn that mankind are more disposed to suffer, while evils are sufferable than to right themselves by abolishing the forms to which they are accustomed.

"disposed to suffer"... the state of complacency.

But that document was not written during a period of complacency; it was written during a time of protest. People were angry. People were fed up. The Declaration of Independence itself could be seen as a protest to the powers of England. And we all know what happened after that: war. During war, people die... a lot of people die. War is not some game where the two sides line up and try to fight until one says "UNCLE!" War is when two sides determine that their only reasonable course of action is to kill other people because those other people are oppressing them.

In every single war, those fighting tend to forget that to the other side, they are the oppressors.

Complacency is peace. Complacency is the preferable state of being for most. But there is an inherent difficulty with complacency, and that is human greed. People who have idle time always find ways to use up their resources to fill that idle time. We have entire industries devoted to providing fill for idle time: TV, movies, travel, entertainment, games... but all of these industries require some sort of resources from those who use them, and no one has unlimited resources... so what happens when there are not enough resources to fill the idle time?

Protest happens. That's when people become both desirous of more resources than they are able to produce and demand more from those who they believe have unlimited resources. People begin to see injustice at every turn. Why should they be forced to not have what they desire, when it looks like others have it? So protest begins.

Note that protest is not always caused by idle time alone... it is caused by insufficient resources to fill that idle time. High taxes, class immobility, poverty, unemployment can all create the right conditions for protest, as long as there is enough idle time to be unfilled.

In many ways, protest is a relief valve for society. It is a way to let the anger from years long past to escape. That's why protests are rarely peaceful: they exist as a pressure relief valve, and there are always those who need more pressure relieved than peaceful means can accomplish. If the protests go unheard, or if they are shut down by brute force, then war comes. The relief valve failed, and the pressure causes everything to explode. Unfortunately, Blaine is correct in that there is little an authority can do once protests turn violent, other than to respond with violence. That sets up a vicious spiral that is the root cause many protests lead to war.

France has gone through this once before: the infamous French Revolution. That was an interesting study in the cycle of complacency - protest - war. The war in that case did not relieve the injustices seen, so any complacency was extremely short-lived and the remaining anger caused any protest period to be quite short as well. The revolutionaries accomplished their goal of overthrowing the monarchy, at a high cost in lives, but then became the new monarchy in the eyes of others. These others then overthrew that monarchy as well and became the monarchy. Wash, rinse, repeat. There were no victors when all was said and done, unless one counts survival itself as a victory.

I hope we are not seeing another such period in French history.

But more to my point, I hope we are not seeing our own future. Those who claim gleefully how well they protest do not realize the danger they play with, especially when they themselves have no workable answers. The lessons of history are clear: be extremely careful when you play around with unreasonable protests, because if you win the coming war, you will then be the next target. That lesson has been forgotten, and it seems that it must be repeated.

Watch close, those of you who are young. Learn your lessons well. Someday, you will have the opportunity to pass those lessons down to the younger generation. I pray you will be more successful than my generation apparently was.

Normally, probably due to my add, if a comment or post is too long I'll just quietly apologise and scroll past,

Your comment above however had me glued, if it was the opening page of a book, no one would have gotten a word out of me until I'd finished it.

posted on Dec, 9 2018 @ 06:04 AM
link
I don't know much about tear gas, but was thinking, if the protesters took buckets with them they could quickly put the bucket over the canister when it lands to contain the gas, peacefully counteracting the police tactics.

The American colonies in the 1700s were faced with higher taxes and under tyrannical rule. They rebelled

I always laugh when i hear this.

Hahaha... now you have me wanting to write a book.

I meant what I said though... learn those lessons better than we did. My generation failed us all. Don't let yours fail.

originally posted by: TheRedneck
Yes, we have a right to protest. Peacefully. But rarely do protests remain peaceful.

There are protests and demonstrations of one sort or another through the UK every day. They always remain peaceful. Very rarely are protests taken over by the mob - a small number of people intent on vandalism and mayhem. People hate the "trash MacDonalds" brigade, but people would not support police brutality. Firmness Yes, brutality No.

posted on Dec, 9 2018 @ 08:59 AM
link
I'm sure everyone here has seen the EU symbol emblazoned on the sides of those APCs (or whatever you wanna call them).

This is going to get real interesting.

And exactly what do these peaceful protests every day accomplish?

originally posted by: TheRedneck
And exactly what do these peaceful protests every day accomplish?

Change and raise awareness. Some do make a difference, even when apparently do not.
edit on 9/12/2018 by paraphi because: (no reason given)

So you're OK with stomping all over other peoples rights? Harming innocent people and their property?

That's not protest. It's just plain old fashioned criminal creeps acting like who they are. You don't really think the looters and violent nut jobs actually care about any cause do you? They are parasites.
edit on 12/9/2018 by Blaine91555 because: (no reason given)


So you are saying that the original French revolution should never have happened because the peasants , had no right to storm the bastille because they were destroying property.? At some stage protest of this nature always becomes necessary. Twelve thousand British pensioners froze to death last winter, because they couldn't afford to heat their homes. Sorry if it offends you.

Where is the monarchy they are protesting against, since you invoked the French Revolution? I'm fairly sure France has elections and they can vote out leaders they don't like.

originally posted by: hopenotfeariswhatweneed
a reply to: Blaine91555

I'm society there are always those who just want to see it all burn down, the protests are being hijacked by thugs which in turn force a heavy crackdown on protesters, the vast majority of which just want some fairness, it should never have reached this point to begin with, however it has so here we are .

No way to know that for certain, when we're being told by the MSM that its only about the gas tax. 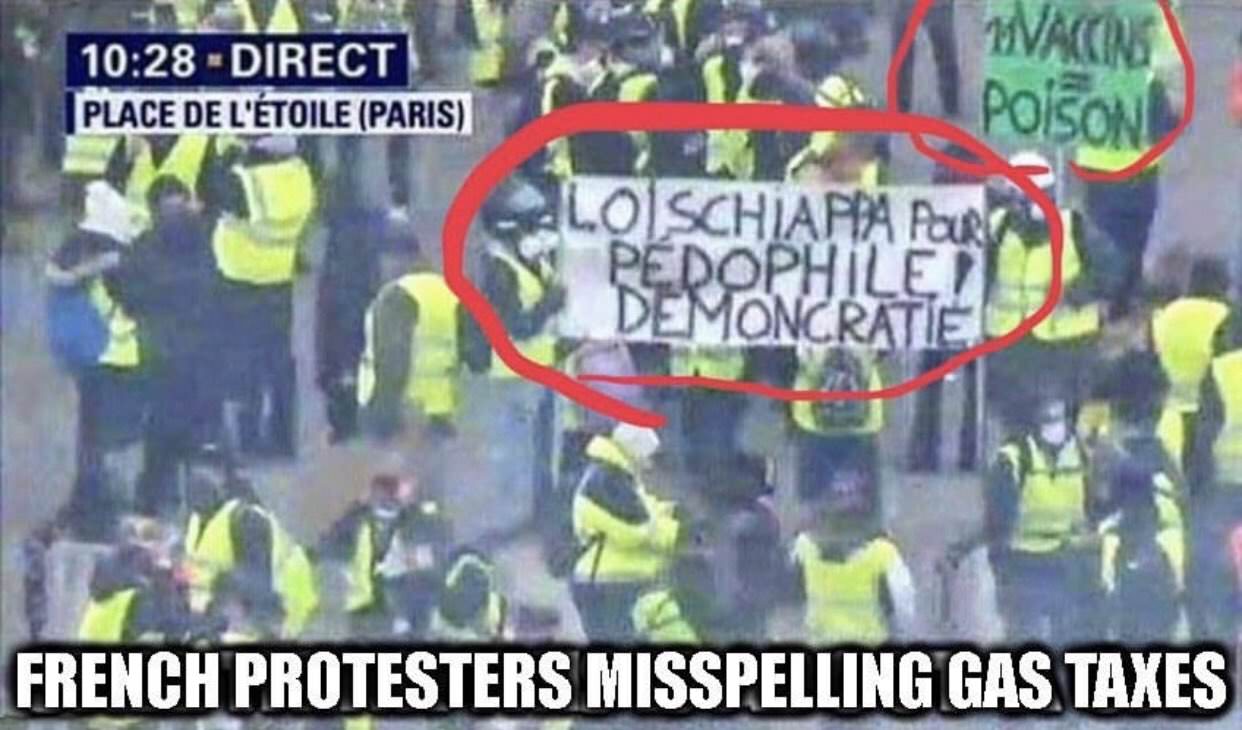