posted on Dec, 7 2018 @ 07:21 PM
link
Hey I haven't been on the site for a few months (nor have I been making new UFO-related content on my channel) but I did just make some new color-manipulated versions of a UFO photo, taken during the Gemini 10 mission in 1966. (I never knew much about this particular mission, but it was based on sending a craft into space, that successfully connected to two different unmanned spacecraft, that were already in orbit!)

So the space mission itself is amazing, and was plagued with many minor problems (like small leaks appearing in various parts of their craft) so it's incredible that they survived, let alone connected with 2 unmanned craft.

There were at least a couple UFO photos taken during the mission.

Mostly out of my own curiosity, I experimented with trying to bring the most clarity out of one UFO photo. The ONLY thing I've done is increased the bright colors and dark colors, to create a few differently-colored versions of the original photograph.

All versions show 3 distinct glowing shapes: 2 glowing spheres with a glowing bar in between them. My different color-versions are only helping to see it better, by only increasing / decreasing the colors.

The top-left would seem to show a hard gray edge of the craft.

However, the most color-increased version makes the whole object seem like it's made of / surrounded by glowing plasma.

I will next embed the different pics, and then I'll post my vid that I made about it, and the vid is only saying the same stuff in my post. Channel doesn't make money. I made the vid out of my own interest, and it seems I've made some unique versions of this one amazing photo.

Anyhow here are the different pics:

Here is the original photograph, taken from one of the astronauts in 1966: 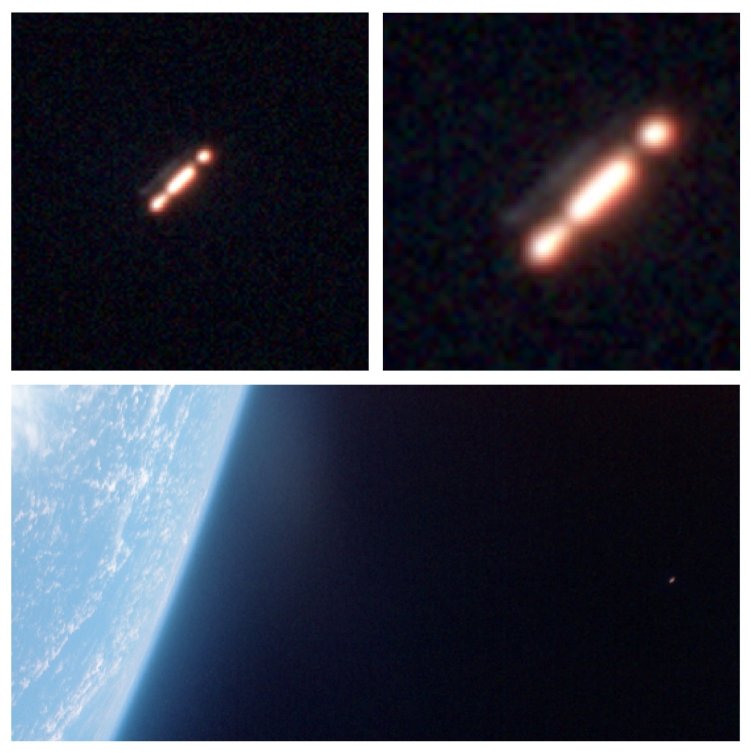 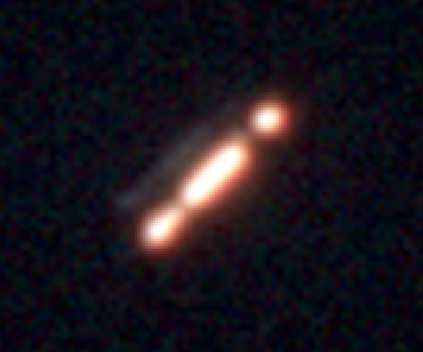 Now my color-manipulated versions of this photo: 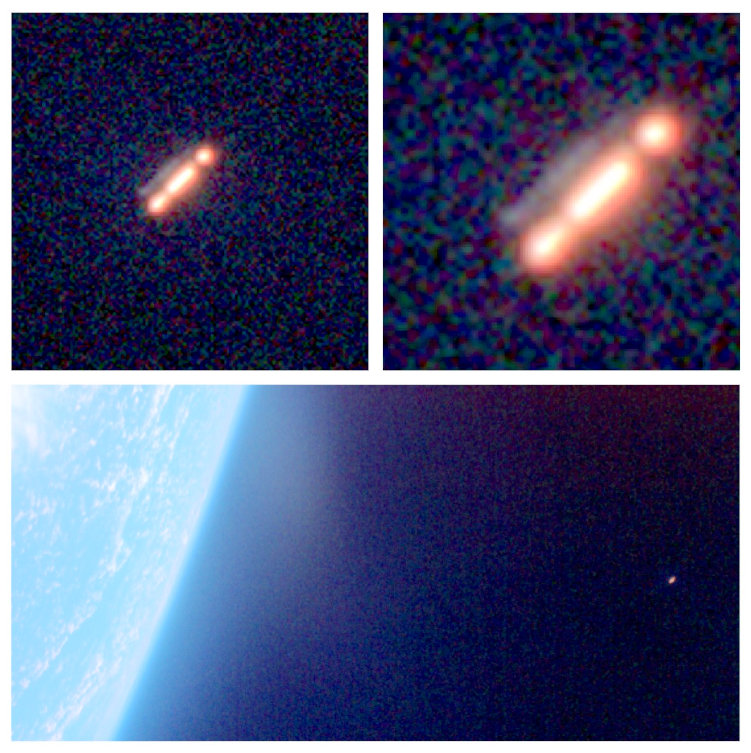 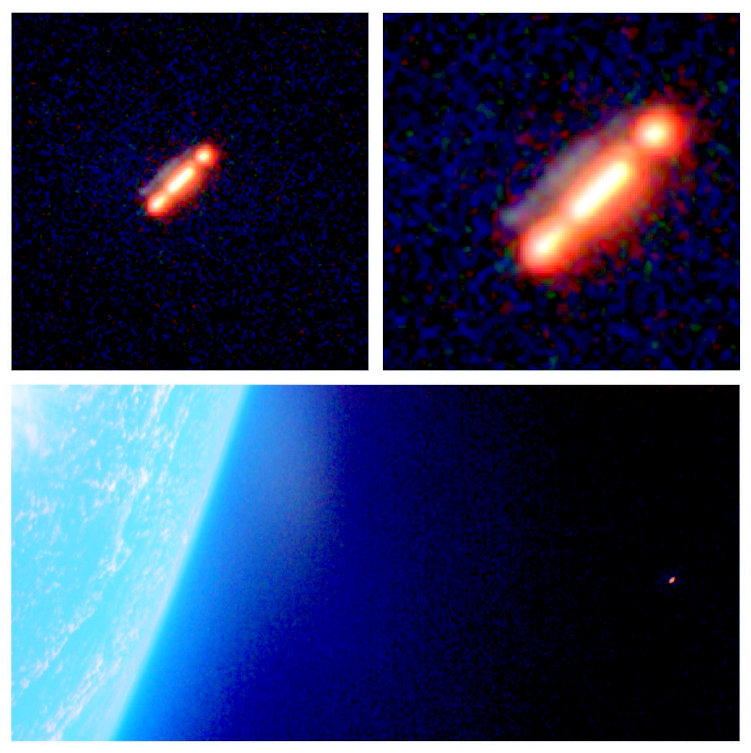 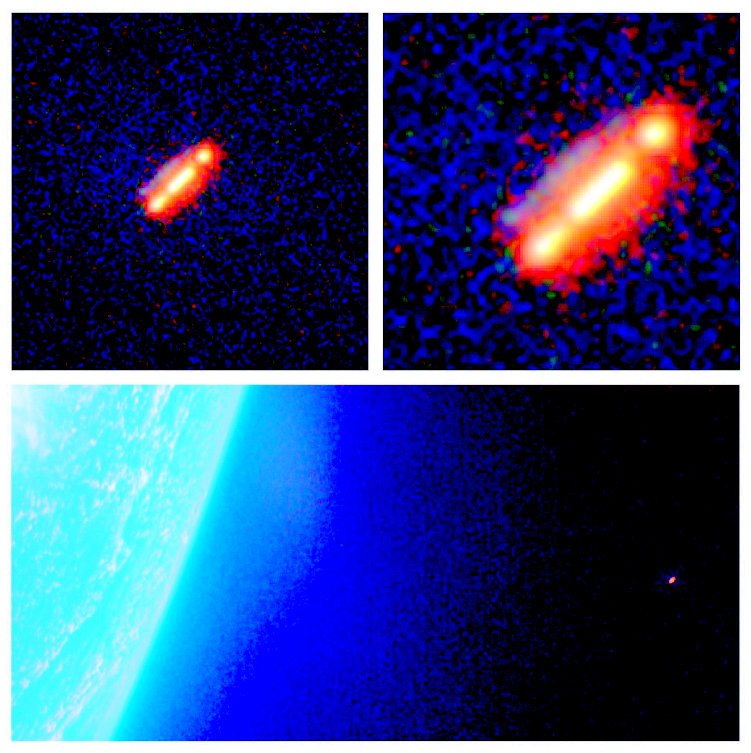 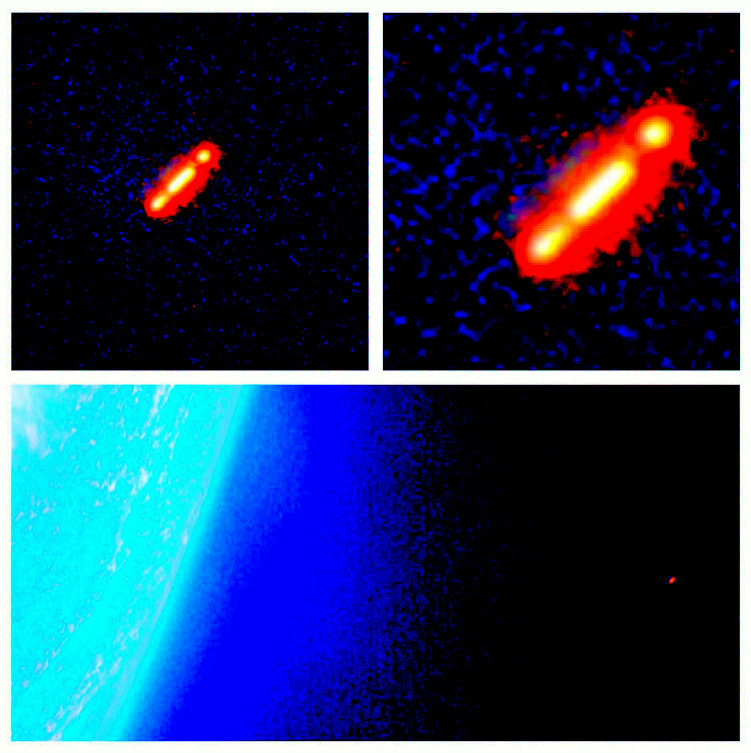 Finally, here's my vid that covers everything in this post:

I also don't know if there's much discussion to be had about the photo, but I think it's one of the clearest and most compelling photos ever taken. The artificiality is very obvious in the symmetry of the object / objects.

Also there's that common complaint / criticism that there's not enough clear photos in ufology. Well this one is amazing especially for 1966.

My vid also includes some original TV footage of the space mission because I find it amazing that TV was so primitive and blurry lol, even while documenting space flight lol.

Anyway I hope there's some possible good discussion about the photo.

That's some crazy F'd up stuff.

Seriously....it's not the Millennium Falcon.

So pareidolia indeed or a UFO.

Either way it's an interesting picture.

It is Space Force.

100% first thought also, imagine Han was based on fact!!

Then Googled the event and Dam that Mr Oberg


July 18, 1966-Gemini 10: John Young and Mike Collins saw a large, cylindrical object accompanied by two smaller, bright objects, which Young photographed. NASA failed to pick them up on screens. The astronauts reported two bright fragments near their spacecraft soon after launch, presumably pieces of the booster or of some other satellite. No photos were taken. They were out of range of NASA radar at this point anyway. Dramatization of ordinary space event.

Seeing The Millenium Falcon is no ordinary event Jim
edit on 7-12-2018 by UpIsNowDown because: link


What the hell is an alluminum falcon?

If one feels into the photo, sometimes one can feel awarenesses. Very few photos on ATS respond.

But this one did.

Four awarenesses without intellect. The emanation from the photo is "friend".

I have no idea?

Do you mean "aluminum"?

I mean ones a silvery-white, soft, nonmagnetic and ductile metal and the other a bird of prey.

Think i still have the plastic Millennium Falcon somewhere in the loft from when i was a lad.

Some nick all the same, i remember melting part of it to simulate Tiefigter battle damage. LoL

Wish i had kept it in the box now.

Would be my first guess, but given the astronauts independently reported it, that is unlikely.

However, judging by the sunlight on Earth they are probably oriented away from the sun. Maybe an exterior piece of the craft is reflecting into the window? Would explain the lack of radar confirmation.

Not knowing the optical characteristics of their window, it may also be possible that the three lights are a refracted view of light reflecting from the Earth, the moon, and the sun.

These are all the theories I can think of, that are not booster or various satellite/space junk explanations.

To say any more would be presumptive. They could be prerecorded feelings that are broadcast.

It has me scratching my head. Like most folks who think with intellect, I have not thought about "aliens" broadcasting communication on the "feelings" or "emotional" level. One always thinks of messages conveyed via electromagnetic or some other modulated carrier.

It might be that "aliens" might just broadcast emotions since anyone can pick those feelings up if they are sensitive and actually take notice. Come to think of it with feelings there is no need for a "universal translator". A friendly feeling is a friendly feeling.

It has me thinking anyway.

originally posted by: Archivalist
Reminds me of an instrument panel reflection.

Would be my first guess, but given the astronauts independently reported it, that is unlikely.

However, judging by the sunlight on Earth they are probably oriented away from the sun. Maybe an exterior piece of the craft is reflecting into the window? Would explain the lack of radar confirmation.

Not knowing the optical characteristics of their window, it may also be possible that the three lights are a refracted view of light reflecting from the Earth, the moon, and the sun.

These are all the theories I can think of, that are not booster or various satellite/space junk explanations.


Actually, as far as I know: The photo is from 1966, but no one reported the UFO until 2013. And it seems that it was discovered by that website that's mentioned in my vid. (So I'm not aware of the astronauts actually reporting it AFAIK.)

Instrument panel is a decent explanation actually. I was expecting people to explain it away as a streak of light from a comet or something lol.

posted on Dec, 7 2018 @ 09:30 PM
link
However I believe that the photos were taken through open space AFAIK. The mission included something like 12 different experiments, including photography, so the astronauts were definitely taking photos out in open space, and also, photos being snapped through the open door of their craft. (They wondered if photographs would still work the same way, in space, and if the film would register colors the same way.)

So I think it's most likely that the photo was either taken in space-walking, OR taken through an open door. The mission was highlighted on open-space photography after all.

This is from the first one. 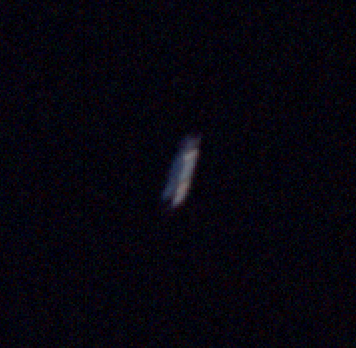 Looks to be either their booster or the one from Gemini 8. Both of which they rendevoused with. 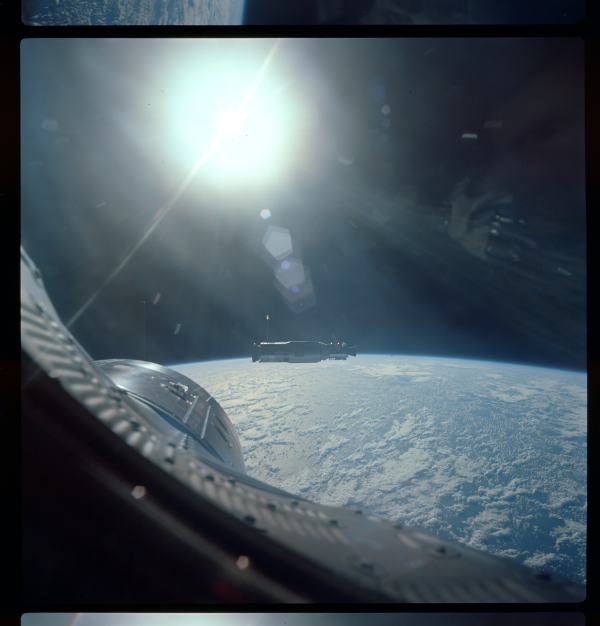 originally posted by: Phage
Very high resolution scans can be found here (for the past 6 or 7 years):
tothemoon.ser.asu.edu...

This is from the first one.

Looks to be either their booster or the one from Gemini 8. Both of which they rendevoused with.

Just to make sure I understand: When you say it's their booster, or that of Gemini 8: Do you mean that you think it's a glass reflection of their propulsion system?

One thing we can rule out, actually, is any source of light from the Gemini 8 craft. Because it was actually completely dead / lifeless, no electricity at all. (The first unmanned craft did have power, and it helped bring them up to the second, dead craft.)

So you think it's glare from one of the crafts' propulsion. Right?

Do you mean that you think it's a glass reflection of their propulsion system?


No. It is the Agena booster stage which was adapted for use as a docking target.
en.wikipedia.org...

Oh OK. I'm looking at the very high-res photos right now. Thank you for the link...

OK I have to admit that I think you're right. I think the sunlight is catching a very bright glare, on one of the two unmanned craft that they docked with, in a couple of the photos, especially the one that I made the thread about. Your link of high-res photos does seem to clear it up. The lights are symmetrical and seem artificial, because it's just sunlight on our own artificial craft.

I do appreciate that link and I'll have to spend some time surfing around that site.
edit on 7-12-2018 by peacefulpete because: (no reason given)