Two USMC down in Japan 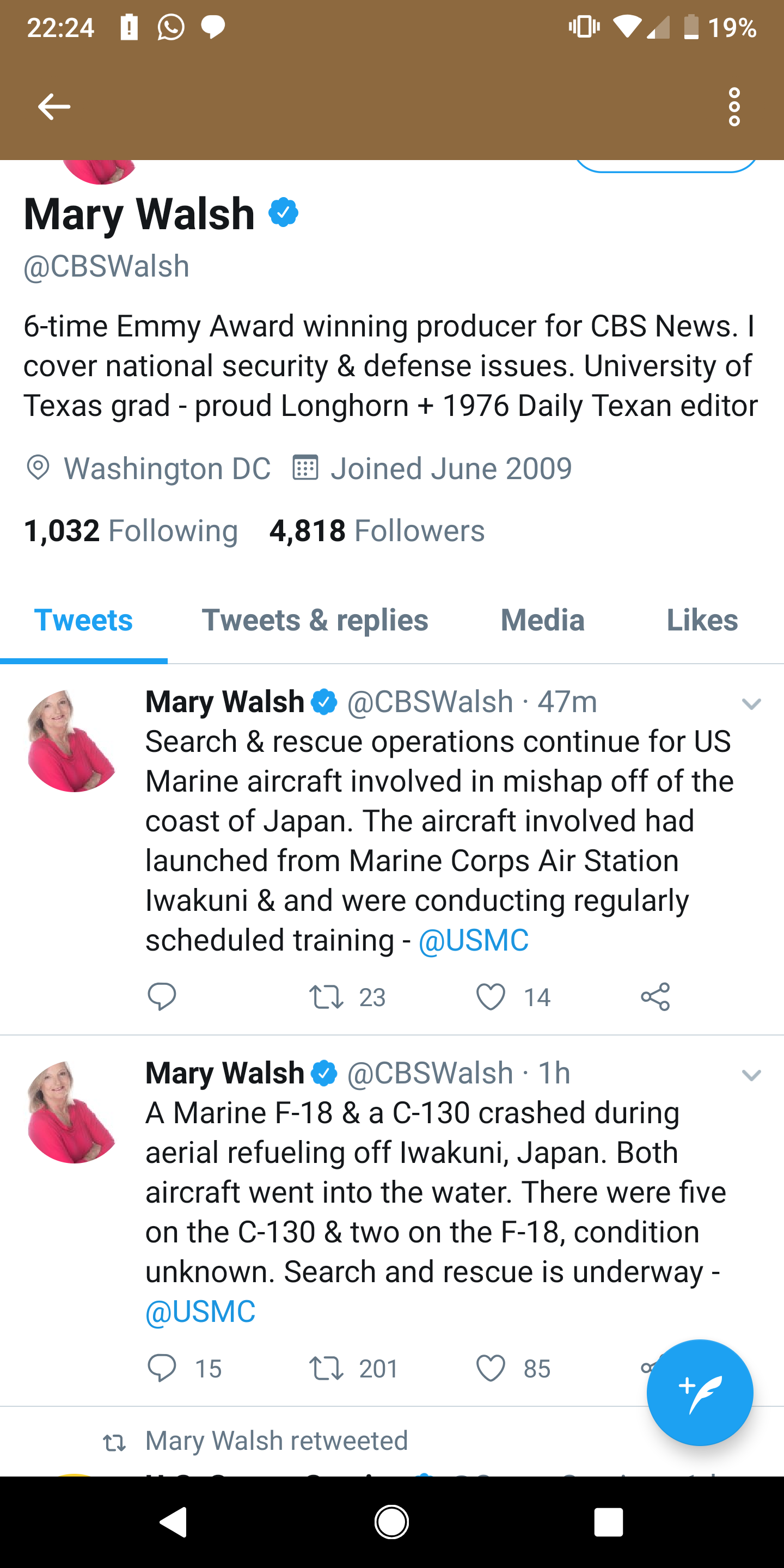 A Marine Corps KC-130 aerial tanker and an F/A-18 Hornet have crashed off Japan, a defense official told Task & Purpose on Wednesday.

“Search and rescue operations continue for U.S. Marine aircraft that were involved in a mishap off of the coast of Japan around 2:00 a.m. Dec. 6.,” a Marine Corps news release said.

“The aircraft involved in the mishap had launched from Marine Corps Air Station Iwakuni and were conducting regularly scheduled training when the mishap occurred. Japanese search and rescue aircraft immediately responded to aid in recovery.”

A total of seven personnel were believed to be on board the two aircraft, according to ABC News’ Elizabeth McLaughlin.

originally posted by: Zaphod58
It was most likely a KC-130J from VMGR-152 out of Iwakuni.

originally posted by: Zaphod58
It was most likely a KC-130J from VMGR-152 out of Iwakuni.

Never mind. Found their page that lists the units!

Thank you, Zaph! I was curious because my recently ex neighbor popped into my head when I read about this, for some reason. I have no evidence as to where he is or even what he's doing. In fact, I'm not even sure as to what branch he is in. Its a pretty odd story that makes very little sense but there is quite a bit of weirdness regarding the folks that work (not stationed) at the base near me. Technically, it is a closed down air base that sometimes has reserves there but always has a large presence of "contractors" that work there. It's been that way for many years but used to be a big name base and last I heard, it is kept up and not allowed to go into a state of disrepair.

This guy used to be active duty Marine but somehow ended up at this Air Force base as a "civilian contractor" but was dealing with Air Force reserves, in some sort of official capacity. According to him, his contract was about to run out and assumed they would offer him a new one but decided to change things up. So, he had to find something else real quick because he only had just over a year before he qualified for pension. Yes, I know, this sounds insane. Anyways, he found a job in North Carolina and was gone within 2 weeks. No idea about what the job was nor where exactly in North Carolina. He just came over one evening and asked for me to keep an eye on things while he was gone until the house sold. He didn't ever want to get into details.

My question, is it even possible to continue to gain time towards your pension as a civilian contractor? If not, why would it matter all of a sudden to move because you only have a year left? Why was it not a priority before taking this civilian job? Why go from being active duty USMC to civilian work with USAF that is not even technically at a base? He did tell me that with his new job he would not have to head to any sandy areas. At the time I thought good for him, no middle east stuff. However, I did not think about any other areas. I specifically remember thinking about Japan about a week after he was gone but have no evidence to support any of that...only a feeling. Since I don't have his number, there really is no way to contact him and we never were all that close of neighbors. We both are pretty anti social and to ourselves. We were friendly and would wave and say hi and keep an eye on each other's houses and property but that was really as far as it went. Anyways, thanks for the info but I really don't even know how I would use any of it because there are just too many unknowns and too many questions. lol!

Collision whilst trying to refuel?

originally posted by: Woody510
a reply to: Zaphod58

Collision whilst trying to refuel?

According to the command, the incident occurred around 02.00 local time. Both aircraft took off from the US Iwakuni Marine base and conducted a “scheduled training flight.”


Search and rescue operations were underway off the Japanese coast early Thursday local time after a Marine Corps C-130 and F/A-18 fighter jet crashed, and so far one Marine has been rescued, military officials said in a news release.


While the exact aircraft involved were not immediately released, Marine Aerial Refueler Squadron 152 flies the KC-130J out of Iwakuni and several fighter squadrons are based there as well, according to the command’s website.


originally posted by: Zaphod58
It was most likely a KC-130J from VMGR-152 out of Iwakuni.

The only time a reserve unit would be in japan would be for their summer deployment. As far as I know, there are no reserve units of any type that are OCONUS all the time.


originally posted by: Zaphod58
It was most likely a KC-130J from VMGR-152 out of Iwakuni.

The only time a reserve unit would be in japan would be for their summer deployment. As far as I know, there are no reserve units of any type that are OCONUS all the time.

Thank you! I just had an odd feeling. I very incoherently described it in my book above. lol Unfortunately, I have no idea which I'd even be wondering about at this time. lol

One Marine has been rescued alive while search and rescue operations continue for the other six Marines, who remain missing, a Marine Corps news release says

originally posted by: Irishhaf
If that was an incident during refuel ops, I am not going to hold out any hope.

According to one of the links I posted, it seems that at least one has been rescued...apparently alive. Lets pray the others have the same fate.

Almost certainly. It was a night AR mission.

They do six month rotations to Iwakuni. They may occasionally send a reserve unit, although it would be rare.

The F-18 crew has a chance. The Herc crew almost none.

originally posted by: Zaphod58
a reply to: Tanga36

The F-18 crew has a chance. The Herc crew almost none.

Yeah, That was pretty much my fears. However, I will keep the prayers going until there is confirmation of no more survivors or call off S&R. Not like I can do anything besides send good vibes at this point anyways. Karma is something I'd rather stay on the good side of...got plenty of negative stuff that I assume I am needing to do a lil balancing in karma dept

posted on Dec, 5 2018 @ 09:41 PM
link
At least one source confirmed it was a D model Hornet, but no unit yet. At this point, the odds of finding anyone else alive are slim to none.