originally posted by: luthier
a reply to: network dude

It's obvious you don't understand reality on this subject. It's hardly as simple as the yalk I'll ng points you are buying into.

Drop bombs of knowledge on us.

Sure we are subsidizing the black market for employers. We have more than 11 million labor or trade jobs nobody want to do or is willing to get trained to do.

The labor void creates a necessity for labor and a black market.

The taxpayers than subsidize the low wages given to immigrants while employers enjoy the profit margin.

Blame your Congress for not making a seasonal and temporary Visa program for labor shortages.

But yeah you have it far more figured out than the OP.

The immigrants are the scapegoat.

We are subsidizing states and private businesses growth by paying welfare to the people who are getting paid less than legally allowed in many cases.


It is not only the employers, the citizens in the area like seeing their money go farther. If they get cheaper labor their money goes farther.

Our nation was built by immigrants. BUT, those who came, did so legally, and brought skills and ambition with them. They didn't plop down in a chair in some government office waiting to be called to collect their benefits, they busted their asses after risking their lives to get here. They built all that we enjoy today.


57% of this 63% (of about 20k respondents) are naturalized citizens - which means they are legal.

posted on Dec, 3 2018 @ 10:53 AM
link
The immigrants who founded America arrived with nothing but their skills and a desire to survive. They didn't have rent assistance, food stamps or temporary cash assistance. 1/3 of all immigrant that came returned to their country of origin.
Why on God's Earth did we ever change it? Oh right, for votes.

Not surprising but it's easier for someone without a legal residency to get welfare versus getting a job which they cannot if they are illegal...so the system is actually set up to a greater degree to ensure that they go and stay on welfare...I don't agree that every person that comes into the country wishes to remain on welfare but since there is not push to get people off what do we expect?

From the study itself, rather than the article:

In 2014, 63 percent of households headed by a non-citizen reported that they used at least one welfare program, compared to 35 percent of native-headed households.

source which is also linked in the article

Like all Census surveys of this kind, welfare use is based on self-reporting in the SIPP, and as such there is some misreporting in the survey. All means and percentages are calculated using weights provided by the Census Bureau.

Not to mention that the survey is, indeed, 4 years old.

I think this is just more fear mongering. But that's my opinion.

If the US population is 325 million. That's maybe some 69 million on some sort of assistance.

It's not a small number.

I don't mind government assistance to people living here. But at least make it so that you have to have been paying in taxes for 10 years before you can get any assistance. They shouldn't abuse the system either. 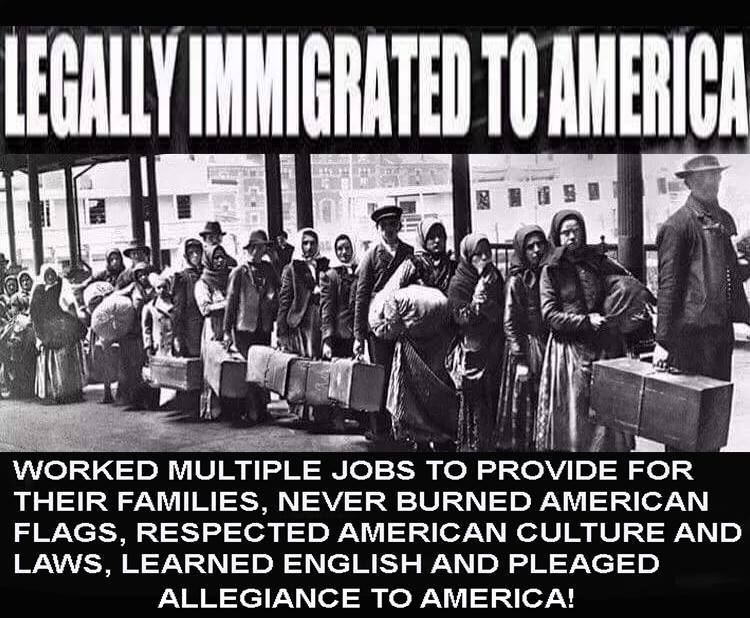 originally posted by: luthier
a reply to: Asktheanimals

Really? You think no illegals have illegally voted?

Back on topic, so it seems what you’re saying if we remove the illegals, the “perceived” wealthy would have to pay an honest wage for labor. Sounds fair to me. Removal of the illegals will also reduce strain on the welfare systems and allow those systems to aid US citizens they were set up to to aid. Now if we could just get the Democrats to understand that! (Think back to when Trump offered 1.8 million non-citizen dreamers amnesty, 1 million more than the Dems asked for, and the Dems blocked the immigration reform).

Uhhhhh green cards were not a thing until about the 50's prior to that immigrants could come and work across the border.


Just a fact. It was only naturalization that you are talking about.

For them, being on welfare is the American Dream.


originally posted by: luthier
a reply to: Asktheanimals

Really? You think no illegals have illegally voted?

Back on topic, so it seems what you’re saying if we remove the illegals, the “perceived” wealthy would have to pay an honest wage for labor. Sounds fair to me. Removal of the illegals will also reduce strain on the welfare systems and allow those systems to aid US citizens they were set up to to aid. Now if we could just get the Democrats to understand that! (Think back to when Trump offered 1.8 million non-citizen dreamers amnesty, 1 million more than the Dems asked for, and the Dems blocked the immigration reform).


Lol nope. What i am saying is nobody will do the job. You have ot backwards.

As a carpenter for 22 years I have been able to work anywhere in the country for good pay. Everyone needs workers and there aren't Americans to do many skilled labor jobs.
edit on 3-12-2018 by luthier because: (no reason given)

originally posted by: ausername
The easiest way to destroy a great nation is to set up an exploitable system of entitlements for the poor then have open immigration from the poorest countries.

You can't really blame the millions of illegals here now, or those that are desperately trying to get here. They have nothing to lose and everything to gain by getting into this country.

Eventually the system will become unsustainable and those social safety nets set up for American citizens in need will be gone.

Maybe then it will matter?


This is why we are a republic and not a democracy. When half a country votes but does not work, that country is doomed

originally posted by: Bluntone22
a reply to: network dude

What's the rate on citizens?
For comparison...

Please don't take this the wrong way, but who the hell cares? If you are a citizen of the United States you earned it. If not you, your parents did. I live in Arizona and went with my daughter to file for unemployment a few years ago when she lost her job for not speaking spanish. When we got there the room was full of Mexicans. That's not being racist it's saying we were the only white people in the room. (NO there were no black people there so don't go there ok). When she was called we stepped up to the window and the woman started talking to her is spanish. We had to wait for her to get someone who spoke English. The office here handles all of those government programs in the same place so it's a little like going to the DMV. After that I started looking around and noticed that every single one of the people who worked there is Mexican. Not a single person in that office spoke English as a first language. The lady we ended up talking to looked at my daughter like she had two heads when she said Unemployment. Like this was a new concept for her. She ended up having to call a second person over, I'm guessing her supervisor, to help her. They spoke to each other in Spanish. I got pissed off and yelled at them This is the United States speak English. People looked at me like I did something wrong. When I looked around the room I saw a room full of Mexican women with at least 2 kids in tow, many of them pregnant. Following this incident my daughter decided to join the border patrol. She's an agent now carrying a gun on the New Mexico border. All her life she had one goal, to make costumes for Hollywood. It tears me up inside to see that dream get crushed by illegals entering this country. If it were up to me I would set up gun stations at our borders every few yards. When I saw someone trying to sneak a cross the border I would open fire, no questions asked. Hate me if you want I don't care. If you do that I guarantee it will stop. I would also send people into Mexico and take out the drug cartel's. The Mexican army won't do it I would. Attack the problem at the source. Bottom line if you want welfare in this country you be required to show no less than 2 generations of citizenship. I am also in full favor of ending that born here crap. I think to be a citizen of this country your parents must be citizens first.

posted on Dec, 3 2018 @ 11:23 AM
link
I wonder if the nationalists here feel Rick Perry should be in jail rather than in trump's cabinet.

Seeing as he allowed millions of illegals to pour into his state during his tenure. The state couldn't even verify their public works dept.


I guess people are quick enough to underatand states run welfare and Republican states have just as many illegals on welfare.

If there are construction labor voids they will be filled illegally. This is basically an arguement that is as old as economics supply and demand.

We made it illegal to work here after the recession because it was a recession and American workers were being protected. We have labor shortages in some industries now. we need a work Visa program. If you are exceptional you get recommended for citizenship by the employer.


It's the employers that don't want the Visa program. They are cheating taxes and their low wages require welfare to subsidize the families of the laborers. Its lunacy.

Dont take my question the wrong way either.
I want to close the border.
The country was built with immigrants but all good things come to an end. It's time in my opinion to taper off the flow.

I was only curious how much difference there was in welfare recipients.

I keep thinking there should be some sort of way for immigrants to earn citizenship, right?

Like, show us how committed you are to your new country - what are you willing to do to contribute??

Are you willing to join the military for at least 2 years?

Something like that... because arriving just to become a sucking sound for decades is unacceptable.