The Fallen Madonna with the Big Boobies Sold at Auction

posted on Dec, 1 2018 @ 03:06 PM
link
For those that don't know the Fallen Madonna with the Big Boobies was a prop , and running joke in British sitcom 'Allo 'Allo which has today sold at auction for £15,000 , Van Clomp's masterpiece was highly prized by occupying German forces in wartime France although it spent much of the war hidden in a knackwurst sausage and other exotic locations by the French resistance.
It survived pretty well. 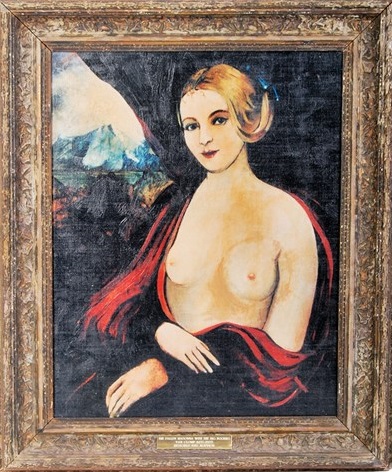 The infamous prop was previously sold in 2007 for £4,000 to a private buyer. Auctioneer Andy Stowe, said the latest buyer was from Nouvion in France where the series was set so "it was going home".

The priceless but elusive masterpiece was the centrepiece to every episode of the classic sitcom. Stolen and relentlessly pursued by the Germans, the artwork was rolled into German sausages, shoved down trouser legs and singed by an exploding gilded frame intended as a gift for Adolf Hitler.

Described as "a rare and important piece of British sitcom history" the prop was one of the few copies of the picture to have survived all nine series of the show
www.bbc.co.uk...

Don't you think that they are more "average" than "big"?

I dunno, I suppose some folks have more money than sense.

That is a lot to pay though, still less than a boob job.

It was a family show so they probably had to keep them reasonable.

originally posted by: TNMockingbird
a reply to: gortex

Don't you think that they are more "average" than "big"?

I dunno, I suppose some folks have more money than sense.

That is a lot to pay though, still less than a boob job.

My thoughts too! If those are big, then I have big ones, and I've always thought I had small to average babies. Cool.