posted on Dec, 1 2018 @ 02:53 PM
link
How does this sort of thing happen in America? Excuse me if I'm wrong, but I never remembered back in the 80's or 90's, this sort of thing happening, so why now? Today, it's OK apparently to be offended by just about everything these days: a person's sexual orientation, a person's political views, a person's view on abortion, or their view on gay marriage and transgender rights. Heck, it's the national past time now to argue for or against the legitimacy of Trump's presidency...but why the American flag? My father served in the military, flying bombers in WW2 and I'm proud to be an American. That doesn't mean I agree with everything that our politicians and/or president have done over the years, because we certainly have made mistakes. However, I'm still grateful to be an American and I respect the men and women who have, or still serve in or military.

I first read about this incident today, from an article that was posted 4 days ago by The Stanford Review. Back in late 2017, a Stanford administrator encouraged the Sigma Chi frat to remove the "American flag flown in front of its house in order to improve its image on campus." Apparently the frat was on probation and this administrator implied that the American flag was a "discomforting symbol" and stated that if Sigma Chi "wished to break away from stereotypes that plagued the house and to change its perception on campus, its members should contemplate un-hoisting the American flag." We're not talking about the flying of a Nazi swastika, or a Confederate flag, but rather a symbol of America and its people...the American flag. 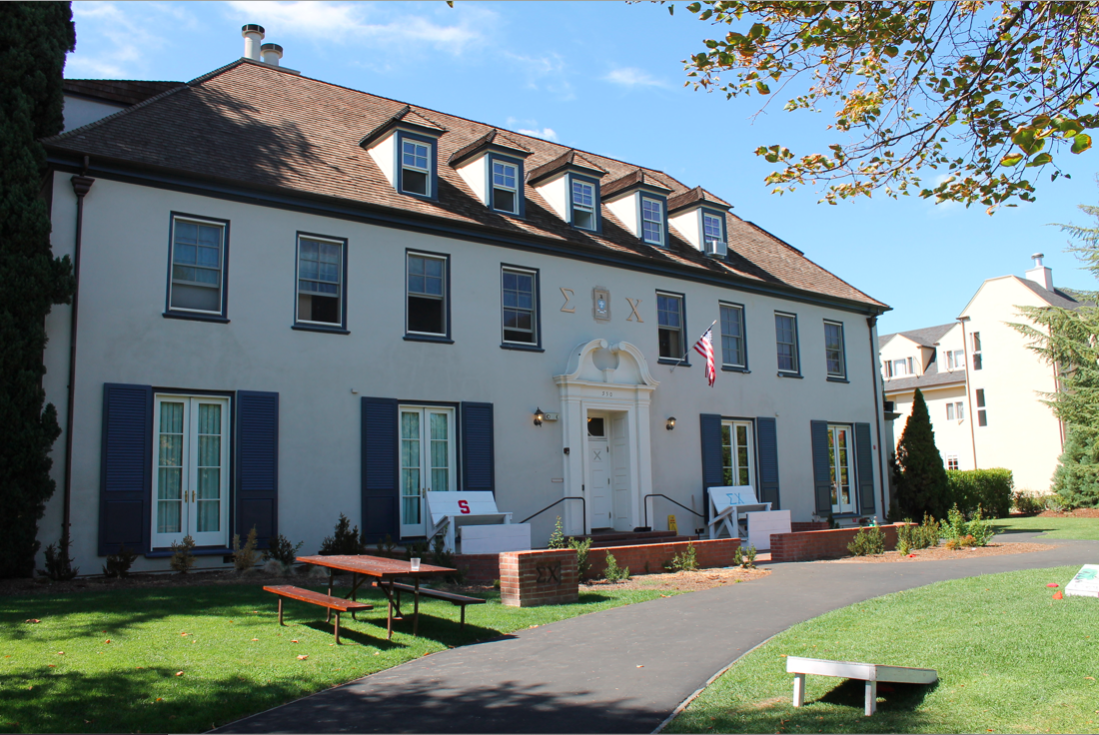 To make a long story short, Sigma Chi no longer exists, thanks in part for its refusal to take down the flag it had flown in front of its house. Matter of fact, after the meeting with the administrator, it replaced the original flag with an even larger one, while the former flag was then framed and placed on display inside the house." Well played young men!

We all know the fate of Sigma Chi: it no longer exists. As is the experience of many Stanford Greek organizations past, while on probation last year, Sigma Chi sought to improve its image with the university so as to ensure its survival and the eventual lifting of its probation. Obviously, this aim was not realized. Sigma Chi is gone.

An administrator assigned to serve as a liaison between Residential Education and Sigma Chi – let’s call him Mr. Z – was, in Lozano’s words, “supportive” in trying to help Sigma Chi outlast probation and “transparent” in explaining often obscure bureaucratic processes.

Mr. Z offhandedly suggested that Sigma Chi remove the potentially discomforting symbol outside: the American flag flown in front of the house. Mr. Z urged Sigma Chi to consider the image being presented to the rest of campus by flying the flag out front. He furthered that if Sigma Chi wished to break away from stereotypes that plagued the house and to change its perception on campus, its members should contemplate un-hoisting the American flag.

In protest of Mr. Z’s suggestion, the house declined to remove the flag, instead choosing to replace it with an even bigger one. Some members, of course, abstained from the discussion about and decision to purchase a bigger flag. The following day, by Lozano’s doing, Sigma Chi upgraded from a three-by-five-foot flag to a four-by-six-foot flag. The former flag was then framed and placed on display inside the house.

Next time you hear someone degrade a symbol of the United States – whether in the form of a flag, the Constitution, or the national anthem – you can defend the principles of this nation through oration or just go out and, like Sigma Chi, buy a bigger one.

We should honor their requests and make sure they don't get a single $ of US taxpayer money or subsidized student loans.

The frat should tell Stanford to eat a dick....

Because commies have taken control of the universities. They have gotten back into the highest political positions, and they are trying to change the country into george orwell’s 1984. Just like you have been told your whole life.
edit on 1-12-2018 by Woodcarver because: (no reason given)

Your story sounds like fake news. Anyone hurt see Kyle the medic:

Only in Communist California.

What a bunch of assholes that much be in charge of that university.

Having read the article in the stanford review im going to say the journalist didnt even bother to get the Universities statement on this. And oddly it was just 1 person that told her this and she took it as fact. They were all ready on probation prior to this. And it doesnt appear they did anything to have probation removed but on the contrary made it worse.

Also apparently there was some image that they had at the university i can oddly even guess what that is because our journalist didn't even do the minimum to post this story.

Bottom line is it doeant look like this flag had anything to do with their demise even though it is implied.
edit on 12/1/18 by dragonridr because: (no reason given)

So I'd wait for more information before getting my panties in a bunch.

posted on Dec, 1 2018 @ 04:24 PM
link
I've experienced this sort of thing at high-end colleges and liberal arts universities. The culture there is much more liberal, and sometimes isn't tolerant of conservative perspectives.

I'm glad someone mentioned that this story might not have all the facts. I get tricked a lot of times by sensationalist stories like this.
edit on 01pmSat, 01 Dec 2018 16:25:53 -0600kbpmkAmerica/Chicago by darkbake because: (no reason given)

The reason for the fraternity being on probation is not the issue here. Did you serve in the military, or one of your parents? I believe, every American citizen should have their "panties in a bunch" over this incident at Stanford. This isn't the first time Stanford didn't allow the image of the American flag to be displayed. They then later reversed their decision.

The Stanford College Republicans were initially denied the ability to use the American flag in their apparel designs.

The university pointed to its trademark guide as to the reason for the rejection. And though the guide doesn’t include any references to flags, a university official said the policy was part of a broader policy intended to avoid associating the Stanford name/logo with specific political perspectives.

After initially rejecting the College Republicans’ t-shirt design because the logo contained a portion of the American flag, a school official said Stanford decided to approve the apparel and is reconsidering its trademark policy.

Sure, Stanford should ban the American flag on campus and return all the money it gets from the Federal government. According to the Stanford website, that was about $1.64 billion last year, most of it coming from us taxpayers. If they are ashamed of the flag, they should be ashamed to take our money.

originally posted by: darkbake
I've experienced this sort of thing at high-end colleges and liberal arts universities. The culture there is much more liberal, and sometimes isn't tolerant of conservative perspectives.

I'm glad someone mentioned that this story might not have all the facts. I get tricked a lot of times by sensationalist stories like this.


true or not, it's good to know there is some common ground with Citizens of the United States of America.

posted on Dec, 1 2018 @ 05:11 PM
link
Stanford is the chief fountainhead of the TRANShumanism Movement.

Much like, as with Berkeley, it always was a core MIC tech fountainhead.

STANFORD, Calif. — The personal computer and the technologies that led to the Internet were largely invented in the 1960s and ’70s at three computer research laboratories next to the Stanford University campus.

That may be because SAIL tackled a much harder problem: building a working artificial intelligence system. By the mid-1980s, many scientists both inside and outside of the artificial intelligence community had come to see the effort as a failure. The outlook was more promising in 1963 when Dr. McCarthy began his effort. His initial proposal, to the Advanced Research Projects Agency of the Pentagon, envisioned that building a thinking machine would take about a decade.

Four and a half decades later, much of the original optimism is back, driven by rapid progress in artificial intelligence technologies, and that sense was tangible last month when more than 200 of the original SAIL scientists assembled at the William Gates Computer Science Building here for a two-day reunion. www.nytimes.com...

They did when they got the bigger flag.

But the # is about to hit the fan for that frat. I hope they're ready for it.

It may or may not have been the flag that led to their demise, but if the administrator in question suggested removing the flag?

The reason this is believable is because there have been plenty of actual stories of people being told to remove their flags - American flags, not any other flags.

Maybe they should have flown the "Californian Republic" flag.....the one with the man bear pig on it......

As everyone in the USA seems to be labelled these days, what type of "American" are you?

Maybe they should have flown the British Union Jack, like the Famous Fathers flew in the background, on the wall of that famous painting, while rehearsing the signing of the "Declaration of wanting to do their own thing, without Mother England".
Boy how did that turn out......


No one is ever rejected because of a high score, It just meant you could go into additional things for example cyber operations. So more than likely you were rejected for a low score since in the military there are minimums for every position.

Well they did it over here in the UK. You dare to have your flag flying high you're a racist. You have the Union Jack in your window, you're a skin head (Racist) etc. etc. they did it to our flag and they're doing it to the US flag. Give it a few years and the only flags that will be accepted will be the EU flag and any middle eastern flag (why middle eastern? because it seems you can attack any nation and people so long as they're not middle eastern or Muslim).

They did. Stanford shut them down.