posted on Nov, 27 2018 @ 12:18 PM
link
I am thinking Hellas. It is one of the lowest points on Mars. The atmospheric pressure is high for Mars. Being deep gives the lander more time to slow down and find a good spot to land. Liquid water can exist and not just sublime away when it gets warm enough. 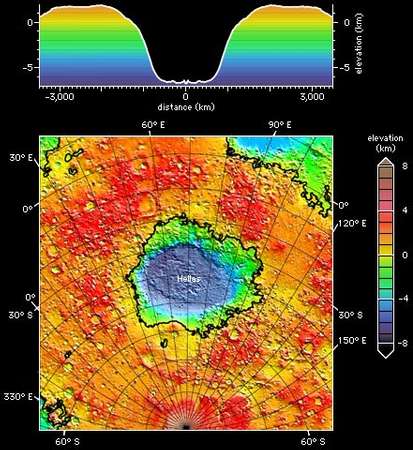 The depth of the crater (7,152 m (23,465 ft)[1] ( 7,000 m (23,000 ft)) below the standard topographic datum of Mars) explains the atmospheric pressure at the bottom: 12.4 mbar (0.012 bar) during the northern summer .[8] This is 103% higher than the pressure at the topographical datum (610 Pa, or 6.1 mbar or 0.09 psi) and above the triple point of water, suggesting that the liquid phase could be present under certain conditions of temperature, pressure, and dissolved salt content.[9] It has been theorized that a combination of glacial action and explosive boiling may be responsible for gully features in the crater.

There are possible glaciers there and could be ice underground. Would want to confirm that or other water sources before committing of course.

Radar images by the Mars Reconnaissance Orbiter (MRO) spacecraft's SHARAD radar sounder suggest that features called lobate debris aprons in three craters in the eastern region of Hellas Planitia are actually glaciers of water ice lying buried beneath layers of dirt and rock.[15] The buried ice in these craters as measured by SHARAD is about 250 m (820 ft) thick on the upper crater and about 300 m (980 ft) and 450 m (1,480 ft) on the middle and lower levels respectively. Scientists believe that snow and ice accumulated on higher topography, flowed downhill, and is now protected from sublimation by a layer of rock debris and dust. Furrows and ridges on the surface were caused by deforming ice. Also, the shapes of many features in Hellas Planitia and other parts of Mars are strongly suggestive of glaciers, as the surface looks as if movement has taken place.

This "honeycomb" terrain was first discovered in the northwestern part of Hellas.[16] The geologic process responsible for creating these features remains unresolved.[17] Some calculations indicate that this formation may have been caused by ice moving up through the ground in this region. The ice layer would have been between 100 m and 1 km thick.[18][19][16] When one substance moves up through another denser substance, it is called a diapir. So, it seems that large masses of ice have pushed up layers of rock into domes that were eroded. After erosion removed the top of the layered domes, circular features remained.

Not sure why we have never set a probe there. Maybe fear of contamination due to liquid water or maybe just a boring place. No probe has ever been sent to the highlands part of Mars that I can think of.

Should the base be on the equator instead? Closer to volcanic activity so lava tubes can be used as the base? In a polar region? Where say you ATS?

Interesting thought, I believe your OP mentions quite a few key points: proximity to water ice plus protection through layers of rock. Maybe something like this: 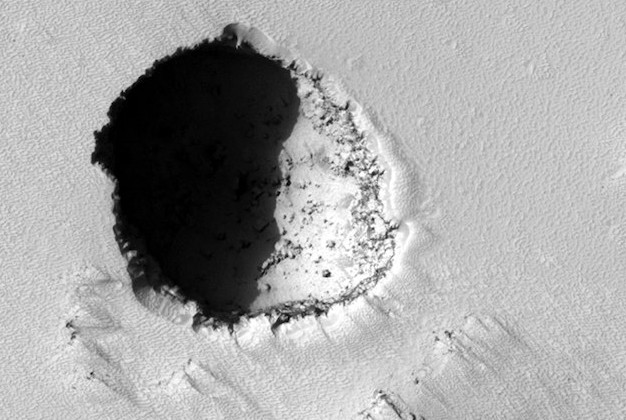 Pictured above is a pit in a region called Pavonis Mons, it's about 180 meters wide and possibly features a cave or ancient lava tube. I guess protection from radiation is key, so using natural cavities would probably be the way to go. If combined with water ice, I'd say we have the perfect combination.

There are a lot of trade offs involved in picking a site. I understand why lava tubes would be a great place, just throw an inflatable base in there and fill it with O2. There maybe valuable minerals to mine in a volcanic area too. But I would rather find a non-volcanic cave or 3D print a protective base from surface material or even dig an underground base.

Absolutely, if we have the chance to get enough hardware down to the surface that's what I'd prefer as well. And not to mention possible cave-ins. A decent geological survey of the area would be required of course.

posted on Nov, 27 2018 @ 01:03 PM
link
The problem with those depressions is shadows. You'd want to maximize electricity production with solar arrays (unless you wanted to take along atomic power.) Being in a crater that cast shadows for any serious amount of time would be a detriment. And you'd want to be in a place that had the resources to make fuel.

We may end up with a combination of surface modules and some extensive underground habitats. Of course, robotic probes and rovers will do the bulk of the work before any humans arrive.

While water ice reservoirs will likely be the ultimate factor, the actual choice of a site will probably depend on lots of other things as well. I'm mostly thinking of certain resources that can sustain a colony, eg. for fuel production as schuyler mentioned above.

The ubiquitous Martian regolith will be used to 3D print whatever we need and I'm fairly certain that an army of robotic helpers will make sure that an extensive infrastructure is in place before the first landing vehicle with human freight on board touches down.

I see your point but it is a large basin, much larger than Gale and I don't see a lot of shadows in MSL photos except near the rims, but the sun will set sooner. Atomic power would be the way to go, gonna need lots of power, multiple sources I would think. Maybe you could even find a nice deposit of methane to burn for energy. A wind mill may be out of the question but with relatively higher atmospheric pressure, maybe.

Fuel can be made out of the atmosphere with power of course.

peh - summit of olympus mons - base with a VIEW

Well if we are going for the view I would like to be close to Valles Marineris.

posted on Nov, 27 2018 @ 01:37 PM
link
Someplace low to the ground (not on a mountainside) on the equator where there's a slim chance of getting some warmth. Something with a nice view. Close to schools.

Years ago for a school project, I used this same spot as a potential landing point due to the higher atmospheric pressure. It's still quite low compared to earth's AP, but provides one of the best locations for landing and colonization.

Thanks for this interesting thread!

posted on Nov, 27 2018 @ 02:06 PM
link
I didn't grow up in the South USA. So when I moved here I learned after buying an expensive plant to divide it in half and plant them in different locations in the yard... sunny, shady, hot and dry, cool and wet. Thant way at least one half of the plant would live and flourish. Then I wouldn't lose all my money on a dead plant. My best guess would be an Arizona environment. Less unpredictable germs. This is actually a horror movie in the making, for at least a few hundred years.

posted on Nov, 27 2018 @ 02:19 PM
link
Vales Marineris. It is one of the most, if not THE most, prominent feature on Mars and I, for one, would very much like to see research being done to determine what caused it. For many years I've been wondering what caused it, until a couple of years ago, when I came across the electric universe theory by David Talbott. As far as I'm concerned, his theory is the one most credible so far.

I know it is a much-disputed theory amongst scholars and on the Internet, I bet there are even people here on ATS who to think otherwise or seem to think they know better (without ever setting foot on Mars), therefore exploring this large Grand Canyon like scar on the face of Mars could conclude for once and for all, whether it came into existence by (water) erosion or that we truly live in an electric universe. Personally, I hope the latter...
edit on 27-11-2018 by 2Faced because: SSDD
edit on 27-11-2018 by 2Faced because: (no reason given)

There are many features on Mars said to be attributed to the electric universe theory. A lot of good research could be done at Valles Marineris and don't forget the view

There are a lot of trade offs involved in picking a site. I understand why lava tubes would be a great place, just throw an inflatable base in there and fill it with O2. There maybe valuable minerals to mine in a volcanic area too. But I would rather find a non-volcanic cave or 3D print a protective base from surface material or even dig an underground base.


Volcanic cave in reference to Mars just means it was formed by volcanic processes, any chance of active volcanism on Mars is pretty much the zero you hit after going below zero.

Active magma or lava should be a leprechaun tale as far as we know.

My own considerations are that any Mars base would need to be self sustaining no matter where it lands, so trying to position near "maybe ice" or "maybe shelter" is a strategy, it isn't one I'd bank on.

I'd rather have regulated temperatures within reason. So I'd go for a warmer region first, consider the extra goodies after. Some parts of Mars have been seen near Earth room temperature. All the way up to 68 Fahrenheit.

So, you could potentially land in a temperate zone that is warmer than some bases we have currently, on Earth. Which means it's very doable from a climate control standpoint.

Cydonia, just to get a closer look.

posted on Nov, 27 2018 @ 03:08 PM
link
Sure there are, as it (shallow craters, rim-craters, craters in a straight line etc.) is all over the place, on larger and smaller celestial bodies, in our solar system, but Vales Marineris has my particular interest.
And indeed the view will be undoubtedly spectacular.

originally posted by: Blue Shift
Someplace low to the ground (not on a mountainside) on the equator where there's a slim chance of getting some warmth. Something with a nice view. Close to schools.

Or maybe Phobos. Keep out of the gravity well.