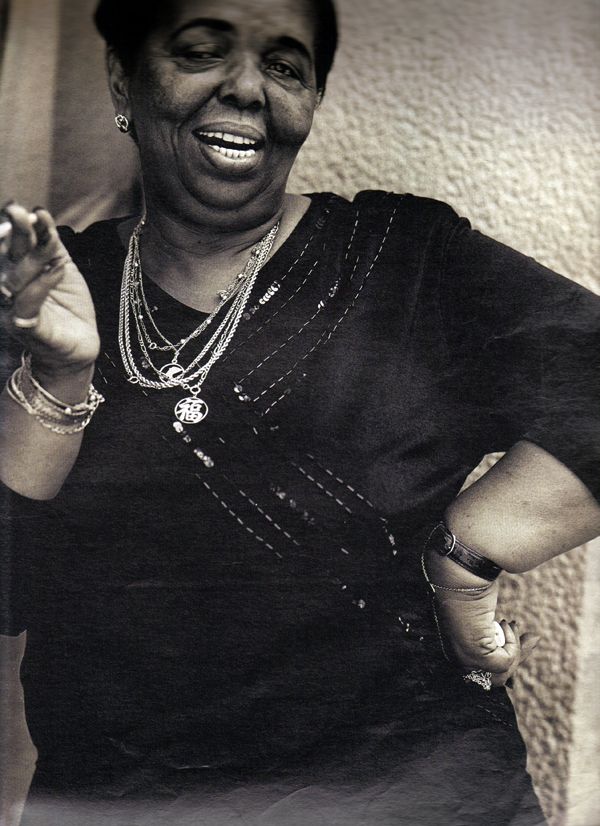 Cesária Évora, (1941-2011) was truly an extraordinary individual. I was mesmerized the first time I heard her rich and lovely voice, but since then have been drawn in by her vibrant and life-loving nature.

Against all odds, she went from orphan to knightess, destitute to diva.
She was born in Cape Verde, one of six children, and when her (musician) father died her mother could not provide for her. She was placed in an orphanage at 10. Fortunately for little Cesária the rest of us, the home she was placed in was famous for music and there she recieved her musical education.
At 16 she was performing in taverns, then she went on to sing on cruise ships in the 60s.
Eventually a local artist invited her to perform a show in Lisbon where she was discovered by José da Silva who took her to record in Paris.

That was the begining of a marvelous career. Music was not the whole of her life either. She served as the ambassador for the UN World Food Program and was knighted by the French Legion of Honor in 2009.

She passed away in 2011, still recieving people from her sick bed up to 36 hours before her death. According to those who knew her, her doors were always open.

Now for the music.
I hope you enjoy, friends!

The first I ever heard of the Barefoot Diva:

I really wanted to emphasize this wonderful quote of yours. Right here contains some of the most valuable things in life (we give up so much in the pursuit of monetary gain).


Hope you have a great day!

Good to see you too

I should clarify that the quote are her lyrics.

She has been formally added to my playlist for today.

Oh! Lol, very funny. I've always listened in her native tongue (the music really spoke to me in this universal language). Your post prompted me to check into her lyrics a bit more and looks like it's a good avenue to go down.
Here's a great article about her if you're interested.


This was natural enough, since she had grown up without shoes, but it became her trademark. Évora sang in Kriolu, a Creole language mixing Portuguese with the west African dialects of her enslaved ancestors. The minor-key morna ballads she sang with such stoic feeling reflected themes of loss, poverty and immigration – all constants to Cape Verdeans.