Using this principle to fly an aircraft has long been, according even to Barrett, a “far-fetched idea” and the stuff of science fiction. But he still wanted to try. “In Star Trek you have shuttlecraft gliding silently past,” he says. “I thought, ‘We should have aircraft like that.’”

Thinking ionic wind propulsion could fit the bill, he spent eight years studying the technology and then decided to try building a prototype miniature aircraft—albeit one he thought was a little ugly. “It’s a kind of dirty yellow color,” he says, adding that black paint often contains carbon—which conducts electricity and caused a previous iteration to fry itself

Unlike its predecessors, which had tumbled to the ground, Version 2 sailed nearly 200 feet through the air at roughly 11 miles per hour (17 kilometers per hour). With no visible exhaust and no roaring jet or whirling propeller—no moving parts at all, in fact—the aircraft seemed silently animated by an ethereal source. “It was very exciting,” Barrett says. “Then it crashed into the wall, which wasn’t ideal.”

Barrett and his team figured out three main things to make Version 2 work. The first was the ionic wind thruster design. Version 2’s thrusters consist of two rows of long metal strands draped under its sky blue wings. The front row conducts some 40,000 volts of electricity—166 times the voltage delivered to the average house, and enough energy to strip the electrons off ample nitrogen atoms hanging in the atmosphere.

Another innovation Barrett’s team came up with was designing a lightweight but powerful electrical system, Walker notes. Before this aircraft, he says, nobody had created a system that could convert power from a lightweight battery efficiently enough to generate sufficient voltage for the thrusters.

Finally Barrett used a computer model to get the most out of every design element in the aircraft, from the thruster and electrical system designs to the wires that ran through the plane. “The power converter, the battery, the caps and fuselage—everything was optimized,” Barrett says. “The simulations failed all the time. We had to make hundreds of changes.” In the end, they had the triumphant Version 2.

The breakthrough offers a great proof of concept showing ion thrusters can be used on Earth....Propellers and jets are still far more efficient than the ion wind thrusters Barrett demonstrated, making it unlikely that passenger planes would switch over anytime soon. But the thrusters have one key advantage: “There’s no sound generation

So i've heard a little bit about ion engines before, usually in regards to space travel, but haven't really looked into it a lot. Came across this though and it seems pretty cool as mentioned in the article it seems like something that would be great for drones and i'm sure if the technology improves it could me made smaller, lighter and more efficient so larger craft could be made.


It is a start. I imagine lightening might bring it down but I am open to this idea.

posted on Nov, 21 2018 @ 12:45 PM
link
You know what scares me about this? I understood completely what this guy was talking about. I am enthused by this, I have turned back into a nerd again. I was a nerd in highschool, I spent most of my life trying to fit in and it was very hard. Now in my sixties I am losing my way and returning to nerdology.

And if they get a cloaking device that would be perfect for surveillance.

posted on Nov, 21 2018 @ 12:48 PM
link
Really wish sometimes when they are doing these sorts of things, they would shut up and not talk so much and let us actually watch the demonstration........

We saw .2 seconds of that "first sustained flight"

originally posted by: rickymouse
You know what scares me about this? I understood completely what this guy was talking about. I am enthused by this, I have turned back into a nerd again. I was a nerd in highschool, I spent most of my life trying to fit in and it was very hard. Now in my sixties I am losing my way and returning to nerdology.

It takes quite a bit of juice, so battery power is problematic.


Ummm...and bug zappers rolled into one...


I love me some dual use products...


They could market it as a mobile bug zapper...a new party fave...

posted on Nov, 21 2018 @ 01:04 PM
link
There are some pulse jet engines that have no moving parts and can power actual sized airplanes. But they're noisy as hell. 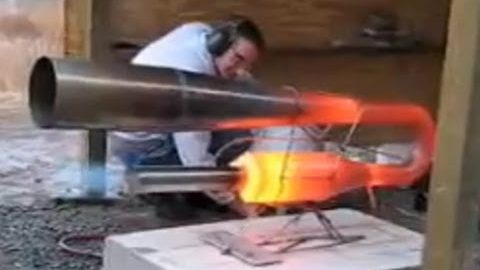 originally posted by: rickymouse
Now in my sixties I am losing my way and returning to nerdology.


originally posted by: rickymouse
Now in my sixties I am losing my way and returning to nerdology.

I own a montgomery wards volt amp battery number nine, a medical box used to electricute yourself which was called a quack box. Strange thing is that now they have the tens machine, which is the same thing but it is deemed a medical tool that has exceptional results. I can electricute myself with that, or use the lawnmower spark plug wire. Microbes die when electricuted, I guess single cell organisms cannot buffer it well, it shorts them out.

So, that plane is an air purifier, killing bacteria as it flies, I could use one of those in my house.

Does it draw less than an electric motor and prop?

Yeah and I can definitely see this happening in the future.
Once police start to get increased funding to fight terrorism or whatever I wouldn't be surprised if they changed from dispatching helicopters to remote controlling a drone from the station.

Probably not in our time but some day police will zap criminals with drones that outrun you.
That is a great movie plot.

Ionic thrusters are actually quite efficient at low speeds, hovering.

The primary issues are low thrust density and high voltages.

They have to make the engine more rotatable. They know this when talking about future aerocraft that is drone like or heli because an aeroplane that uses electromagnitism is the same as a sub using static, practical on small scales though not efficiant enough dynamics for civilized demostrations. Is that not using atomospheric pressure on a less evilutinary scale?, controlling chemicals around you to lift without third party propulsion. There are a lot of factors that you have to consider so it will not be hurt or malfuction from environmental problems, easy & cost efficiant if prototype can prove worthy. I think this is more of a shuttle to atmopheres outer layer in the future applications so we can implify space travel equiptment in the craft, though it can be used for modern domestic aerospace transportation at best for now.

Brilliant, instead of satellites cheap and repairable solar powers high altitude long duration array's that would stay on station and fly in the stratosphere, of course they would have to be huge, light and be able to charge enough power to keep them flying at night to stay on station but instead of having to launch new satellites every couple of years these thing's could simply be landed for upgrades and scheduled maintenance.
The fact there are no moving part's make this even more potentially a possible future scenario because there is less material fatigue and fewer part's to wear out.

While Satellite's will always have the high ground it is pretty cluttered in orbit with lot's of ballistic velocity debris flying around and so far no real viable solutions to clean it all up so with such thing's as lighter than air solid's which in theory could be used to fill the void's inside the wing's of such an aircraft and other emergent material technology's we may some day see distant aircraft very high in the atmosphere maintaining station for everything from telecommunication's to most job's that civilian satellite's currently perform and potentially a hell of a lot cheaper since these thing's will be able to take off and land at specialized runway's and facility's as well as being able to potentially fly for years without having to come down for maintenance.

originally posted by: Phage
a reply to: ManBehindTheMask

It takes quite a bit of juice, so battery power is problematic.

Getting smaller and lighter all the time as you know and at higher altitudes for those application's passive cooling may be a potential resource to allow sub room temperature super conductors to also be used in these contraption's.

Likely even if they can not generate solar power enough to fund the requirement's of the ion drives which are probably very hungry indeed then some other source such as fuel cell's may provide enough on board energy for week's or even month's long duration flight's of these craft.