Are We Being Prepared For A Huge Disclosure Event?

The discovery of a huge impact crater under the ice in Greenland is announced. I wrote a thread about it:
Only 12,000 Years Ago A Meteor Impact Created A 19 Miles Wide Crater In Greenland

A meteor explodes with 2.1 kilotons force 43 km (27 miles) above ICBM early warning radar at Thule Air Base, Greenland, about 150 to 200 miles south from the impact crater announced on Nov 14. There were a couple of ATS threads about this:

First public announcement for a movie titled Greenland - Director Neil Blomkamp (District 9), Actor Chris Evans (Captain America) - no release date yet. It was originally set to start shooting in October but that was delayed to early 2019. Greenland is a science fiction action film focusing on Jeff (Evans), who has to get his family to the safest place in the world before a major event takes place that puts them all in danger. That place of course is Greenland.

Houston, we have a pattern! That movie is even more intriguing as there simply are no other mainstream movies playing in Greenland with the notable exception of Smilla's Feeling for Snow (1997) which in turn is referenced in The X Files (1998) movie.

In 1859, a meteorite streaks across the sky and crashes into the Gela Alta glacier in western Greenland, causing a massive explosion that kills an Inuit fisherman.


Smilla meets Nils Jakkelsen, who helps her discover videotapes revealing the truth about the Greenland operation—the discovery of an energy-producing meteorite that Tork believes will give his company a dominant position in the world.


Smilla's father shows her medical x-rays of Greenland Mining accident victims that reveal the presence of a lethal prehistoric "Arctic worm" thought to be long extinct. He explains how the presence of these worms inside a person's vital organs causes toxic shock and death. 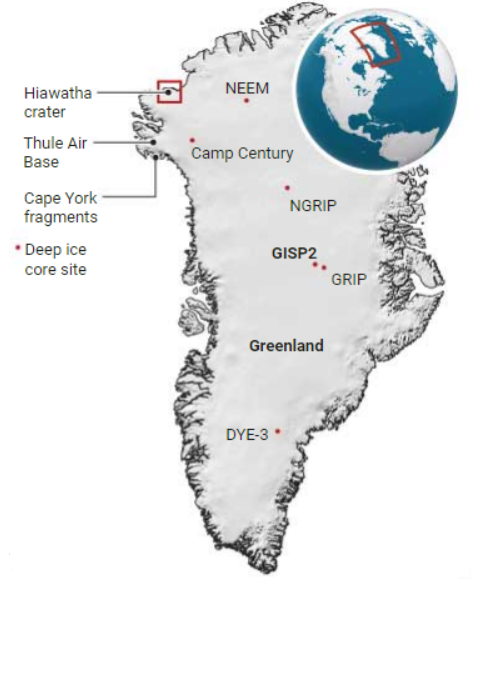 I think somebody knew about the existence of that huge impact crater long before it was publicly announced on Nov 14. It has something to do with that other spot close by. Camp Century, 150 miles east of Thule Air Base. The Hiawatha Crater is hidden under a mile of ice. Enter Project Iceworm.

The secret Project Iceworm was to be a system of tunnels 4,000 kilometres (2,500 mi) in length, used to deploy up to 600 nuclear missiles, that would be able to reach the Soviet Union in case of nuclear war. The missile locations would be under the cover of Greenland's ice sheet


To study the feasibility of working under the ice, a highly publicized "cover" project, known as Camp Century, was launched in 1960. Unsteady ice conditions within the ice sheet caused the project to be canceled in 1966.


I think Project Iceworm was either a dual purpose project and one of the goals was to tunnel to whatever is at the bottom of that crater or it was simply just a cover for doing so. Think about it: the official goal was to build 2,500 miles of tunnel under the ice. To get to the crater they only would have needed to tunnel about 200 miles.

So what could this all be about? I have several ideas and they are all fascinating, to say the least. But right now I don't have the time to expand.

Over to you ATS!
edit on 21-11-2018 by MindBodySpiritComplex because: (no reason given)

posted on Nov, 21 2018 @ 11:33 AM
link
I used to think so but no we aren't. I've come to the conclusion after years of research that the UFO's are from this planet, either an ancient or lost or hidden civilization or black projects from lockheed and the military industrial complex..

could be bankers too.. Rothschilds and Rockefellers probably have some sweet tech sitting around

No. I wanted to write more but that's all it took.

Australia is a continent, Greenland is an island.

Australia is a island. Greenland may look big on a map but it not really that size in real world.

Thule, what an interesting name, was vrill air base not available ?

I'd like to hear your expanded thoughts, right now with what you have presented I can neither make heads or tails of it.

Your on a roll! I am loving your thread as of late, brings back memories about ATS of old.

Somewhere in Greenland has coordinates of 666 think, i remember checking that one time but cld be wrong m.youtube.com...

originally posted by: samuelsson
a reply to: MindBodySpiritComplex

Your on a roll! I am loving your thread as of late, brings back memories about ATS of old.

I agree. One the best threads in a long time. I'm so sick of politics and partisan puke.

Disclosure, maybe... maybe not, but interesting info and with linking them together nonetheless.

posted on Nov, 21 2018 @ 08:31 PM
link
I'm familiar with the Army building projects in the 1960's but never heard of the impact craters. Lots of conspiratorial angles to all this; perhaps the Northern cousin to what's going on in Antarctica? Great thread and thank you for bringing back good old mysterious stuff.

posted on Nov, 21 2018 @ 10:47 PM
link
The people on this rock are already dysfunctional. What good would come from a 'disclosure' even if there was something to disclose?? People would riot, loot, rape and murder...just because.

edit on 22-11-2018 by MissionTruth because: left out where to purchase

posted on Nov, 22 2018 @ 01:04 AM
link
Yes we are being prepared. It was all greenlighted last year and will go for next few years but I fail to see what is has to do with Greenland. Are you suggesting that it might be some sort of ancient UFO crash site? That's fascinating.

Is Australia a continent?, is it not Australasia the includes new Zealand, Fiji etc

Australia is a island. Greenland may look big on a map but it not really that size in real world.

"This is air traffic control in Melbourne Australia. Please circle the island three times to confirm visual sighting before preparing to land. Thank you."