posted on Nov, 21 2018 @ 05:30 AM
link
The Pascagoula UFO Incident is one of my few remaining favourite cases mainly because the story is so out there it could just be true , Calvin Parker and his friend Charlie Hickson claim to have had an encounter with a UFO and strange robotic creatures in 1973 while fishing the Pascagoula River.
Charlie Hickson wanted answers but Calvin Parker just wanted to forget about it and move on with his life.

The interview was aired yesterday and starts at about 25 min on the video.

Here's a thread by karl 12 with some background on the incident for those new to the case.
www.abovetopsecret.com...

Copy of the recording of the pair discussing the incident between themselves recorded in secret by the police at the police station.

Truth or fiction , you decide.

Nice, and i thought pancakes from space was a weird one.

Heres what I think is a complete transcript of the interview with police.

The video is over 30 minutes long so I haven't gotten through it all yet, I opted for the written version. Thanks for posting I have never heard of this case before.

posted on Nov, 21 2018 @ 09:20 AM
link
Interesting transcript - that "giant eye with an attachment" could have been a portable MRI scanner.

It's an interesting coincidence in time. I've always noticed that the medical procedures described in these UFO reports do describe real world medical practices. Taking samples of amniotic fluid is done by inserting hollow needles through belly buttons. It is possible to detect cancer through the chemicals released in exhaled breath. There are ILP therapy systems that can remove skin blemishes. The state of the art in medicine is through Da Vinci machines that let surgeons operate on a person using keyhole surgery.
edit on 21-11-2018 by stormcell because: (no reason given)

I read this story in a book, it's up there with the Travis Walton story.

I dunno, but it is certainly an odd story, Most stories have greys, nordics etc but this story...either sleep paralysis or the real deal but what do I know...

originally posted by: data5091
This incident stays on my radar as a classic !!

Yep , even though I am more of a skeptic these days Hickson and Parker's story still has me interested.

posted on Nov, 21 2018 @ 10:02 AM
link
One I still have a soft-spot for too. That was pretty much the story that caught my attention and set my young mind a turning. The tape is convincing that they had both just experienced something that blew their minds. Good ol' boys too.

Funny, I just came across an oldie--the Flatwoods Monster--that I dismissed the first time I came across it. I'm liking it too. Not as intense as there was no abduction, but maybe falls somewhere in the spectrum between a Pascagoula and a Cash-Landrum.

posted on Nov, 21 2018 @ 10:36 AM
link
Ive read a book or two on this encounter cause it always intrigued me. Thing that caught my attention is how the sheriff separated them and interviewed them individually. The sheriff was convinced enough to forward it all to a military base nearby. Many thing can scramble your mind, but what are the chances of them hallucinating the same thing. They had nothing to gain from the story,

Good stuff Gortex, it's a great shame that a specific NSW news clipping PDF file doesn't work any more as it featured quite a number of separately located UFO witness reports from the same time and area of the incident.

The article below describes a few of them and there's even a USO one found here.

A Pascagoula city councilman said he saw a luminous UFO the same night of Hickson's and Parker's report on the way to a church service in Vancleave.

Pascagoula Patrolman Bill Gennaro stopped on Beach Boulevard to talk with a group of people and they saw an oblong-shaped, blue-haze object zip to the north.

About 3,000 motorists from Mobile blocked Interstate 10 when they heard of a possible rendezvous with UFOs at the Mississippi line.

A cab driver in Biloxi said a UFO caused his taxi to stall out on U.S. 90..

Instead of UFO it's a best case for I dunno.

There's no explanation that covers the angles and I don't think they made it up. It leaves an incident with far more questions than answers.

This is a great example of the 1% or 0.1% of the cases which are genuine in my opinion. I wouldn't be surprised if there was some sort of mass emotional trauma occurring in that region at that time, so as to trigger this type of event.

I listened to an interview with Parker last month where he spoke for an hour with barely an interruption. There was no escape from being baffled.

Best explanation I've got is someone hit 'em with '___' spitballs and messed them up when they were tripping. It's as good as any. 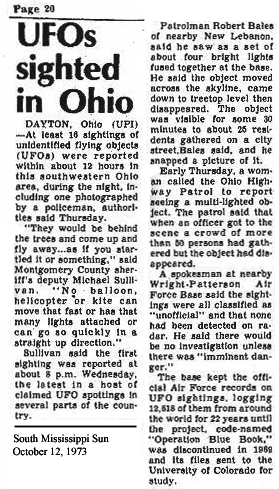 It's entirely possible that there are ONLY prosaic answers to all known or unknown 'incidents'.

I don't actually buy that however.

In my view, for those 'supernatural' appearing cases, I think that some of glowing ball with floating tentacles is actually pretty close to being a 'true-ish' form for the phenomenon.

I know that the tendency is to assume that the phenomenon has no true form whatsoever.. and perhaps that's true.. but I think it's entirely possible that some 'less cosmic', closer to mundane sort of energy lifeform probe type thing might indeed look similar to what many people have seen...

But i don't know of course.

It's likely to be quite some time, before any human actually 'knows'. Maybe never.
edit on 21-11-2018 by KellyPrettyBear because: (no reason given)

posted on Nov, 21 2018 @ 10:03 PM
link
I love this case. This guy is just so down to earth. You listen to interviews and you try to gauge people as to whether they would lie or make up stories and most of the time, you just don't know. Maybe some will say in this case, you don't know but it is one of the few that I can say with confidence, they didn't make it up. Whatever happened, this man believes what he is saying and they were shaken by something when they had their encounter.

Some of us spend a great deal of time wondering what these objects are and who is inside them. I can't imagine what my thoughts would be if this happened to me and I had to spend the majority of my life wondering about one event and not really having a clue at to what the hell it was and where it came from.

Those angry islanders have been in the news again. The ones who throw sticks at 21st Century technology and are the poster children for 'get off my lawn.' The Sentinelese.

I like the analogy between 'civilisation,' their little island and visiting strangers. Nobody can interact with them in fear they'll be wiped out by our sniffles. People can't visit openly because they'll be killed and have their heads displayed as trophies. Their genome is comparable to an ice core sample from millennia ago. Relatives from the island cluster still have the distant signatures of Heidels in their genetic makeup.

Probe-wise, who knows? The Folk from Elsewhere appear to keep a distance. Victims are withdrawn to those brightly lit rooms and tampered with in seemingly clinical environments. There's such a commonality of humanoid body forms that perhaps we're similar to the Sentinelese in being an isolated tribe subject to research ventures.

I don't know and I'm not trying to make the case. Some of the reports just provoke more ideas of physically solid structures than others. The men described rough, physical contact and then being in a solid environment. Parker said he received a cut (on his arm iirc) in the incident and tossed/burned the stained shirt in a panicky, horrified state of mind. He said something like he stayed in the shower for a long time in fear of their germs.

Some will argue that 'he said' doesn't mean # and it's right enough. I don't feel inclined to dismiss small details like that when I can't explain the broader details.

Well I don't know if you tend to read my posts or not.. but I'm increasingly wondering if there is at least ONE more solid type of probe out there.. about 15 feet across and trailing tentacles. Now, even in the case of this 'more solid probe', I'm fairly convinced that it must drop in from above our 4D spacetime.. so that while it's 'solid' while here.. it's not native to our space-time. It might even be something more akin to 'solid light'.. but I'm granting the 'solid', at least temporarily.

The reason that I'm not a big fan of 'solid', is that it takes ludicrous speed (a funny there) er.. ludicrous amounts of energy to make matter approach the speed of light.. such that you couldn't bring enough fuel with to make it happen.. and even then, if a spec of dust hits you, you explode. Matter and 'going really fast' just don't work. A more advanced species/lifeform would be information-based, and would either pop in and out of higher dimensional space (as in String theory, not metaphysics) and would also just use energy forms "possessed" by their information. This is almost certainly how the advanced species do things..they would NEVER waste time with nuts and bolts. Just like we won't for that much longer either..


The Coyne / Mansfield Incident took place about a week later on the 18th.


Interesting , thanks for the add.
Seems October 1973 was a Ufologically busy month.