The state of Victoria signed on with China’s Belt and Road initiative at a time when intelligence officials are concerned about Beijing’s influence.


Under President Xi Jinping, China has pledged trillions of dollars over the past five years toward the construction of roads, power plants and ports throughout Asia, Africa and Europe. The Belt and Road initiative, a key foreign policy of Mr. Xi’s government, uses big infrastructure projects as way to win friends and spread influence.

That money often comes with the requirement that Chinese companies be heavily involved in planning and construction, and Chinese employees are often brought in for the work, minimizing the immediate economic benefits to the country hosting the project.

“Howard famously argued that Australia didn’t have to choose between its economic relations with China and the alliance with the United States,” said Michael Clarke, an associate professor at the National Security College at Australian National University. “Clearly, both of those assumptions no longer hold with President Trump’s ‘America First’ approach and China’s assertiveness under President Xi Jinping,” Mr. Clarke said.

Wow. At this point its anyone's guess how long China has been influencing/infiltrating the governments of this and other Pacific and Asian countries in its orbit.

How anyone can be blind to China being the real threat to anyone not named China is beyond me.

They don't walk around swinging their d1ck around like western empires. Ask Tibet about Chinese overlordship. China is actively sterilizing the native Tibetans whilst colonizing with it's freakish amount of Han Chinese. Soon Tibetan will be a minority in Tibet, which has been a rival of China since Tibet first became an empire ~1,500 yrs ago. Western powers enslave, China assimilates through colonization. Been this way since China became China.

That is how China became China, actually! Warring states of Han Chinese unify and assimilate all other local ethnicities whilst expanding into the Tarim Basin and moving these lower ethnicities to new frontier colonies, mixed with Han bureaucracy and elite. So the dispossessed land becomes assimilated by Han Chinese and voila 200-300 yrs later those not ethnically Han are foreigners in their own homelands.

Comparable to the White subjugation of the American Natives, but done in a more covert manner.

That's not the game they play. I've been a tech worker in three countries. I moved to Canada in Toronto and Vancouver. There, there were thousand of Chinese graduates from Hong Kong. They went to the universities to get an education, but found it hard to find work, because the hiring managers were European. So affirmative action programs were made to prefer an ethnic minority graduate over a European one. The European ones then went to the USA. Vancouver is now around 50% Chinese, and they all own what used to be the middle-class white family homes. It's a status symbol to have achieved the American/Canadian dream.

The same thing happened in Silicon Valley. They attend the universities, complain that they are under-represented in the local job market, get affirmative action programs to get them jobs, work for a company for a couple of years, then work for a startup and/or go back to China. Same thing is happening with the housing market. They buy up what used to be white middle class homes which are now priced with a "lucky house price" that existing resident families can't afford.

I returned to my home country. Did a PhD there. That was sabotaged when an alumni student from China demanded I hand my work over to him. I refused and all hell breaks loose. End up being frozen in time for four years.

They don't need war. They just need to displace the young resident population and the land becomes theirs. From a viewpoint of a champagne Socialist, someone waving a great big wad of cash worth billions in front of their face in exchange for providing technological assistance seems a big dream come true. They don't realize it is destroying careers and businesses.

Can you prove any of what you opinioned on.

Tibet is safely in the hands of China who has it as a buffer to the hordes of India.

Look up the real history, it is not hard.

posted on Nov, 15 2018 @ 06:20 AM
link
I don't even think the CPC would need mainland China at this point. They have so many connections abroad, to other Communist Parties, that Communism itself is a stateless, amorphous force that may very well have inserted itself into countries the world over. The CPC is essentially just a branch of a political force that has stretched its tentacles across the world. And the ironic part is they're more State Capitalist (at least the Chinese variety) than they are full-blown Communist.


Others have said Mr. Andrews cut a deal with China for politically opportunistic reasons: His state government goes to the polls in less than two weeks.

When our States are constantly in battle with Canberra over GST revenue sharing, this investment by China is good for the "looks" for the Premier for votes.


Morrison knows damn well that the intelligence dudes have been concerned for a "long long time"/LOL.

It was the previous admin under Turnbull when Bishop started spanking China. We were also asked by the US to start "exerting" push by sending our Navy to the disputed Islands in 2017 ( I think..too lazy to look it up ).

If any one really wants to research this there is a thread from around 4 years ago where it was stated that the Globalists will instigate a fake Hot war between the US & China, but it will be a swift short war to drop the US as a reserve currency and bring in the Chinese Yuan to take its place.

This is why China has been amassing Gold on the quite. All part of the New World Order Plans.

CHina will be allowed to have its place in the Sun for the next 100 years. Just like the last Century under the US.


How anyone can be blind to China being the real threat to anyone not named China is beyond me.

The "real threat" as opposed to US hegemony?

How any one can ignore the US encircling China and Russia with more land bases ( Prior to China building Islands ) is beyond even my grandmothers rudimentary knowledge of world affairs.

You get it...American exceptionalism ignores this

I mean just listen to Lysergic, I mean the US wasn't in Vietnam bombing nobody so they are the good guys

Never mind the fact that 50 yrs ago they had to push back against the US . lol lol


They buy up what used to be white middle class homes which are now priced with a "lucky house price" that existing resident families can't afford.

I returned to my home country. Did a PhD there. That was sabotaged when an alumni student from China demanded I hand my work over to him. I refused and all hell breaks loose. End up being frozen in time for four years.

We're facing the same housing bubble brought on by Chinese & our own population. A whole demographic of millenials are permanent renters with no hope of ever saving a deposit to get a loan.

My sons Uni classes had the same sh^t, they were supposed to collaborate in group assignments, my son did most the work they lazed about, inputed less than 5% and got the credit - we advised him against taking it further. If yuo rock the boat you get penalized as they spent more getting their degrees...go figure.

originally posted by: TheConstruKctionofLight
a reply to: Lysergic

I mean just listen to Lysergic, I mean the US wasn't in Vietnam bombing nobody so they are the good guys

Never mind the fact that 50 yrs ago they had to push back against the US . lol lol


They can try to find reasons to paint country x or y as 'evil' but the track record is never in their favor...

Their only defense are ad homs... Those don't even work anymore.

No real rebuttal will be put forward.... Ask every middle eastern country and African countries with no way to fight back when the US touches down on their homeland... What they really think

Funny enough, the US isn't threatening to bring 'democracy' to China or Russia.. Are they? Only bring that to countries which couldn't possibly have a militaristic chance... Go figure. Very strange indeed

posted on Nov, 15 2018 @ 02:00 PM
link
One cannot be opposed to both US and Chinese expansionism? When did that happen? ALL of the UN Security Councilors are really on the same side behind the scenes, laughing as they crush smaller countries under their boots with reckless and psychotic abandon...
edit on 15-11-2018 by IndyFront because: (no reason given)

Maybe you can look into China stealing every piece of land it can from everyone it can. Just wait until China is strong enough to challenge the US and see what they steal from the Aussies. America is far from perfect, but if you think America is worse God help your children and what they will deal with if China wins this new 'cold war'. 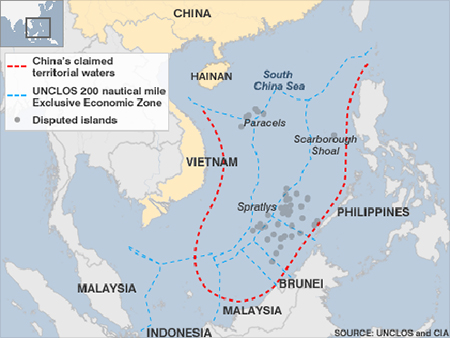 Care to point out what land China has stolen?

Our generation and my childrensare paying a hefty price for the cushy ride the Americans enjoy thanks to the US petrodollar and the exporting of US inflation.

You worry about CHina and yet US manufacturers sold out and and rebuilt in Asia & Mexico over the last 20 years. LOL wheres those jobs now?